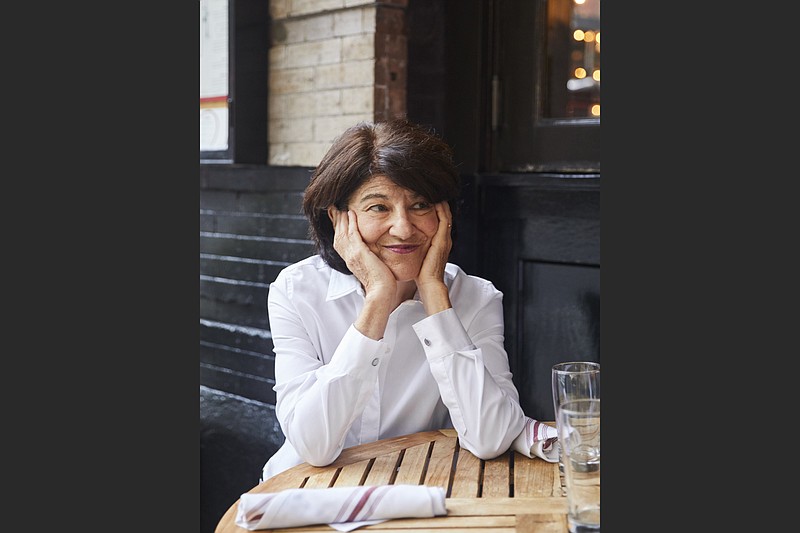 Julie Salamon wrote the 1991 book “The Devil’s Candy” about the making of the movie “The Bonfire of the Vanities.” Salamon’s recordings of the stars and director of the film were adapted for the new season of “The Plot Thickens” podcast. (Winnie Au/The New York Times)

One day in December, Julie Salamon was sorting through stacks of old plastic boxes at a storage unit in lower Manhattan. Salamon, 68, is a journalist, author and self-described pack rat. The boxes were accidental galleries in the museum of a life's work, filled with relics — notebooks, clippings, photos and tapes — accumulated for the dozen books Salamon has published since 1988.

Salamon had come looking for a box that contained material from her second book, "The Devil's Candy," published in 1991. She had recently agreed to adapt the book — a celebrated account of the making of the infamous box-office flop "The Bonfire of the Vanities," based on Tom Wolfe's sweeping social satire of 1980s New York — for the second season of "The Plot Thickens," a Hollywood history podcast from Turner Classic Movies.

Salamon was hoping to find a trove of mini cassette tapes, recorded on set over the entire course of production of "The Bonfire of the Vanities." Audio from the tapes contained unusually candid interviews with the director, Brian De Palma, his crew and the film's stars — Tom Hanks, Bruce Willis, Melanie Griffith and Morgan Freeman — and would be a crucial component of the podcast.

But when Salamon eventually found the "Devil's Candy" box, the tapes weren't there. Distraught, she returned to her apartment in SoHo and resumed searching. It was there, a couple of frantic days later, that she found several zip-close freezer bags full of mini cassette tapes in the back of a large home office cabinet. The bags hadn't been opened for 30 years.

Making the podcast, which recently ended its seven-episode run, was a late-career twist for Salamon, affording her the rare opportunity to revisit the story of a lifetime three decades later. But, as the author knew better than anyone, adaptations are never simple — at least not when "The Bonfire of the Vanities" is involved.

"Putting this podcast together gave me an extra appreciation for Brian's dilemma," Salamon said. "At first you don't have any idea what you're doing, but then you just start doing it."

When it arrived on bookshelves in 1991, "The Devil's Candy" stunned Hollywood. It painted a vivid and well-sourced portrait of an industry few outsiders had seen up close. (Or would see today — armies of studio and personal publicists keep journalists from getting too close.) Salamon, then a film critic for The Wall Street Journal (she later worked for The New York Times), had befriended De Palma, who, by the late 1980s, had made hits like "Carrie," "Scarface" and "The Untouchables" but was in something of a career slump. With his participation, her book portrayed the world of big-budget studio filmmaking as a high-stakes battle, in which three mercurial factions — the artists, the executives and the audience — are ever at odds with themselves and one another.

At the center of the story was what remains one of the most notorious train wrecks in movie history. "The Bonfire of the Vanities," as written by Wolfe, was a kaleidoscopic account of greed and cynicism in the "Me Decade," filled with characters who were easy to hate and hard to look away from. The book became an instant bestseller and media sensation in 1987, making it all but inevitable that someone would try to turn it into a movie. But its sharp edges didn't survive in Hollywood. Warner Bros. pre-emptively defanged the story's central character, a slithering bond trader and self-proclaimed "Master of the Universe" named Sherman McCoy, by casting Hanks, recently of "Big." Its memorably pitiless ending also got the ax. In its place was an invented scene, in which Freeman, playing a judge, delivers a discordant moral sermon.

Behind the scenes, the project was plagued from the start. Its biggest initial cheerleader, a powerful producer named Peter Guber, left the studio before production began. That set the stage for a showdown between De Palma, a withdrawn and exacting visionary, and executives at Warner Bros., who were anxious to protect a bloated $50 million investment. De Palma, who was uninterested in oversight, shut executives out of key aspects of the production. The executives fired back — at one point, they threatened to hold him personally liable for cost overruns.

No one who worked on the film — not even Salamon, who observed the shoot and sat in on meetings — recognized it as a creative failure until it was screened for test audiences. By then it was too late. Critics savaged "Bonfire" — "gross, unfunny" and "wildly uneven," declared The New York Times — and moviegoers shunned it. It made less than $16 million at the box office.

The podcast version of "The Devil's Candy" maintains the basic narrative of the book but adds new layers. The most potent is the audio, rescued from Salamon's freezer bags. Throughout the series, retrospective narration gives way to contemporaneous recordings that capture events as they happened. The recordings also transform written characters into living, breathing people. Everything you need to know about the particular breed of difficult movie star Bruce Willis was in 1990 — ever-present bodyguard, rude to assistants — is there in the snotty tone he uses in his interviews with Salamon.

"For me, the tapes really add a richness that wasn't possible otherwise," Salamon said. "I like to think I'm not a bad writer, but there's no way that you can write anything that's as moving as just hearing a person tell their story."

Salamon also wanted to build on the book by adding new reporting and interviews. Many of the more emotionally compelling moments of the podcast stem from the transitions between then and now, record and memory. One of several indelible figures from the book whom Salamon reinterviews is Eric Schwab, a second-unit director on "Bonfire" and protege of De Palma, who was poised for a breakout career before the movie bombed.

"So many people who worked on the film were at a turning point in their careers," said Angela Carone, the director of podcasts at TCM who edited the season with Salamon. "We get to tell their full stories on the podcast in a way that isn't in the book."

Not everyone who cooperated with the book returned for the podcast. None of the film's stars sat for new interviews (TCM said the recordings were legally Salamon's property and that it notified those whose voices are used in the show). Nor did De Palma, though Salamon said the two remain good friends. (Through a representative, the director and the stars also declined to speak for this story.)

For Salamon, working on the podcast was a strange and emotional experience, forcing her to reflect not only on her characters' journeys but her own.

When she first considered what would become "The Devil's Candy," in 1989, she was a frustrated novelist working full time at the Journal while carrying her first child. The book became an instant classic of its genre (it's still regularly taught in film schools) and changed the trajectory of her life.

"To hear those voices transported me back to that moment," Salamon said, describing what it was like to listen to the tapes for the first time. "I was starting a new life and becoming a young mother and transitioning into a new profession that I loved. It was overwhelming. I was on an adventure."