TELEVISION: Jay Leno's reboot of 'You Bet Your Life' on CW 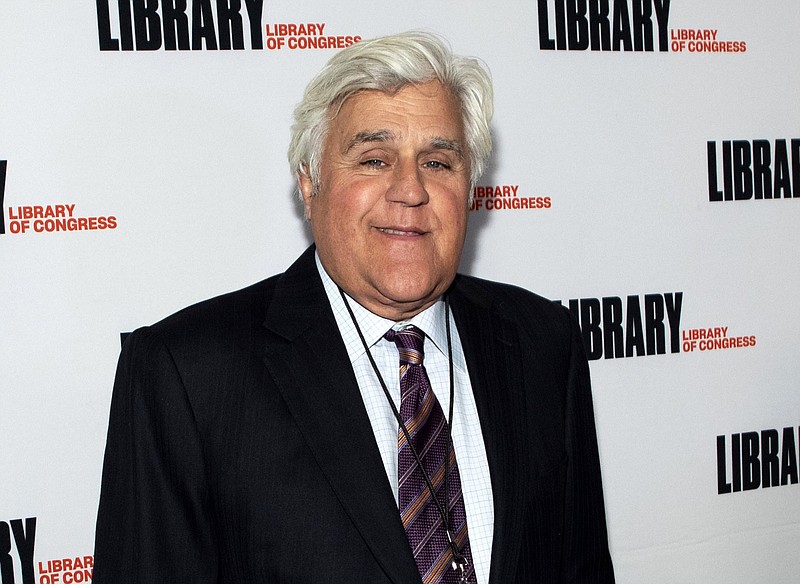 Since his longtime late-night gig ended in 2014, Leno has kept up a brisk pace. He pops up regularly on TV projects from fellow comedians Jerry Seinfeld, Larry Wilmore, Tim Allen, Dennis Miller and others.

His passion for anything with wheels and an engine is on display in "Jay Leno's Garage," returning Wednesday on CNBC. And he's got a new game show, a syndicated reboot of "You Bet Your Life," that debuted Monday. (Locally, it's on the CW, KASN, weekdays at 5 p.m.

"Everything past 'The Tonight Show' was gravy," Leno said. "So the fact I have anything going is fun."

"You Bet Your Life" first aired from 1950 to 1961 with famed comedian Groucho Marx, followed by a short-lived 1992 remake with Bill Cosby. In the new version, Leno shares host duties with Kevin Eubanks, the former "Tonight" band leader who'd gleefully rib the comedian when a joke fell flat.

"People seem to like that camaraderie, because we are friends and we know each other," Leno said.

One of Leno's temporary jobs, a guest judge on "America's Got Talent" in 2019, had serious repercussions. He was condemned for making an unaired joke about Koreans based on a racist stereotype, and later apologized.

In an interview with The Associated Press, Leno discussed following in the game-show footsteps of a comedy great, what makes for a good contestant and the risks of topical humor. Remarks have been lightly edited for clarity and brevity.

Why add the game show to your plate?

It seems like the time is ripe for this kind of show. It's really light and it's fun and has no politics involved. And it's very diverse. We have people from every walk of life: Black, white, people from Nigeria, India. But there's never any silly stereotype nonsense, it's just people coming together and trying to win some money. And it's really been a lot of fun. We shoot six episodes a day and they just fly along because it's all ad lib. I don't see the contestants before the show. There's no PR person going, 'Do not mention my client's cocaine bust or divorce.' You don't get any of that.

Contestants are more media savvy than they were in Groucho Marx's day, and more likely to play to the camera. How does that affect the show?

When you do a show in L.A., the cheapest, most efficient way to do it is to get people within 10 miles of the studio, (and) if they're not in show business they have some connection to it. For the last year we sent out feelers to Florida, Louisiana, all over, and we fly people in. We choose the ones that seem like characters. And you really see when they come here, they're like, 'It's my first time in L.A. and oh my God.' There's an excitement and a nervousness you don't get from the people who bump into Brad Pitt every day at the deli.

You were a kid when 'You Bet Your Life' aired. Was watching Marx inspirational for you as a comedian?

He was always my favorite Marx brother because I never was a 'put on a funny hat, throw a pie' kind of comedian. I always liked people with verbal skills: Bob Newhart, Johnny Carson. I liked people who appeared normal but said funny things, as opposed to putting on costumes. I enjoyed the Marx Brothers movies, but I liked Groucho because he was the wise guy.

Do you miss hosting a late-night show and the forum it gave you for comedy?

It was great fun. I enjoyed doing the monologue, that's my favorite part. And I enjoy everybody that's on there now. I watch the monologues, and I don't watch interviews too much, because I talked to that guy (the celebrity). But I really (appreciate) how hard it is to do a different version of the same joke every night. Because let's be honest, the news doesn't change a whole lot from day to day. It changes from week to week. And then you have to watch all the other shows, make sure you don't have the same joke as Conan or Samantha Bee or whoever it might be.

You said that comedy doesn't change, but the targets do. When you look back at jokes that drew criticism, do you say 'those were the times' or do you wince?

When people were in the news, you did jokes about the news. I can give you a good example. When Amy Winehouse, who was on 'The Tonight Show,' was singing that song about 'I won't go to rehab,' there were a lot of jokes about that. Then she died and then people were, 'Jay Leno did a joke.' But I did it with her blessing, she was there (on 'Tonight') when I did it. But, you know, you only live in the time you live in.