ARKANSAS SIGHTSEEING: Museum of Automobiles puts cars from decades past on display 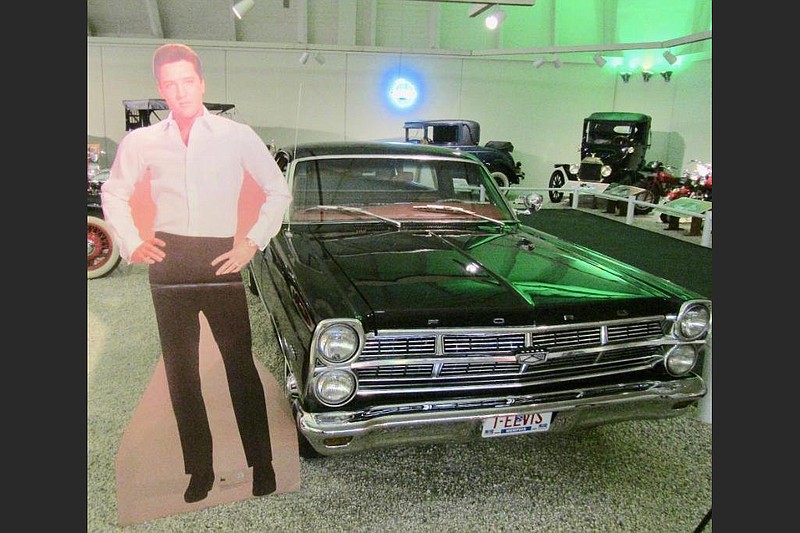 A silhouette of Elvis Presley stands near his 1967 Ford Fairlane Ranchero. (Special to the Democrat-Gazette/Jack Schnedler)

A poster inside the Museum of Automobiles atop Petit Jean Mountain lists some 2,600 models of motor vehicles that have been sold in the United States since the start of the 20th century. That sheer quantity testifies to America's long and devoted romance with the cars we drive.

The museum displays dozens of antique and newer makes, evoking the sentiments of an old Saturday Evening Post article:

"The love affair between Americans and their cars has lasted for more than a century. Like most affairs of the heart, those years have produced triumph, tragedy, creativity, innovation, and a not insignificant dose of laughter and lunacy."

The grounds of the museum, along Arkansas 154 east of the Petit Jean State Park facilities, will be thronged Thursday-Saturday for the 24th annual Petit Jean Fall Swap Meet. The gathering also includes a Military Vehicle Rally on Friday-Saturday and an Open Car Show on Saturday. The public is welcome to visit the outdoor events at no charge. 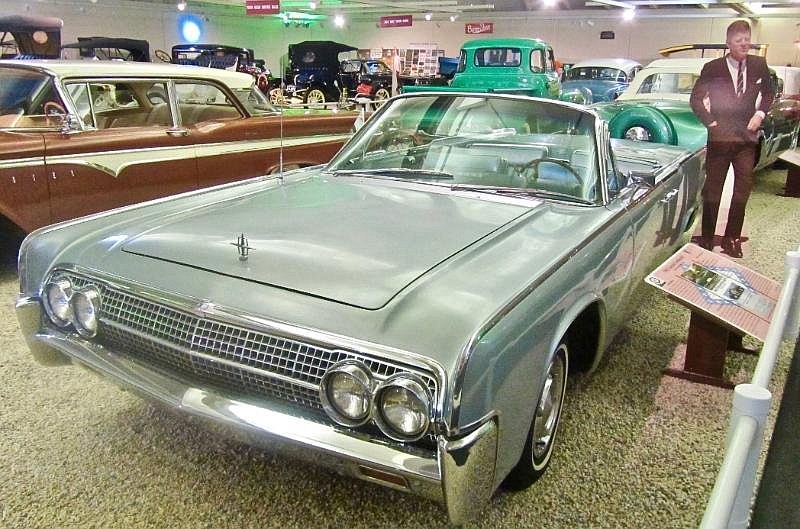 One of the rarest vehicles inside the museum, founded in 1964 by Winthrop Rockefeller, was built by the only company ever to manufacture automobiles in Arkansas.

Made by Little Rock's Climber Motor Co., the sleek 1923 Phaeton Model 6-50 is on loan to the museum from a private owner, as are some other exhibits. One of two Climbers known to exist, it was among the fewer than 300 cars produced from 1919-1923 by the fledgling company before it went broke.

The Climbers evidently were rugged vehicles. One was driven up the steps of the state Capitol in Little Rock in a stunt "to prove its stamina and climbing ability." According to the museum, it "would climb like a tractor, yet run well on the highway." 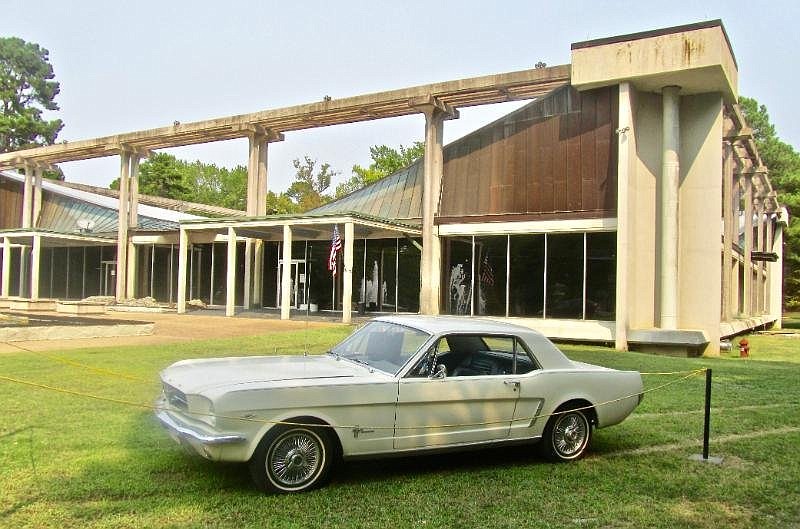 The Museum of Automobiles hosts its Fall Swap Meet on Thursday-Saturday. (Special to the Democrat-Gazette/Jack Schnedler)

Two of the collection's cars are Cadillacs that were owned by Rockefeller, Arkansas' first Republican governor since 19th-century Reconstruction. Other four-wheeled luminaries include autos driven by John F. Kennedy and Elvis Presley. They are paired with life-size silhouettes of the 35th U.S. president and the king of rock 'n' roll.

Kennedy drove the 1963 Lincoln Continental convertible as his private car when vacationing at the Summer White House in Hyannis Port, Mass., in 1962 and 1963. Presley bought his 1967 Ford Ranchero to drive on a property he'd bought near his birthplace of Tupelo, Miss.

Among the museum's oldest vehicles is a two-passenger 1904 Oldsmobile Touring Runabout. Its engine sat under one of the bucket seats. An advertisement declared: "For business or pleasure, in rain or shine, the Runabout has no equal. It is always ready. It represents the latest and best in automobile construction in the world." 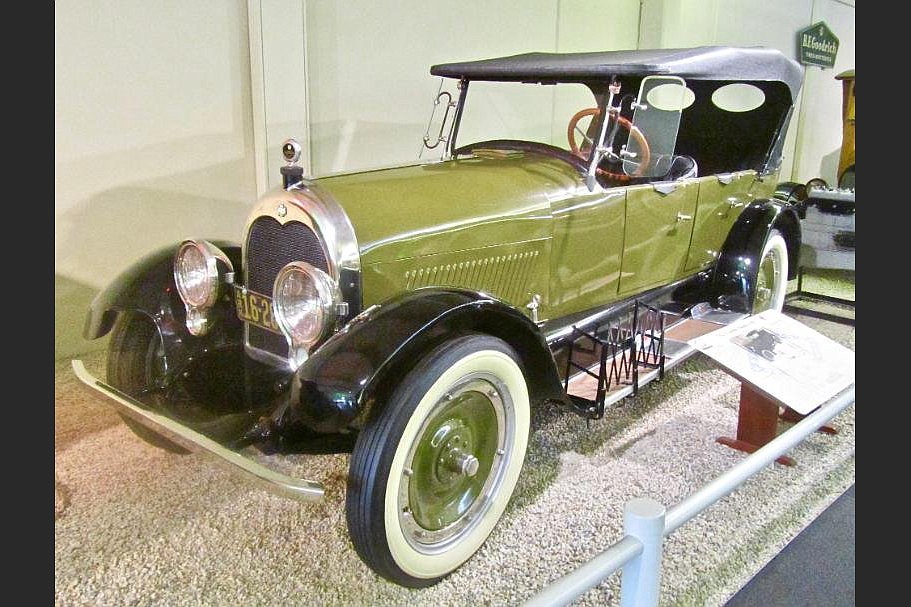 A rare Arkansas-made Climber is a gem at the Museum of Automobiles. (Special to the Democrat-Gazette/Jack Schnedler)

Among the most iconic models is a 1952 Volkswagen Beetle, a pioneer of the foreign-auto invasion. That year, "there was only one distributor for Volkswagens in the United States, in New York City. Of the 114,348 Volkswagens built in 1952, only 601 were sold in the USA."

Then, according to the VW marker, Beetle Mania hit America: "No single car model, with the exception of Ford's Model T, played such a major role in changing automotive history. More than any other make, the German-built Volkswagen paved the way for the import invasion of the 1950s and '60s, which in turn affected the types of cars turned out by Detroit for years."

Someday, a Tesla or some other pioneering electric vehicle may join the Model T and the Beetle in the Automobile Museum's pantheon. For now, visitors can enjoy a bit of whimsy along with the vintage horsepower. 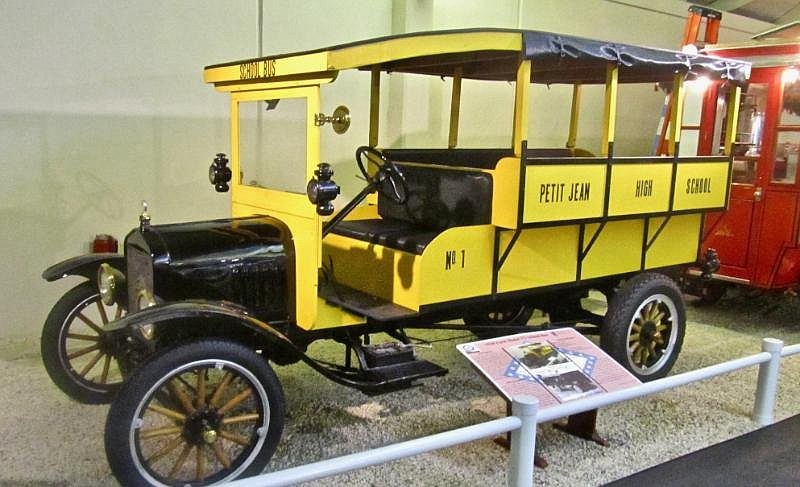 Inspiration for chuckles comes from the overhead posting of two Burma-Shave sign sequences like those that deployed doggerel for roadside amusement from the 1920s to the 1960s.

One is a lighthearted pitch for the company's shaving cream: "Within this vale of toil and sin, Your head grows bald but not your chin."

The other is cautionary: "Hardly a driver is still alive, Who passed on a curve at 65."

The Museum of Automobiles

Print Headline: Museum of Automobiles: The way we whirred