Biden at U.N. calls for global epoch of unity

He notes need to address virus, climate, other issues by Compiled Democrat-Gazette Staff From Wire Reports | September 22, 2021 at 6:53 a.m. 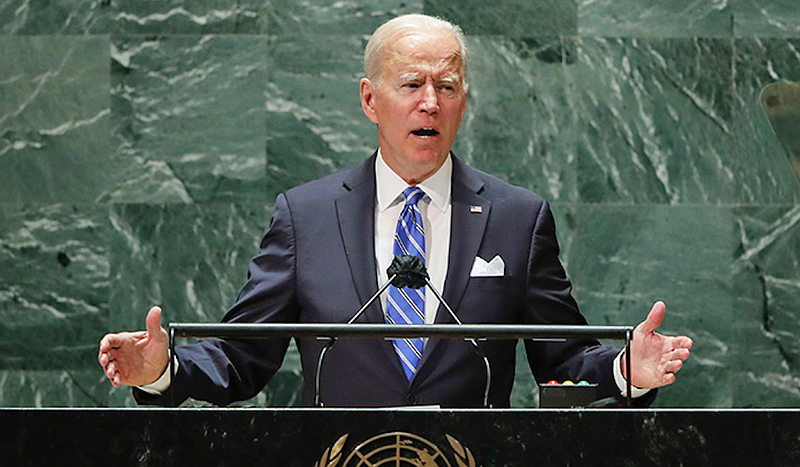 President Joe Biden delivered his debut address to the annual gathering of world leaders at the United Nations on Tuesday amid strong new doubts about his ability to vault the United States back into a position of global leadership after his predecessor's promotion of "America first" isolationism.

Speaking to a smaller-than-usual audience of his peers because of the still-raging covid-19 pandemic, Biden called for a new era of global unity against the coronavirus, climate change, emerging technological threats and the expanding influence of autocratic nations such as China and Russia.

"We will choose to build a better future. We, you and I, we have the will and capacity to make it better. Ladies and gentlemen, we cannot afford to waste any more time," he said. "We can do this."

And he said, "No matter how challenging or how complex the problems we're going to face, government by and for the people is still the best way to deliver for all of our people," insisting that the United States and its Western allies would remain vital partners.

"Our security, our prosperity and our very freedoms are interconnected, in my view as never before," Biden said.

Calling for the world to make the use of force "our tool of last resort, not our first," he defended his decision to end the U.S. war in Afghanistan, a chaotic withdrawal of U.S. troops that left allies blindsided.

"Today, many of our greatest concerns cannot be solved or even addressed by the force of arms," he said. "Bombs and bullets cannot defend against covid-19 or its future variants."

The president said, "We're opening a new era of ... using the power of our development aid to invest in new ways of lifting people up around the world."

His familiar refrain that the world must choose between democracy and autocracy looks different now that the Taliban are again in control of Kabul, reversing many of the democratic gains of the past 20 years. Covid is resurging in much of the world. And the French just recalled their ambassador in outrage -- not just over losing a $66 billion-plus submarine contract but also because it was made clear that they are not in the inner circle of allies.

Biden and other leaders are gathering against a backdrop of disastrous climate change, polarized superpower relations and a pandemic that has worsened the global rich-poor divide.

The event is a major test of credibility for Biden, who was among the first to address the 193-member General Assembly. The last to speak in the morning session was President Xi Jinping of China, via prerecorded video, bookending the competing views of the two most powerful countries in the world.

Xi also appeared to take a swipe at the United States over the collapse of its effort to build a democracy in Afghanistan.

"Recent developments in the global situation show once again that military intervention from the outside and so-called democratic transformation entail nothing but harm," Xi said.

Rich nations for many years have promised to spend $100 billion a year on climate help, but a new study shows they're short by $20 billion a year. Biden said his new commitment would help rich nations reach their goal.

And there's a dramatic rich-poor gap on the issue. Developing nations and others are reluctant to further curb emissions of heat-trapping gases without help from developed nations, which -- in the words of British Prime Minister Boris Johnson -- are "the guys that created the problem."

"It's fantastic to see the United States really stepping up," he said.

U.N. Secretary-General Antonio Guterres, who has openly fretted about the bitter rivalry between China and the United States, said he was encouraged by "the leaders of the world's two largest economies regarding their commitment to climate action."

Still, a dominant theme of Biden's speech was what he described as the choice faced by the world between the democratic values espoused by the West and the disregard for them by China and other authoritarian governments.

"The future belongs to those who give their people the ability to breathe free, not those who seek to suffocate their people with an iron-hand authoritarianism," he said. "The authoritarians of the world, they seek to proclaim the end of the age of democracy, but they're wrong."

[Video not showing up above? Click here to watch » https://www.youtube.com/watch?v=6NAaR91ku7Q]

But the president vowed not to pursue a new era of sustained conflict with countries like China, saying the United States would "compete vigorously and lead with our values and our strength to stand up for our allies and our friends."

"We're not seeking -- say it again, we are not seeking -- a new Cold War, or a world divided into rigid blocs," he said. Notably, Biden didn't utter the word "China" in his 34-minute address.

The president argued that overcoming a daunting list of crises "will hinge on our ability to recognize our common humanity."

Climate change and the pandemic are expected to dominate the week, and Biden planned to host a covid summit on the sidelines to push other countries to increase capacity to manufacture vaccines for poor countries.

"This year has also brought widespread death and devastation from the borderless climate crisis," Biden said. "Extreme weather events that we've seen in every part of the world -- and you all know it and feel it -- represent what the secretary-general has rightly called code red for humanity."

Biden also urged leaders to move more quickly to rein in the pandemic that has killed millions.

"We need a collective act of science and political will," he said. "We need to act now to get shots in arms as fast as possible, and expand access to oxygen, tests, treatments, to save lives around the world."

Biden drew applause when he closed with a note that his speech was the first by a U.S. president in 20 years "with the United States not at war."

"We've turned the page. All the unmatched strength, energy and commitment, will and resources of our nation are now fully and squarely focused on what's ahead of us, not what was behind," Biden said.

"I know this -- as we look ahead, we will lead -- we will lead on all of the greatest challenges of our time, from covid to climate, peace and security, human dignity and human rights, but we will not go it alone."

Some other reception for Biden's address was muted.