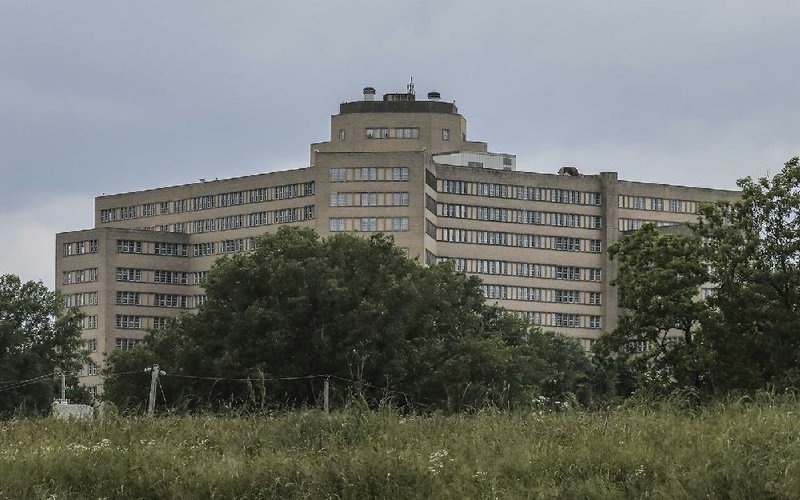 Ten Arkansas properties have been added to the National Register of Historic Places, according to the Arkansas Historic Preservation Program.

The newly listed properties include the old Veterans Administration Hospital in Little Rock, the student union from the time of Arkansas A&M College in Monticello and an interstate overpass in Conway County.

The old VA Hospital at 300 E. Roosevelt Road is a 10-story, concrete structure that was constructed from 1948 to 1950 to help accommodate the needs of veterans returning from World War II.

The hospital was designed in the International Style by two Little Rock architectural firms -- Brueggeman, Swaim & Allen and Erhart, Eichenbaum & Rauch, according to the National Register nomination form.

"The main building's footprint is best described as a Y-shape, which was done to take advantage of the high site and to allow the majority of rooms to benefit from eastern and southern exposure, and the exterior walls are a buff brick with Alabama buff limestone trim," according to the nomination.

A new Veterans Administration hospital -- the John L. McClellan Memorial Hospital -- opened in 1984 at 4300 West Seventh Street, closer to the University of Arkansas Medical Sciences campus to allow the sharing of equipment and facilities, according to the nomination.

In 1995, the property was acquired by Pulaski County.

"It was then purchased by Hobby Lobby Creative Centers, a Christian craft retailer, in 1998," according to the nomination. "They, in turn, gave the property to the Institute for Basic Life Principles, a controversial religious organization, to use as a training center for its Bible-based courses, in 1999."

Basic Life Principles made several changes to the interior of the building.

"The first, second and third floors of the building were partially gutted and reorganized to accommodate the organization and their offices," according to the nomination.

In 2002, the Little Rock Police Department Downtown Patrol and Special Operations moved into a wing of the second floor of the building.

Last year, the property was purchased by Princeton Place Apartments LLC, who later sold it this year to VA Hospital Property LLC.

"There are future plans to renovate the building into multi-family housing with potential other uses as well, at which time the religious organization will leave the building," according to the nomination.

The student union at what was then Arkansas Agricultural and Mechanical College in Monticello also made the National Register list.

Commissioned in 1951 and completed in 1954, it's known today as the Visual/Performing Arts Building at the University of Arkansas at Monticello.

The building is located about 3 miles southwest of downtown Monticello, just west of the intersection of Weevil Drive and Scogin Drive, in the heart of the modern campus of UA-Monticello.

The building is a large structure with a mixture of single-story and two-story sections. Designed by Little Rock architect Bruce R. Anderson, it's the earliest example of the International Style of architecture in the Drew County area, according to the nomination form.

"As such, the building has simple, geometric massing, flat roofs, large overhangs, and features large ribbons of windows across its facades," according to the nomination. "The exterior of the building is covered in ashlar stone veneer and cast concrete."

"It came about due to the efforts of the Arkansas Farmers' Educational and Cooperative Union, who wanted to establish a series of agricultural high schools across the state," according to the nomination. "Their work turned into the Arkansas State Legislature Act 100 in 1909. This legislation divided the state into four districts and established an agricultural high school in each, with schools to be erected in Jonesboro, Russellville, Magnolia and Monticello. These schools offered classes for grades 6th through 12th and focused on the agricultural arts. ...

"In 1923, the four State Agricultural schools, including the one at Monticello, stopped offering courses for the sixth through eighth grades and began offering lower-level college courses. That was followed by the names of the schools being changed by the Arkansas Legislature in 1925. The Jonesboro, Magnolia, and Monticello schools became Agricultural and Mechanical colleges, while the Russellville school became the Arkansas Polytechnic College."

One of the more unique properties on the new National Register list is an overpass over Interstate 40 on Fish Lake Road at Blackwell in Conway County.

The overpass, built in 1967 by the H. N. Rodgers & Sons Company of Memphis, is an "inverted delta steel-beam bridge with a reinforced-concrete deck," according to the nomination.

Five sets of steel beams -- each forming an "inverted delta," or V-shape -- can be seen in the interstate median supporting the overpass.

"When it was built in 1967, the use of the inverted delta steel beam design for the bridge's steel structure was a new bridge design for an Arkansas highway, and it was unlike any of the other interstate bridges that had been built up to that time," according to the nomination. "In fact, the design of the bridge caused it to be selected by the American Institute of Steel Construction in 1968 as the most beautiful structure in its category -- highway grade separation -- to be opened to traffic in 1967. The use of the inverted delta steel beam design rather than a cast-concrete pier, gave the bridge a lightness and elegance in design that was lacking from most interstate highway bridge designs of the 1960s. The bridge design, with slight modifications, would be used again for the I-40 Overpass on Arkansas Highway 219 in Ozark."

Other Arkansas properties added recently to the National Register include: