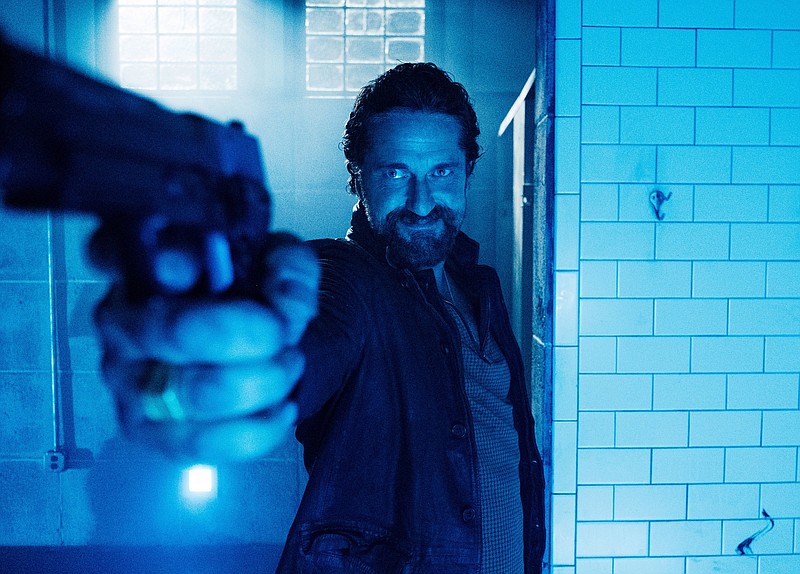 A gleeful hit man named Bob Viddick (Gerard Butler) gets himself tossed in jail to advance the plot of the shoot-’em-up “Copshop.”

Second Take is an occasional series that looks at movies currently playing in theaters.

From the trailer to the movie poster, "Copshop" lets viewers know to expect a vintage grindhouse-style film with plenty of violence and a basic premise, like something that crawled out of a second-run theater in the '70s.

And yet, "Copshop," also tries to bring a unique style with a retro blaring soundtrack and some creative cinematography. It's full of cheesy dialogue like "He was just one day ahead of the Devil." It's the kind of stuff one might expect to see and hear in a Robert Rodriguez film.

The story follows Teddy Murretto (Frank Grillo), a con artist who decides to get himself thrown in jail so he'll theoretically be protected from the dangerous people chasing him. How does he accomplish this? By punching a cop named Valerie Young (Alexis Louder) in the face.

It doesn't take long for an assassin named Bob Viddick (Gerard Butler) to find Teddy and get himself arrested so he'll wind up in the same jail. Bob accomplishes this by pretending to be a drunken driver. He soon ends up in the drunk tank opposite of Teddy and staring him down.

This is the film's primary trio, and while that would be enough to fill a standard exploitation film, "Copshop" also adds in a side story about a dirty cop trying to smuggle drugs out to an unspecified party. It's fairly superfluous.

Teddy paints himself as an unreliable narrator through his actions but tries to come across as somewhat sympathetic to win over Val. Bob, meanwhile, taking a page from Karl Urban's Billy Butcher character in "The Boys," plays his role straight. He's a professional killer, he's there to end Teddy, and that's all he's after.

The violence "Copshop" offers up is pretty standard exploitation film material, like what you'd see in "Hobo With a Shotgun" or "Machete." Yet, there's also a dash of style with the occasional flashback or cool camera pan that seems inspired by Stanley Kubrick or Quentin Tarantino. Director Joe Carnahan certainly knew where he wanted to draw influence from and committed to it. And the first two-thirds of the film really benefit from Carnahan's inspirations.

The other benefit that comes from Carnahan's borrowing of style is "Copshop" doesn't seem as low budget as other exploitation movies that came before it.

Gun enthusiasts might be a little annoyed with the extremely poor firearm behavior "Copshop" displays. To break up a bizarre wedding fight at a casino (that the movie doesn't even attempt to explain), Val fires her gun in the air twice. Anyone that's gone through a gun safety lesson will know that's dangerous because bullets have to come down somewhere. And when they do, they might hurt or kill someone.

Val later gets into a mock quick-draw contest with a fellow officer and points her firearm at him. Even though some might argue it was clearly unloaded, a typical gun safety course will also teach people never to point a gun at any target unless they intend to fire at it.

Of course "Copshop" isn't the first action movie to make these mistakes, and it'll likely not be the last.

The story heats up when a second assassin named Anthony Lamb (Toby Huss) shows up disguised as a balloon delivery man. It's something so ludicrous it would only fit in an exploitation film. And Huss delivers many laughs throughout the movie. He has lines like, "It just got weird. It's gonna get weirder," and "You look like Tom Cruise in that samurai movie nobody ever saw."

As cops around the station start to die (each death more bloody than the last), Teddy "comes clean" to Val about who he is and where he comes from. But he's already established to the audience that he's an unreliable narrator. In the opposite cell, professional killer Bob is warning Val not to trust Teddy one bit.

Some scenes in "Copshop" deliver great tension, and the movie really attempts to underpromise and overdeliver. There's a cheap shot at trangender people that comes out of nowhere and does nothing for character development or the plot. It's not humorous in the least.

The main cast turns in strong performances, with Louder just as good as Butler. But it's a shame to see "Copshop" blow its lead. It needs about 15-20 minutes shaved off.