The nation in brief: Slain woman's boyfriend accused of theft 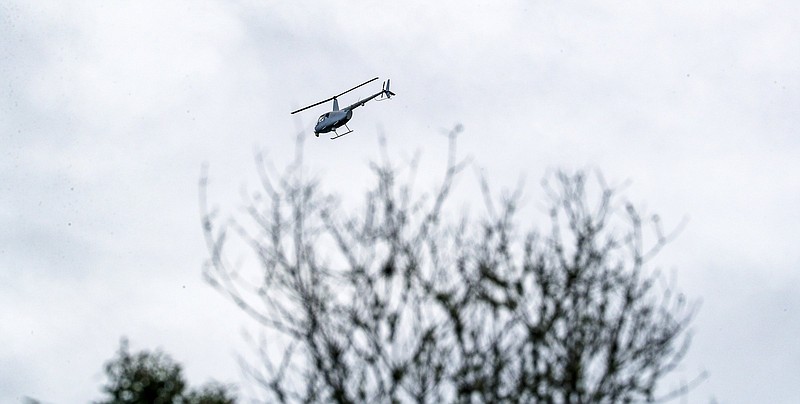 A helicopter aids crews from the FBI and North Port police and sheriff’s departments Wednesday as they search for Brian Laundrie at Carlton Reserve Park in Venice, Fla. (AP/Naples Daily News/Andrea Melendez)

BILLINGS, Mont. -- Federal officials said the boyfriend of Gabby Petito, whose body was found at a national park in Wyoming after a cross-country trip with him, has been indicted on a charge of unauthorized use of a debit card as searchers continued looking for him in Florida swampland.

The federal grand jury indictment filed in U.S. District Court in Wyoming does not explain to whom the card belonged. But it indicates Brian Laundrie made unauthorized withdrawals worth more than $1,000 during the period in which Petito was missing.

FBI agent Michael Schneider said an arrest warrant issued for Laundrie will allow authorities to pursue him, while the investigation continues into Petito's death.

How Petito was killed has not been revealed pending the final results of an autopsy by the Teton County, Wyo., coroner.

In Florida, the search for Laundrie continued Thursday for a fifth day in the Carlton Reserve wilderness park near his parents' home. Laundrie told his parents he was going there several days after he returned alone Sept. 1 from his trip out west with Petito.

Hochul thanked Zucker for his service and said he has agreed to stay on until the state names a new commissioner. Cuomo resigned in the wake of a damning attorney general report that found Cuomo sexually harassed at least 11 women.

Zucker, appointed by Cuomo as health commissioner in 2015, was a leading figure in the state's pandemic response last year as the New York City metro area became one of the world's worst covid-19 hot spots.

Cuomo often praised Zucker for his leadership, and the two appeared together regularly at the Democrat's widely watched televised briefings. Under Zucker, the Department of Health worked with hospitals statewide to ensure a surge of covid-19 patients wouldn't catastrophically overwhelm hospital systems.

But Zucker has faced heated criticism over the state's response, particularly in nursing homes. Nearly 16,000 people living in nursing homes and other long-term care homes in New York have died of covid-19, according to state data. He also faced criticism from health care workers who said the state failed to ensure hospitals and nursing home personnel had adequate personal protective gear and staffing.

Zucker defended his department's record in his resignation letter: he said health officials faced "countless unfounded criticisms" but acted with "conscientiousness and competence."

FORT CAMPBELL, Ky. -- Officials are investigating the death of a Fort Campbell soldier during a diver-training exercise, the Army said.

The soldier died Tuesday during the exercise at Joe Swing Park Reservoir on the sprawling Army post along the Kentucky-Tennessee line, Fort Campbell said in a statement. The soldier went into the water while training and didn't resurface.

A search began immediately with crews from several agencies including Fort Campbell Fire and Emergency Services and the Tennessee Wildlife Resources Agency, officials said. A body was recovered Wednesday.

Activities at Joe Swing Park Reservoir have been canceled and the area is off-limits until further notice, Fort Campbell said.

No further information will be released until the soldier's family is notified, authorities said.

Deaths rise for evacuees at warehouse

NEW ORLEANS -- The death toll has risen from seven to 15 among nursing home residents evacuated before Hurricane Ida to a warehouse where conditions were found too squalid for safety, the state health department said Thursday.

However, a department statement noted that some deaths may be unrelated to the storm or conditions in the warehouse.

The number that coroners have classified as storm-related remains at five, Department of Health spokesman Kevin Litten said in an email. He said coroners are investigating others.

The health department has said that 843 people were taken to the warehouse in the town of Independence, and more than 50 had to be hospitalized afterward. Authorities said the warehouse stank of urine and feces, with some people lying in dirty clothes, without food, on mattresses on the floor. Trash was piled on the floor, there was water in the building and generators at least temporarily failed, state officials said.

John McLindon, attorney for Bob Dean, who owns seven nursing homes evacuated to the warehouse, said he is confident that Dean will be cleared.

"There's no evidence that the evacuation caused or contributed to any of these deaths," he said.

The state attorney general has begun a criminal investigation, and state health officials are investigating the deaths.