Filmland kicks off next week with Chastain, Nichols 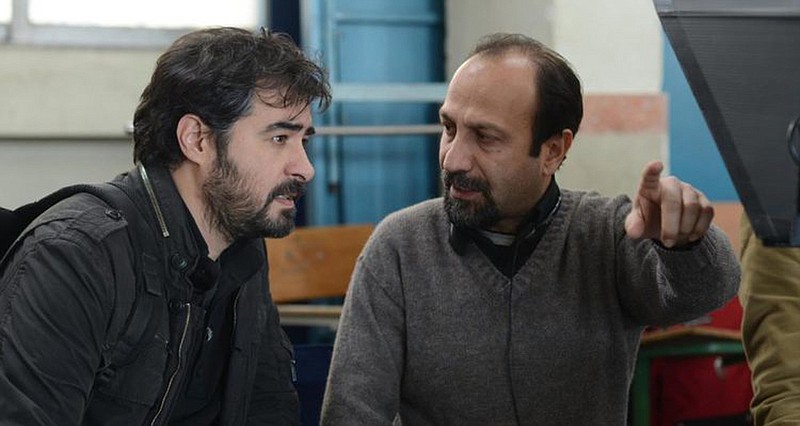 Iranian master filmmaker Asghar Farhadi (right) is seen here talking to actor Shahab Hosseini on the set of his 2018 film “The Salesman.” Farhadi’s latest film, “A Hero,” will be featured at the Arkansas Cinema Society’s Filmland event next week.

In addition to seeing Jessica Chastain's new movie "The Eyes of Tammy Faye," next Saturday night, movie lovers can meet the Oscar-nominated actress ("Zero Dark Thirty," "The Help") as she takes part in a Q&A with Arkansas-raised writer-director Jeff Nichols ("Mud," "Loving") at MacArthur Park at 1200 McMath Ave. in Little Rock. The event is part of this year's Filmland in the Park from Thursday through Sunday, Oct. 3. Tickets are available through arkansascinemasociety.org.

The event is a collaboration between the Arkansas Museum of Fine Arts and the Arkansas Cinema Society. Previous filmland events have brought performers and filmmakers including Adam Driver to Little Rock. In a statement, Nichols, who co-founded ACS, recalls, "I've known Jessica since we worked together in 'Take Shelter.' It was exciting to be on that set and watch the immense talent she'd bring every day, and it's been equally exciting to watch how her career has evolved and exploded over the last decade. I truly consider her one of the best actors working today."

The Eyes Have It

In "The Eyes of Tammy Faye," Chastain makes viewers look at the late televangelist Tammy Faye Bakker's life from a fresh perspective. During the late '80s, Bakker seemed like divine blessing for comics like Jan Hooks from "Saturday Night Live," who mocked her garish makeup and tendency to gush mascara-stained tears that seemed to pour forth like eruptions from Old Faithful.

In the new film, Chastain and director Michael Showalter ("The Big Sick") reveal that the heavy cosmetics couldn't hide genuine compassion that she frequently expressed for LGBT people, especially when the AIDS crisis was at its height in the 1980s. Now she is known for her inclusive faith as well as her time at Jim Bakker's side during his ill-fated PTL ministries.

Chastain manages to summon just enough dignity to render Bakker's musical and puppet ministries as something more than simple comedy fodder. Tickets are $40, and the show starts at 7:15 p.m.

Liz Garbus has made engrossing documentaries that have examined the lives of tormented chess champion Bobby Fischer and musician Nina Simone. Her latest examines the legacy of aqualung developer and marine explorer Jacques-Yves Cousteau. Through several voyages and constant appearances on TV, Cousteau tirelessly championed preserving the oceans decades before others followed suit. "Becoming Cousteau" debuted at this year's Toronto International Film Festival and was produced by Oscar-winner Evan Hayes ("Free Solo"), who is a member of the ACS board. The film plays at 7:15 p.m. Thursday. Tickets are $30. Hayes has made a short presentation that will be shown as part of the event.

Iranian director Asghar Farhadi's films have won two Oscars -- one for "A Separation" and another for "The Salesman" -- but his ability to tell involving stories has occasionally upset authorities back in Tehran, and he was not allowed to receive his second Academy Award because visitors from his country were banned the year his "The Salesman" won.

"A Hero" follows Rahim, who is in prison for a debt he can't pay. He hopes that a short leave will help him end or alleviate his obligations, but he might not be that lucky. Farhadi's movie is fresh from this year's festival at Cannes, and he's got a gift for making stories that are as engrossing as they are bleak. Nichols is scheduled to hold a Q&A with his Iranian peer.

Graham Gordy, who wrote the third season for "True Detective," offers a course on how to create scenes and eventual screenplays. He'll be offering advice for adults and schoolkids who want to make films and TV shows of their own.

There's also a talk from casting director Yancey Prosser from The Agency, Inc. and a guide on making industry pitches from Emmy-wining producer Mario Troncoso, who's currently based in Springdale.

The event also includes food trucks and a digital presentation of locally made short films. Attendees must wear masks and present proof of vaccination or a negative covid test that's not more than 48 hours old. ACS members receive a discount on admissions.

Print Headline: Filmland kicks off next week with Chastain, Nichols