Pittman and 4-star CB talk about Hogs and Aggies 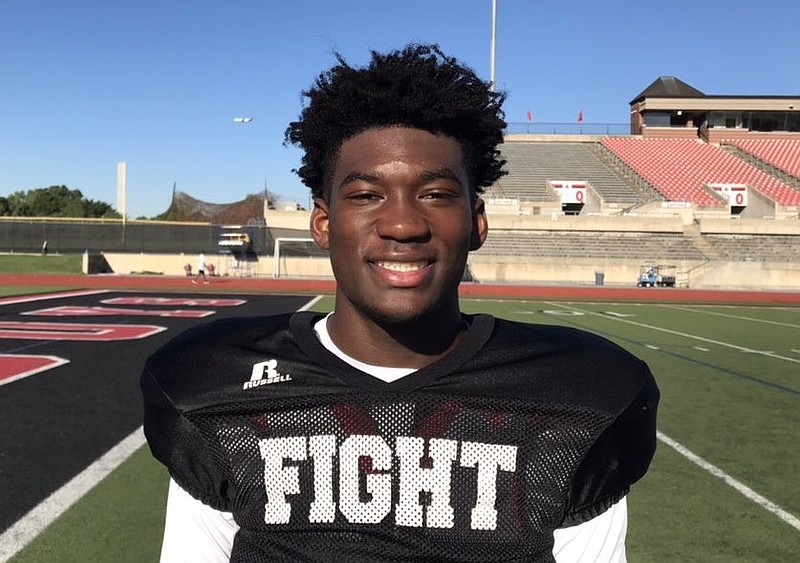 Arkansas coach Sam Pittman made sure to let ESPN 4-star cornerback Braxton Myers know he needs to get to Arlington, Texas to watch the Hogs take on Texas A&M on Saturday.

“I FaceTimed coach Pittman yesterday about the game and he was telling me like the success and NIL stuff,” said Myers Thursday morning of his plans to attend Arkansas' game.

Myers, 6-1, 185 pounds, of Coppell, Texas, has more than 20 scholarship offers from schools like Arkansas, Texas, Baylor, Michigan, Oklahoma, LSU, Washington, Ole Miss and others. He said he talks to cornerbacks coach Sam Carter on a daily basis.

“He sends bible verses every single morning and I appreciate that,” Myers said. “It’s not all about football. It’s more than just football at the end of the day.

“It’s good to have a relationship with your coaches outside of football too because they’re going to help you become better man.”

Myers recorded 32 tackles, 13 pass breakups, 5 interceptions and recovered a fumble as a sophomore at John Paul II High School in Plano. He also played on varsity as a freshman.

He has 12 tackles, an interception, a pass breakup and a forced fumble in three games this season. Myers liked how the Hogs defense played in the 40-21 victory over Texas.

“Everybody being dogs on the field, flying to the ball making plays on defense and just being aggressive,” Myers said. “I was very surprised by the defense. They came out very strong. Stopping them on the goal line. They were very intense the whole game and they set the tone.”

He likes himself and his teammates to play with an aggressive attitude on defense.

“I feel like you have that mentality to go out there and dominate anybody,” said Myers, who has a 76 inch wingspan. “Like you can do it and if you come out scare and flat then, you’re going to get scored on. Just get the mindset to just dominate.”

“He’s very physical,” DeWitt said. “He plays corner with the physicality and I think kids feed off of that and I think that’s what is going make him a really good player down the line is the ability to be physical and tackle really well along with his cover skills.”

Myers oozes confidence which carries over to his teammates.

“He’s a confident kid so I also think that helps encourage your team,” DeWitt said. “They know you have a really good player on the field. He brings a level of confidence to the defense.”

HIs father, Michael Myers, was a defensive lineman at Alabama and a fourth-round draft pick of the Dallas Cowboys in 1998. Like most players today. Myers likes to get hyped by listening to music before each game.

“Little Baby all the way,” he said. “That’s my favorite Rapper. Like it Speed up, Never Recover, Emotionally Scarred.”