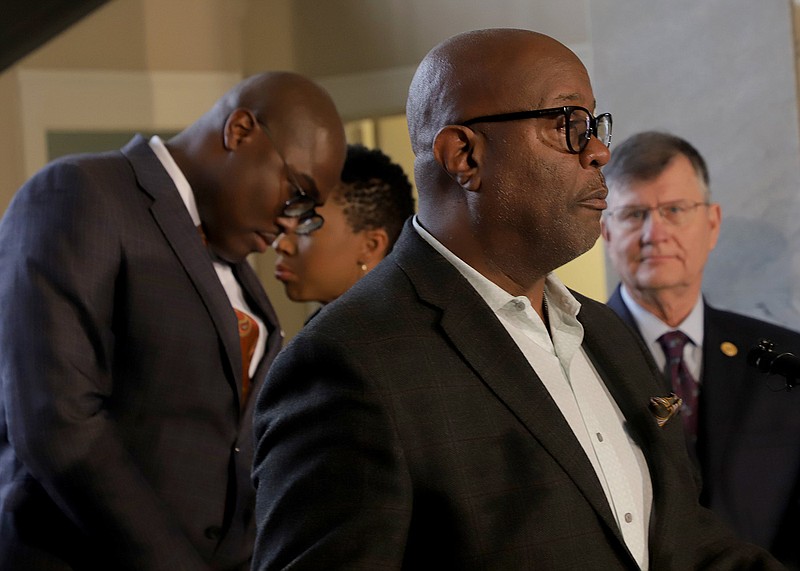 After Carpenter was alerted to the fact that Humphrey's attorney Michael Laux was preparing to amend the complaint to add Little Rock, the city attorney wrote to the mayor.

"If the chief sues the City over the operation of the police department, which is what Mr. Laux's amendment would effectively do, why is he chief?" Carpenter wrote on the night of Aug. 19, according to records obtained through an Arkansas Freedom of Information Act request.

Carpenter referred to Laux's signal that the city would be added the following week.

"Does the client understand the ramifications of his lawyer's actions?" Carpenter wrote. "More to the point, do you feel comfortable supervising or taking policy advice from a Department head who believes his employer -- for which you are the chief executive officer -- is acting illegally and damaging him?"

He added, "Discussion of the issue soon is critical."

Humphrey's suit, originally filed in September 2020 in U.S. District Court for the Eastern District of Arkansas, claimed a wide-ranging collective -- including two of his assistant chiefs and officials from a local police union -- took part in efforts to force him out.

The complaint followed retaliation claims made in court by a series of Humphrey's departmental colleagues last year.

In the wake of the judge's ruling, Laux noted that the complaint could be refiled because Moody had dismissed it without prejudice.

"The elephant not in the room is the city of Little Rock," Laux told the Arkansas Democrat-Gazette last week. "The reason is not the lack of a meritorious claim against the city a year ago or at this very moment. Rather it was the chief's loyalty to the city."

Carpenter received word of Laux's forthcoming attempt to add the city because of an Aug. 19 email from attorney Robert Newcomb.

Newcomb is a local attorney who frequently represents police officers. He currently represents several current and former Little Rock officers, including former officer Charles Starks, in litigation against the city and police chief.

Newcomb forwarded Carpenter and other attorneys a message that Laux sent to federal court officials, plus other attorneys, informing them that the plaintiff -- Humphrey -- would name Little Rock as an additional party to the complaint within the next week or so.

In his email, Newcomb suggested that in the event Humphrey followed through it would be "morally wrong" for Little Rock to fund Humphrey's legal defense in a separate case where Starks, represented by Newcomb, has sued the police chief.

He noted that Humphrey has been sued in his individual capacity by several plaintiffs. Newcomb also asked why the city should pay for Humphrey's personal defense and not pay the bills of those Humphrey sues.

"The Chief can retaliate against those he [is] suing. How is the City going to prevent retaliation?" Newcomb wrote. "I suggest he be relived [sic] of duty until the litigation."

Carpenter replied, "If the Chief sues the City, I think your point is valid. In this instance, I wonder if the Chief's lawyer is acting in the best interest of his client. Further, if the Chief believes the City has liability for actions in the Department he directs, it creates much more serious issues than attorneys [sic] fees."

The day after his Aug. 19 message, Carpenter addressed Scott and Moore in an email and recommended avoiding discussion of Laux's message with Humphrey, Laux or others, according to records.

The follow-up message also was sent to Alex Betton and Rick Hogan, two other city attorneys.

In it, Carpenter told Scott and Moore that since their telephone call that morning, he had met with Betton and Hogan. He later spoke with Betton, Hogan, Wilkerson and Hayes about the situation, Carpenter wrote.

"This office believes that it would be inappropriate at this time for anyone directly from the City to discuss this recent development with Chief Humphrey, Mr. Laux, or any attorneys hired by AMLDP [the Arkansas Municipal Legal Defense Program] in associated cases," Carpenter wrote.

In a phone interview Thursday, Carpenter said the notion that Humphrey would sue the city did not make sense and caused some angst.

The prospect "created all kinds of problems," Carpenter said, beyond the question of simply getting another lawyer.

He acknowledged a practical reason behind why the city might be added to the suit, citing the fact that cities typically have deeper pockets than individuals.

Asked about his advice to the other officials not to discuss the matter, Carpenter said he believed they did not need to be talking with Humphrey or Laux at that juncture.

He referred to the potential for someone who thinks one of their rights has been violated to get a phone call where the individual could face illegal intimidation or retaliation.

Laux could not be reached for comment Thursday by phone or email.

In response to emailed questions Thursday, mayoral spokeswoman Stephanie Jackson wrote, "Chief Humphrey has not filed a lawsuit, and Mayor Scott will not speculate in the press about action he would or wouldn't take in a hypothetical situation."

When reached by phone Thursday, Newcomb said he did not have reservations about providing Laux's email to Carpenter amid the ongoing legal entanglements involving the chief.

If Humphrey filed suit against Little Rock, "it's gonna be a public record anyways," Newcomb said.

He added that the city would not "get any tactical advantage knowing it's coming," other than maybe asking the question about what their dealings would be with the chief.