Visiting Alcorn State storms back to down UAPB 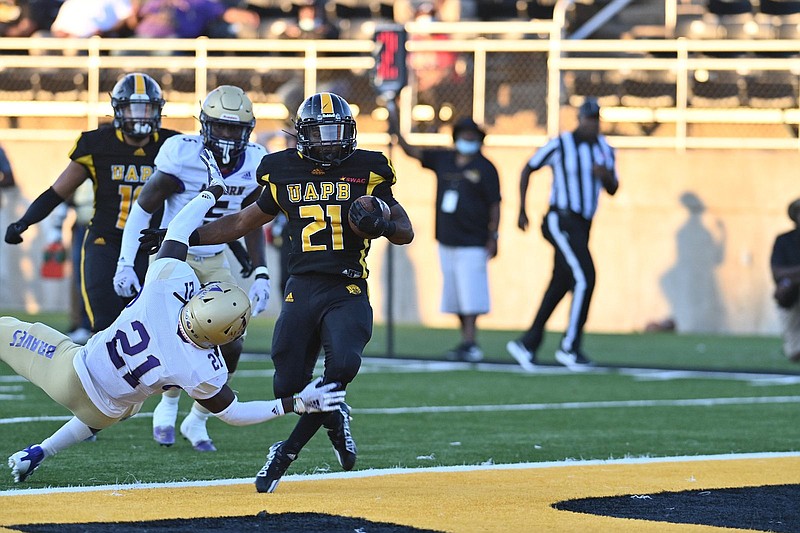 UAPB running back Kierre Crossley (21) runs through a tackle by Alcorn State’s Juwan Taylor on Thursday to score a touchdown during the Golden Lions’ 39-38 loss at Simmons Bank Field in Pine Bluff. (Special to The Commerical/Darlena Roberts)

PINE BLUFF -- More than a week ago, Alcorn State University's game at the University of South Alabama appeared in jeopardy when the Braves had to cut two practices due to a loss of contracted trainers. The Braves still made the trip to Mobile and nearly stunned the Football Bowl Subdivision's Jaguars.

Niko Duffey rushed for two touchdowns, the last one from 2 yards with 3:01 remaining, and Alcorn State overcame a 26-7 halftime deficit to stun the University of Arkansas at Pine Bluff 39-38 before 7,541 at Simmons Bank Field.

The Golden Lions (1-2, 0-1) were hoping to rely on big defensive plays like nose guard Zion Farmer's 32-yard interception return for a touchdown and five sacks against Braves quarterback Felix Harper. But four lost fumbles and missed scoring opportunities came back to haunt the defending SWAC Western Division champions, who saw a five-game winning streak in SWAC regular-season play come to an end.

"Really, it was just a scramble drill," Golden Lions Coach Doc Gamble said, asked how Harper solved the Lions' defense after being held to 53 first-half passing yards. "The quarterback being able to scramble and hit open receivers. That's something we made a point of emphasis on, plastering the receivers, as we call it, staying with the guys and keeping your eye discipline and stuff like that you need to do when you've got a scrambling quarterback like that.

"That wasn't it. That was on me. I take the full blame for that. We've got to do some things better."

Plays like Tyquan Fleming's 13-yard blocked punt return for a score with 5:37 left in the third became more and more precious for the Golden Lions, who extended their lead to 32-13 with the play. But trying to keep Harper contained became more of a challenge for their defense.

LeCharles Pringle helped the Braves (2-2, 1-0) respond with a 60-yard touchdown catch from Harper at the 4:04 mark to wrap up a five-play, 75-yard series. Harper added an 11-yard carry that drew Alcorn State within 32-26 with 23 seconds left in the quarter.

"I knew they were probably going to come out and probably switch some things up," said Farmer of the Braves' offense. "We came out stopping and stalling them in the first half."

UAPB scored at least one defensive touchdown for the fourth straight game, dating back to the May 1 SWAC Championship Game. Farmer made sure of that, picking off a Harper pass and nearly fumbling the ball on what appeared to be an early celebration on his way to the end zone.

That expanded the Golden Lions' lead to 14-0 against a team that won the 2019 SWAC championship but didn't play during the spring 2021 season due to covid-19 related concerns.

University of Central Arkansas transfer Kierre Crossley ran for two touchdowns for the second game in a row. Crossley's 12-yard run opened the scoring on the fifth play from scrimmage after Tyrin Ralph returned the opening kickoff 65 yards to the Alcorn State 31, and his 2-yard TD to start the fourth quarter expanded what was a six-point advantage to a 38-26 lead for the Golden Lions.

UAPB's running game was stifled, however, to 87 yards on 28 carries. Crossley had 44 yards on 13 carries.

"They made it difficult for us, especially running the ball," Crossley said. "It was an adjustment that had to be made with the run game, and as the game went on, we made those adjustments. We just came up a little bit short."

Alcorn State pulled within 38-33 after Harper threw a 69-yard touchdown strike to C.J. Bolar with 9:23 remaining.

After Harper fired a 60-yard scoring strike to LeCharles Pringle in the third quarter, former Dollarway standout Kavareous Lowe returned the kickoff 63 yards to the Braves' 3. UAPB came up empty on the next series, as Daniel Ingram was stopped for a 3-yard loss and Skyler Perry threw three consecutive incompletions.

Zack Piwniczka went 2 for 2 on field goals from 45 and 37 yards out but was injured on a muffed extra-point attempt late in the second quarter, Gamble said. That led the Lions to go for the touchdown rather than take the points, he said.

UAPB went for two-point conversions on their second-half touchdowns and missed twice.

Perry finished the game 24-of-39 passing for 316 yards and a touchdown. Josh Wilkes, who scored on a 35-yard reception, led UAPB receivers with 85 yards on 6 receptions.

CORRECTION: An earlier version of this story misstated the number of games the Golden Lions won in a row. The Golden Lions’ five-game winning streak in SWAC regular-season play came to an end Thursday. 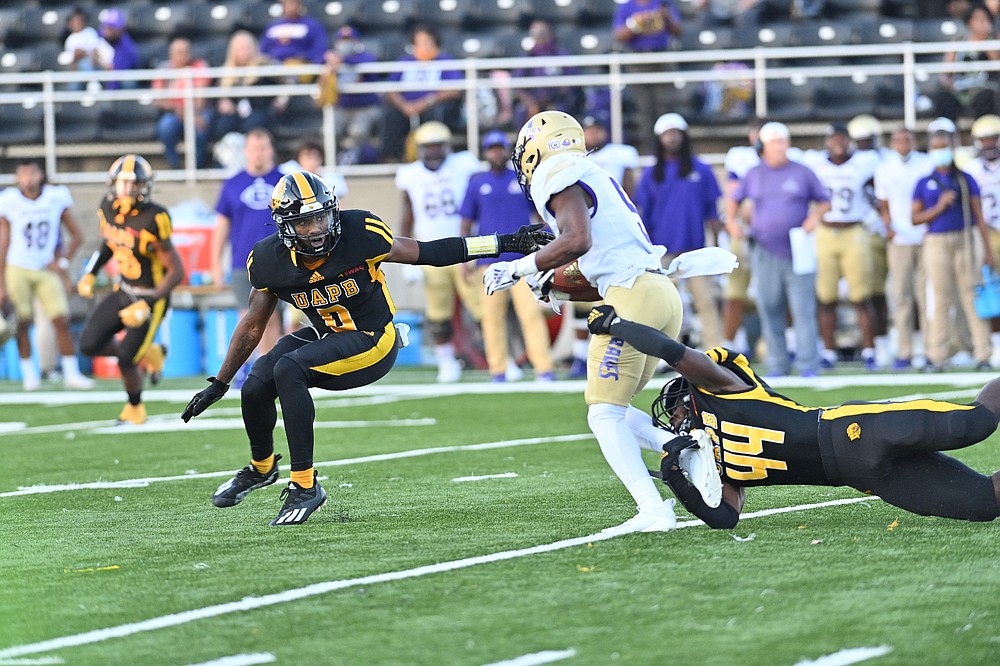 Print Headline: Visiting Alcorn State storms back to down UAPB