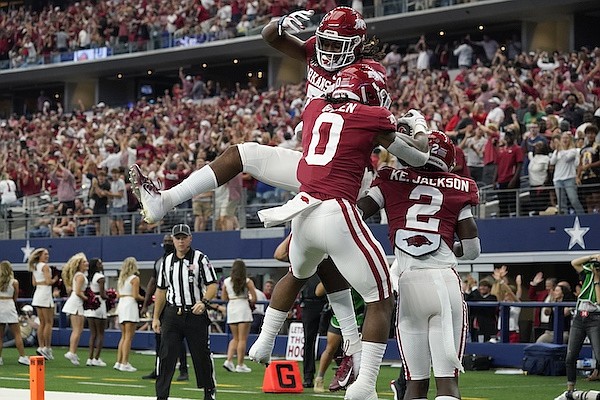 ARLINGTON, Texas — For the first time ever, Arkansas is coming home from Texas with a victory in a Southeastern Conference football game.

The No. 16 Razorbacks defeated No. 7 Texas A&M 20-10 on Saturday in the Southwest Classic at AT&T Stadium. It was the first time the Razorbacks beat the Aggies since Texas A&M joined the SEC for the 2012 season.

Arkansas built a 17-0 first-half lead, then held on in the second half when starting quarterback KJ Jefferson was in and out of the game with a bruised knee. Pittman said Jefferson had numbing gel applied to his knee, but it took a long time for the ointment to take effect.

Backup quarterback Malik Hornsby played all or part of three second-half drives. Hornsby completed 1 of 3 passes for 7 yards, and rushed 6 times for 12 yards.

Hornsby led a fourth-quarter scoring drive that helped the Razorbacks put the game away. Arkansas kicker Cam Little kicked a 24-yard field goal with 8:39 remaining to put the Razorbacks ahead 20-10.

"Extremely proud of Malik," Jefferson said. "I was in the huddle. I was in his ear and just telling him to be smart, play ball and play your game. That was the main thing, and I was cheering him on from the sidelines.

"It was awesome to see him go out there and take advantage of the opportunity that was handed to him."

Little’s second field goal — he made a career-long 46-yard attempt in the first quarter — came nine plays following an interception by Montaric Brown at the Texas A&M 48.

Arkansas' defense forced Texas A&M into a turnover on downs with less than two minutes remaining. Similar to a win over Texas two weeks ago in Fayetteville, the Razorbacks ran out the clock by kneeling inside the red zone in the final minute.

"When Mo picked that pass and we went down and went up 10, the clock was on our side at that point," Pittman said. "And then I was really proud of the way that we ended the game offensively, you know, here we could kneel it out with the ball."

The Aggies cut the Arkansas lead to 17-10 midway through the third quarter on a 67-yard touchdown run by Isaiah Spiller. Texas A&M kicker Seth Small gave the Aggies their first points with a 49-yard field goal in the closing seconds of the first half.

Arkansas led 17-3 at halftime, following a relentless first half of defense. The Razorbacks held Texas A&M to 134 yards on 39 plays in the first and second quarters.

"I thought the game, we got started off to a slow start," Texas A&M coach Jimbo Fisher said. "Like I say, you never win a game in the first quarter, but you can put yourself behind the 8-ball, and that's exactly what we did early in the game."

The Razorbacks scored on their first three possessions. Jefferson threw touchdown passes of 85 yards to Treylon Burks and 48 yards to AJ Green during a 3-minute, 32-second span late in the first quarter and early in the second quarter to put Arkansas ahead 17-0.

Jefferson, who returned to the game with 7:04 remaining, passed for 212 yards and rushed for 50 yards before an end-of-game kneel down inside the Texas A&M red zone. Burks had six receptions for 167 yards.

Arkansas defeated a former Southwest Conference rival for the third time in four weeks to open the season. The Razorbacks beat Rice 38-17 in the season opener on Sept. 4 and then-No. 15 Texas 40-21 on Sept. 11.

The Razorbacks are scheduled to play at No. 2 Georgia next Saturday at 11 a.m.