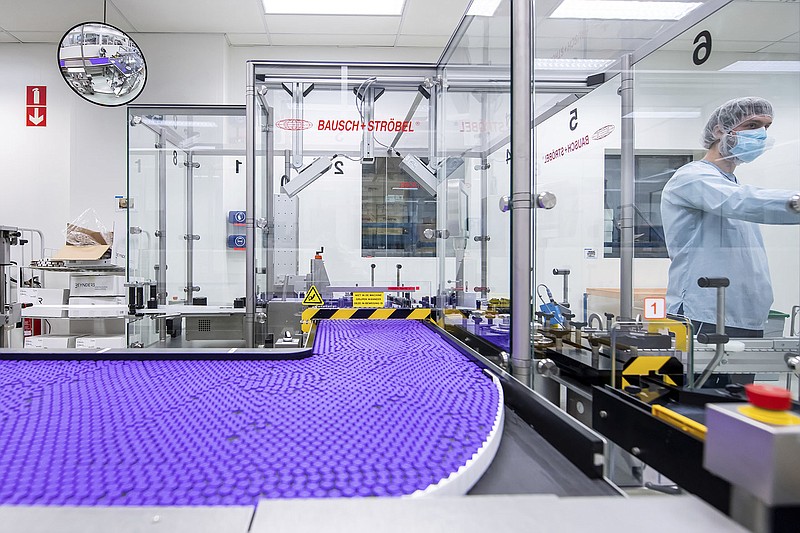 FILE - In this March 2021 photo provided by Pfizer, a technician works on a line for packaging preparation for the Pfizer-BioNTech COVID-19 vaccine at the company's facility in Puurs, Belgium. Billions more in profits are at stake for some vaccine makers as the U.S. moves toward dispensing COVID-19 booster shots to shore up Americans' protection against the virus. (Pfizer via AP)

Billions more in profits are at stake for some vaccine-makers as the U.S. moves toward dispensing booster shots to shore up Americans' protection against the coronavirus.

How much the manufacturers stand to gain depends on how big the rollout proves to be.

U.S. health officials late on Thursday endorsed booster shots of the Pfizer vaccine for all Americans 65 and older -- along with tens of millions of younger people who are at higher risk from the coronavirus because of health conditions or their jobs.

Officials described the move as a first step. Boosters likely will be offered even more broadly in the coming weeks or months, including boosters of vaccines made by Moderna and Johnson & Johnson. That, plus continued growth in initial vaccinations, could mean a huge gain in sales and profits for Pfizer and Moderna in particular.

"The opportunity quite frankly is reflective of the billions of people around the world who would need a vaccination and a boost," Jefferies analyst Michael Yee said.

Wall Street is taking notice. The average forecast among analysts for Moderna's 2022 revenue has jumped 35% since President Joe Biden laid out his booster plan in mid-August.

Most of the vaccinations so far in the U.S. have come from Pfizer, which developed its shot with Germany's BioNTech, and Moderna. Pfizer has inoculated about 99 million people and Moderna about 68 million. Johnson & Johnson is third with about 14 million inoculations.

No one knows yet how many people will get the extra shots. But Morningstar analyst Karen Andersen expects boosters alone to bring in about $26 billion in global sales next year for Pfizer and BioNTech and around $14 billion for Moderna if they are endorsed for nearly all Americans.

Those companies also may gain business from people who got other vaccines initially. In Britain, which plans to offer boosters to everyone over 50 and other vulnerable people, an expert panel has recommended that Pfizer's shot be the primary choice, with Moderna as the alternative.

Andersen expects Moderna, which has no other products on the market, to generate a roughly $13 billion profit next year from all covid-19 vaccine sales if boosters are broadly authorized.

Potential vaccine profits are harder to estimate for Pfizer, but company executives have said they expect their pretax adjusted profit margin from the vaccine to be in the "high 20s" as a percentage of revenue. That would translate to a profit of around $7 billion next year just from boosters, based on Andersen's sales prediction.

Johnson & Johnson and Europe's AstraZeneca have said they don't intend to profit from their covid-19 vaccines during the pandemic.

For Pfizer and Moderna, the boosters could be more profitable than the original doses because they won't come with the research and development costs the companies incurred to get the vaccines on the market in the first place.

Drugmakers aren't the only businesses that could see a windfall from delivering boosters. Drugstore chains CVS Health and Walgreens could bring in more than $800 million each in revenue, according to Jeff Jonas, a portfolio manager with Gabelli Funds.

Jonas noted that the drugstores may not face competition from mass-vaccination clinics this time around, and the chains are diligent about collecting customer contact information. That makes it easy to invite people back for boosters.

Drugmakers also are developing shots that target certain variants of the virus, and say people might need annual shots like the ones they receive for the flu. All of that could make the vaccines a major recurring source of revenue.

The covid-19 vaccines already have done much better than their predecessors.

Pfizer said in July that it expects revenue from its covid-19 vaccine to reach $33.5 billion this year, an estimate that could change depending on the impact of boosters or the possible expansion of shots to children in elementary grades.

That would be more than five times the $5.8 billion racked up last year by the world's most lucrative vaccine -- Pfizer's Prevnar13, which protects against pneumococcal disease.

It also would dwarf the $19.8 billion brought in last year by AbbVie's rheumatoid arthritis treatment Humira, widely regarded as the world's top-selling drug.

This bodes well for future vaccine development, noted Erik Gordon, a business professor at the University of Michigan.

Vaccines normally are nowhere near as profitable as treatments, Gordon said. But the success of the covid-19 shots could draw more drugmakers and venture capitalists into the field.

"The vaccine business is more attractive, which, for those of us who are going to need vaccines, is good," Gordon said.

Searches for covid-19 tests on Google are surging as the delta variant spreads in the U.S. and more employers and large-scale events require testing.

The number of Americans looking up "at-home covid test near me" on the platform has doubled in the past month, according to Google Trends, while those asking how long rapid test results take is up by 250%. In the past week, users also were more interested in searches related to tests, rather than vaccines, in most states, with Louisiana and Mississippi as exceptions.

The highly contagious delta variant has kept cases high in the U.S. This is creating the need for more tests as children return to school, workplaces resume activities and consumers head back to concerts and events.

This appears to have taken manufacturers by surprise after months of flagging demand.

Last month, CVS Health Corp. limited the number of over-the-counter covid-19 tests costumers could get to six online and four in its stores, citing high demand. Some other online retailers have run out of rapid tests.

While public-health experts have advocated for wide access to rapid, at-home testing since the start of the pandemic, the technology was slow to become available for use by consumers outside of medical settings. Only about half a dozen at-home rapid tests have been authorized by the U.S. Food and Drug Administration, which has limited availability.

With about 81 million Americans working at firms with 100 or more employees as of early 2020, according to the U.S. Bureau of Labor Statistics, if a quarter remain unvaccinated, around 20 million tests could be needed every week by U.S. companies. That's double the current rate of testing, according to data compiled by Bloomberg.

The Biden administration also recently announced plans to require either vaccination or weekly testing for companies with 100 or more employees. That is on top of the federal-worker mandate.

The mandate, which affects well over 150,000 people working in the nation's largest school system, was set to go into effect at midnight Monday. Educators, parents and union officials have been expecting the likelihood of staffing shortages and disruption in at least some schools where significant numbers of educators and staff members are not vaccinated.

A judge for the U.S. Court of Appeals for the 2nd Circuit granted the injunction on a temporary basis and referred the case to a panel of three judges for review. City officials said they expected the review and ruling to take place in the next few days, possibly even over the weekend, and anticipated that the mandate would be upheld. But it is not clear if the issue will be resolved before the Monday deadline.

Last week, a state Supreme Court justice ruled that the city could move forward with the mandate, after considering a separate but similar lawsuit filed by a coalition of unions that represents employees in public schools. The justice, Laurence Love, said state and federal courts have consistently upheld mandatory vaccination orders.

And Thursday, a federal judge in Brooklyn, Brian Cogan, declined to grant the injunction sought by a group of teachers, calling the mandate "a rational policy decision surrounding how best to protect children during a global pandemic." The teachers then appealed, successfully, to the Court of Appeals.

At least 90% of New York City teachers and 95% of principals are vaccinated. The rate is lower -- about 82% -- among staff members in school buildings.

Leaders of the unions representing the city's teachers and principals have called on de Blasio to delay the implementation of the mandate, arguing that schools are not prepared to deal with staffing crunches.

The mandate, which was announced last month, requires all educators, along with workers like custodians, school lunch helpers and safety agents, to receive at least one dose of a coronavirus vaccine by Monday night. It is the first vaccine mandate without a test-out option for any group of city workers.

"We're confident our vaccine mandate will continue to be upheld once all the facts have been presented, because that is the level of protection our students and staff deserve," a spokesperson for the Department of Education, Danielle Filson, said in a statement.

Covid-19 cases in children have risen significantly during the surge that coincided with the start of the school year, making it difficult for some Tennessee school districts to provide in-person education. Some schools have closed classrooms, while others have temporarily switched to virtual learning as students are forced to quarantine or isolate.

The decision, handed down by U.S. District Judge Waverly Crenshaw late Friday, is the latest development in the ongoing legal battle over Lee's order initiated by parents and advocates alarmed over the spike in coronavirus cases in Tennessee's schools.

Lee issued the order in August after a handful of Republican lawmakers demanded the governor call a special session so the GOP-dominant General Assembly could halt mask mandates in schools and other covid-19 safety measures. Many students have been attending classes without masks ever since as pediatric hospitalizations reached record highs.

All three lawsuits claimed that Lee's order violates the Americans with Disabilities Act, which prohibits the exclusion of students with disabilities from public educational programs and activities. Children with certain disabilities are more vulnerable to serious illness or death if they get covid-19, the CDC has said.

"Based on the record before the court, due to the rise in covid-19 cases in Williamson County, including at plaintiffs' schools, along with a significant number of students who have opted out, plaintiffs have likewise been denied access to a safe, in-person education experience," Crenshaw wrote in his 18-page decision.

"Gov. Lee has offered no affidavits, declarations, or any other factual predicate to support his assertion that universal mask mandates would require significant resources," the judge added.

Lee told reporters Friday that he couldn't talk about the specific litigation but pointed out that there had been numerous lawsuits against mask mandates.

"There are very strong opinions on both sides of this. I think that's why the strategy we took, which allowed districts to provide a requirement but gave parents an opt-out, was a good way forward," Lee said. "And we still believe that's the right direction."

Crenshaw's ruling is in effect until Oct. 5, the same day Lee's order is set to expire. The governor has not said whether he will extend it.

Information for this article was contributed by Tom Murphy and Kimberlee Kruesi of The Associated Press; by Augusta Saraiva and Emma Court of Bloomberg News; and by Eliza Shapiro and Jonah E. Bromwich of The New York Times.