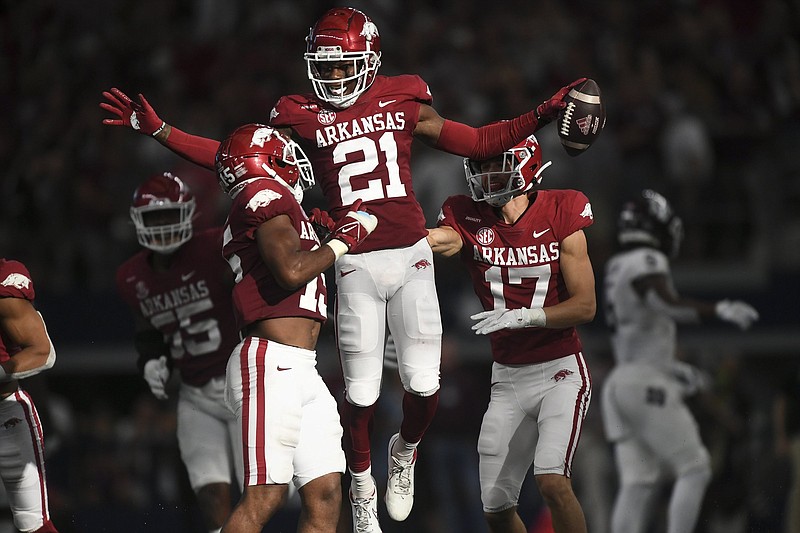 ARLINGTON, TEXAS -- All of the Arkansas Razorbacks' hexes in Texas are dead.

Breakaway touchdowns, bruising defense and a big dose of grit ended the University of Arkansas' long-running woes against Texas A&M in low-scoring slugfest on Saturday.

The No. 16 Razorbacks never trailed in a convincing 20-10 win before a crowd of 57,992 at AT&T Stadium, easing the heartache of a nine-game losing streak to the No. 7 Aggies.

"I'm hoping that the whole state and everybody that follows football is ecstatic about the Hogs winning," Arkansas Coach Sam Pittman said. "Again, I think this is what should happen.

"I mean, we've got a tough football team. I'm proud of that fact."

Jubilant Razorbacks raced to the northeast corner of the stadium at game's end to snag the Southwest Classic Trophy from Cowboys owner Jerry Jones, the former Razorback standout lineman who couldn't contain a smile.

Arkansas left Texas with an SEC victory for the first time in nine tries since the Aggies joined the league in 2012.

"I'm worn out. I'm tired. But I'm excited to get back to Fayetteville and take that trophy with us," said Arkansas sixth-year linebacker Grant Morgan.

"It means a lot knowing that they beat us nine straight years, and [current players] had never beaten Texas A&M," said Arkansas quarterback KJ Jefferson, who passed for 212 yards.

The Razorbacks' opening month produced a 3-0 record against former Southwest Conference rivals Rice, Texas and Texas A&M and two wins over top 15 opponents. The Razorbacks, who outgained the Aggies 443-272 in total offense, also set up a major matchup next week at No. 2 Georgia.

"I know that we're 4-0. We beat [No.] 15 and beat 7 or 5," Pittman said. "And, you know, somebody will say, 'Well, Texas A&M ain't any good just because Arkansas beat them. And some will say Texas ain't any good because Arkansas beat them. But I believe both of them's really good. And I think the Razorbacks have a good football team. So that's how it is.

"I'm not even thinking about Georgia. Kirby [Smart], Kirby wins 100-0 or whatever today. Kirby will be ready to go."

The Razorbacks are up to heady stuff in Pittman's second season.

"I'm not going to lie to you," said Arkansas wideout Treylon Burks, who had six catches for 167 yards and a touchdown. "It really doesn't feel like we're 4-0. It feels like we're playing our ball, having fun with it."

Arkansas defensive end Tre Williams ravaged the left edge of the overmatched Texas A&M line, racking up two sacks and three holding calls, one of which was declined. Williams ended the Aggies' final hope by hitting Zach Calzada to force a fourth-down pass into the turf after he had been held by Kenyon Green.

"The whole game it was a different guy coming in," Williams said of the Aggies' revolving door at left tackle on the Razorback Sports Network. "I just tried to show them what I can do and just see what their weak points are and get to the quarterback and be effective."

The Arkansas defense gave up a 67-yard touchdown run to Isaiah Spiller midway through the third quarter that cut the Aggies' deficit to 17-10, but Texas A&M managed just 41 yards the rest of the game.

"Arkansas played a very good game, a very physical game," Texas A&M Coach Jimbo Fisher said. "They did the things they had to do to win the game. The plays they made, they got going."

Arkansas ran a three-man defensive front that troubled the Aggies' blocking schemes and also applied pressure to quarterback Zach Calzada, who was 20 of 36 for 151 yards and was sacked three times.

Arkansas outrushed the Aggies 197-121 and would've gone for 200 rushing yards if not for taking a 4-yard kneel down to end the game from the Texas A&M 11.

Jefferson passed for his 212 yards against A&M's No. 1 ranked pass defense on 7 of 15 completions and added 50 rushing yards.

The Razorbacks overcame injuries to Jefferson and Burks, who both said they were fine in postgame interviews.

Arkansas got all the points it would need by racing out to a 17-0 lead through its first three possessions and racking up a 307-134 edge in first half offense to build a 17-3 lead.

Jefferson connected with Burks on an 85-yard touchdown pass, beating cornerback Myles Jones to open the Hogs' second series for a 10-0 lead.

"I just saw it was man-to-man, safety was kind of in the middle of the field, so I know if I held him just a little second, I would be able to get the ball to Treylon as quick as possible," Jefferson said. "He just beat the defender and made a great play on the ball."

Said Burks, "They left a man out wide and coach [Kendal Briles] called it, and KJ and I executed, O-line blocked, got the play."

The Razorbacks came out smoking, as Trelon Smith sliced behind nice blocks and used cutbacks to go for 16, 15 and 12 yards on the first three snaps. That drive stalled at the A&M 29 and Cam Little came on to boot a career-best 46-yard field goal.

The Razorbacks also put together a three-play scoring drive, capped by AJ Green's 49-yard catch-and-run touchdown on its third possession to go up 17-0.

"You never win a game in the first quarter, but you can put yourself behind the 8-ball, and that's exactly what we did early in the game."

The Hogs survived the temporary loss of Jefferson, who hit the top of his knee after taking a massive shove from Aaron Hansford on the sideline on the first play of the third quarter. Jefferson remained in the game for a few plays after, but gave way to Malik Hornsby for three series.

The Aggies appeared to be clamping down on the Arkansas run game with Hornsby at the helm, but the redshirt freshman produced one critical sequence early in the fourth quarter after the game's only takeaway.

Arkansas cornerback Montaric Brown made a diving interception he controlled while hitting the turf after the ball deflected off an Aggies' helmet and linebacker Bumper Pool's fingers early in the fourth quarter. The interception held up on replay and set Hornsby and the Hogs up at the A&M 48.

Hornsby engineered a nine-play, 42-yard drive that reached the 1-yard line before a false start moved the Hogs back five yards. Tight end Blake Kern jumped for but couldn't haul in Hornsby's roll-out pass in the end zone on third down and Little made a 24-yard field goal for the 20-10 lead.

Calzada didn't get comfortable in the pocket against Arkansas' three-man rush and had 12 of his 20 completions to running backs.

While Jefferson averaged 30.2 yards on his seven completions, Calzada averaged 7.6 yards per completion with the repeated screens and check-downs to his backs.

"As a defense, we know what we had to do," Morgan said. "We had to stop the run. We knew we had to limit explosive plays. I think we did a good job at that. I know that's a really good football team that we just beat, so hats off to them."