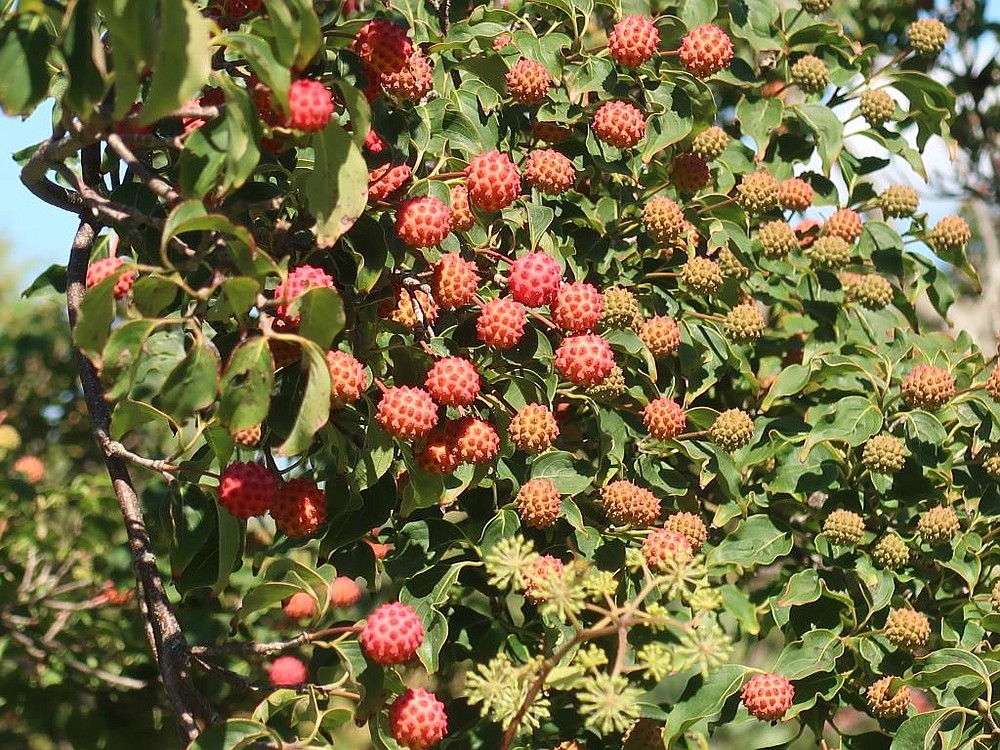 Kousa Dogwood or Chinese dogwood. Cornus kousa has been in the garden trade for a long time. The small deciduous tree blooms after the foliage comes on, as opposed to our native dogwood which blooms before the leaves appear. The flowers are more star shaped 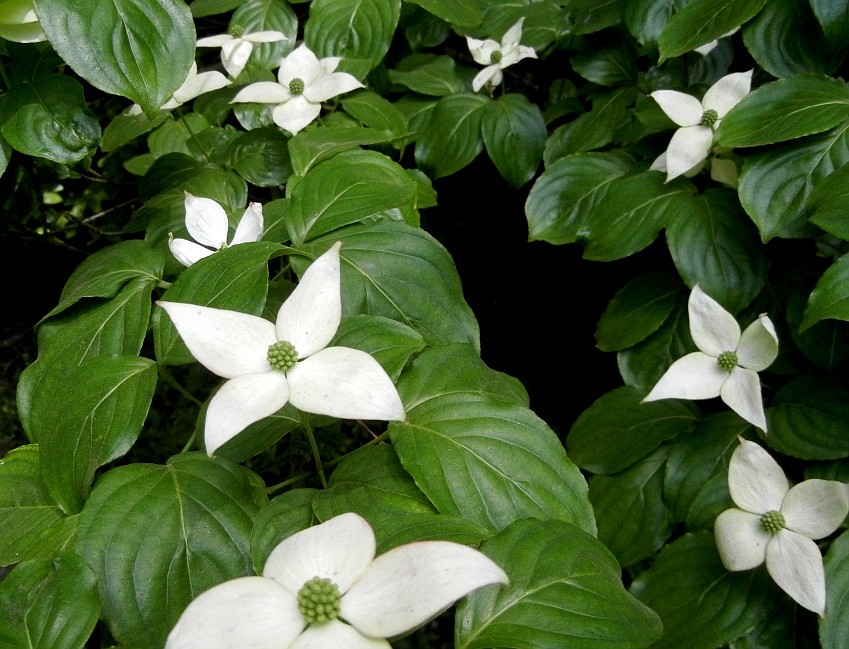 than rounded. The biggest attribute is the showy fruits, which many of you compared to the covid virus picture! Maybe a new common name is in the making. There are numerous varieties, and even a few pink flowering ones. There are also a variety of botanical names. I have always known it as Cornus kousa. In Maine, the label stated Benthamidia japonica var. chinensis—a name I had never heard before. According to Dirr, Cornus kousa var. chinensis reportedly has bigger blooms, but he thinks there are similar attributes in many varieties. The resulting fruits are usually not as large in a warm climate 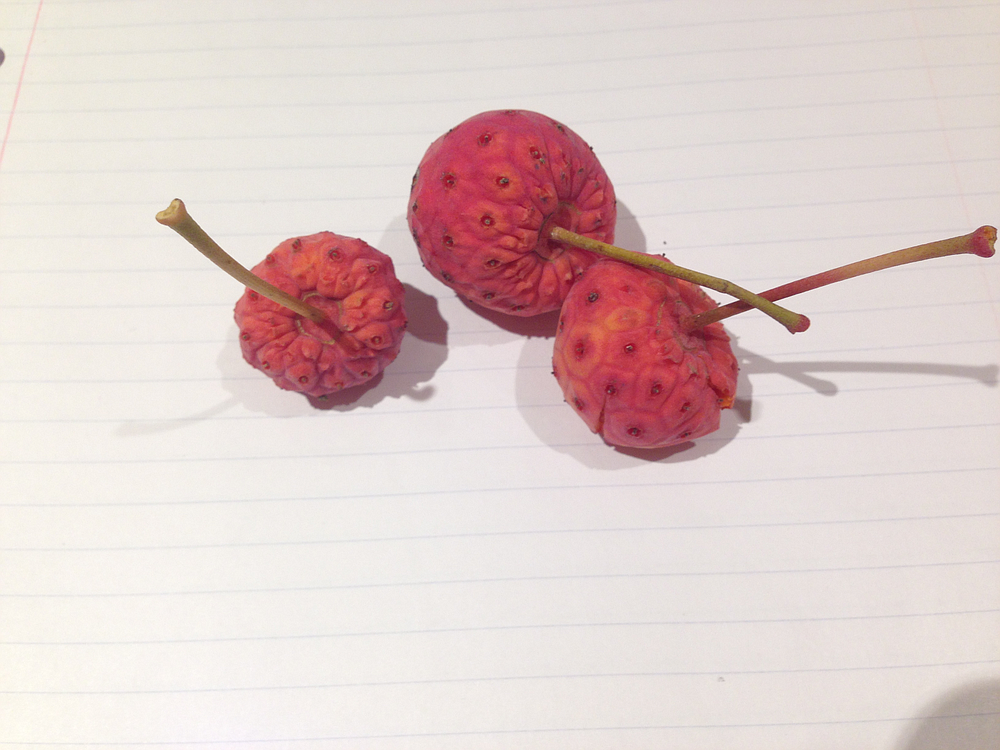 as they are further north as evidenced by the fabulous display in Maine, but the tree is a bit tougher than our native species. 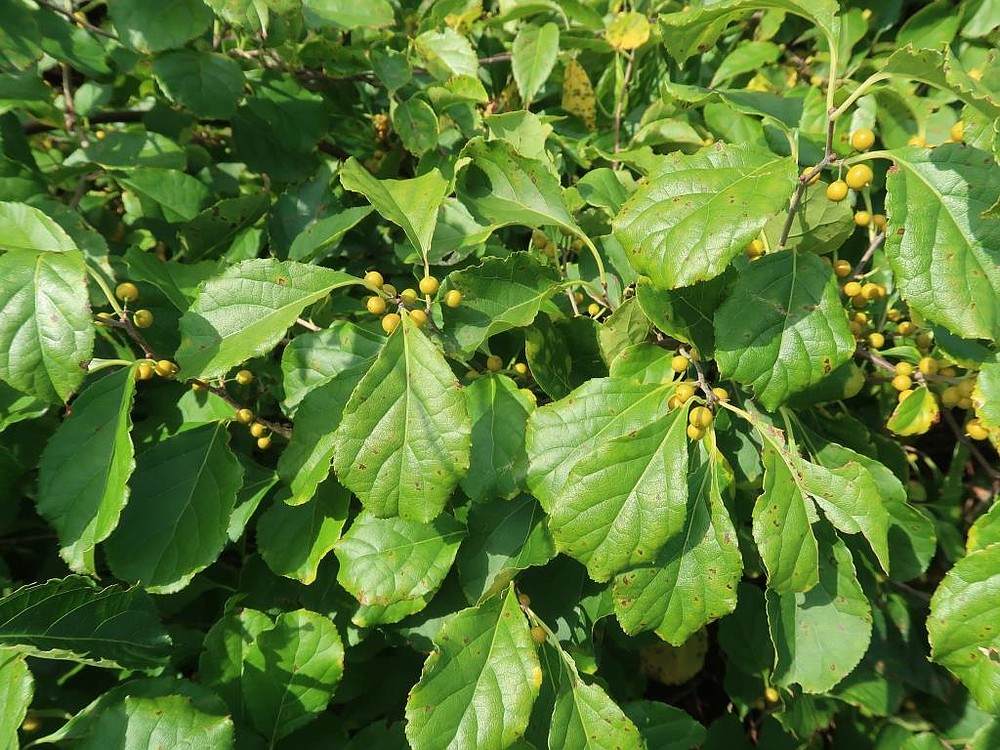 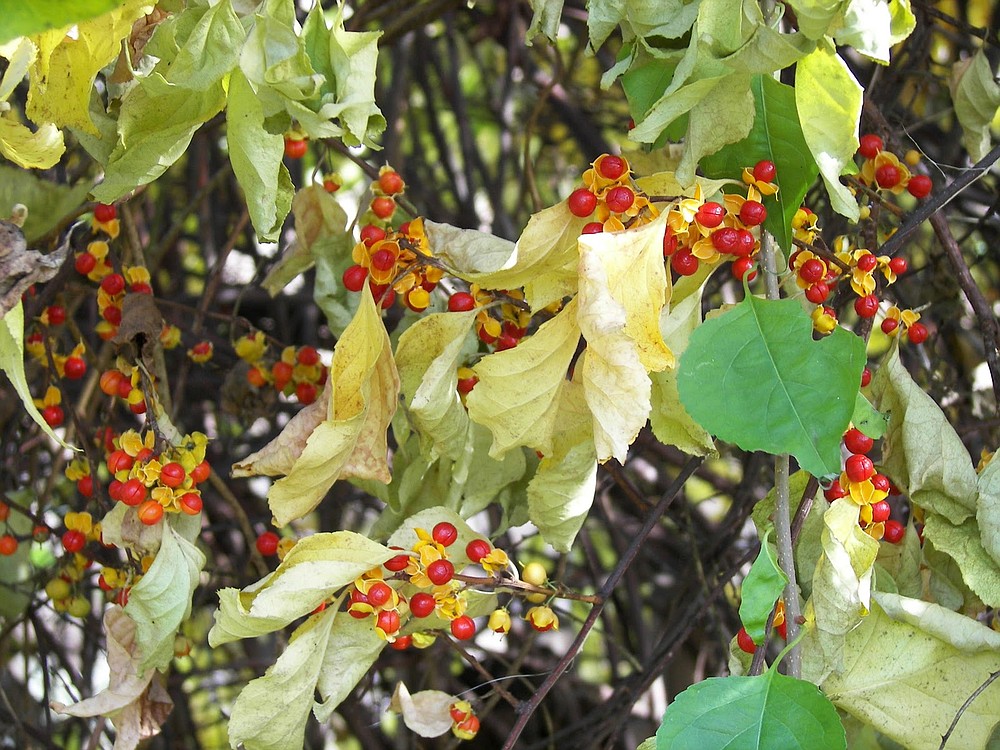 is a of the aster family that blooms in late summer through fall. The family includes a wide range of annuals and perennials, and many new cultivars are available. Most of the perennials are relatively short-lived but newer varieties appear annually. Flowers come in shades of yellow, orange and red. 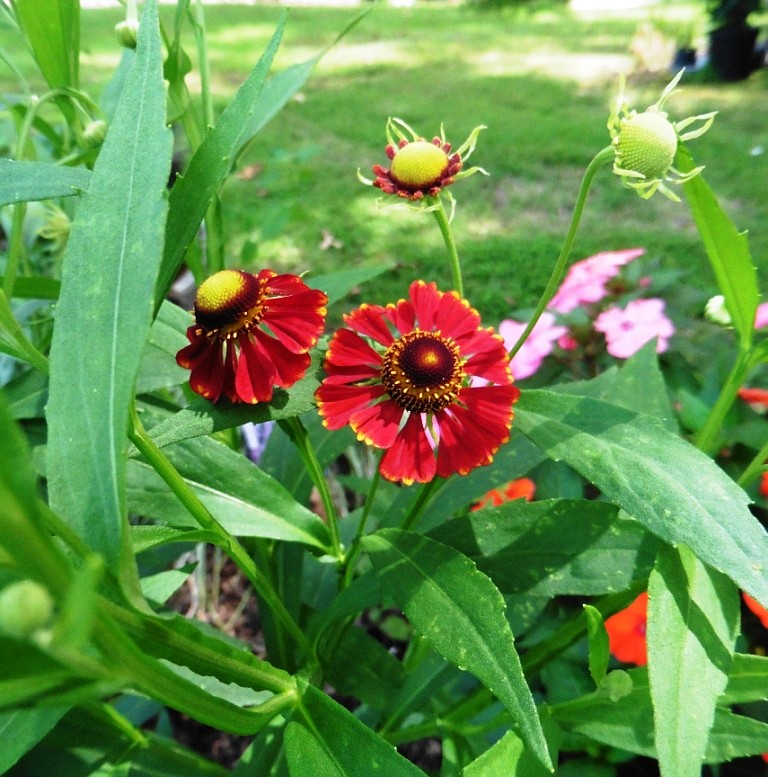 It prefers full sun and even moisture. The bees love them. There is an interesting story about the Latin name Helenium. It supposedly refers to Helen of Troy. The plant is said to have sprouted from the ground where she wept tears. The common name sneezeweed comes from its use by Native Americans in a snuff-like product that induced sneezing.

Trumpetcreeper – Campsis radicans. While most of you are familiar with our native Trumpetcreeper, this picture stumped everyone. 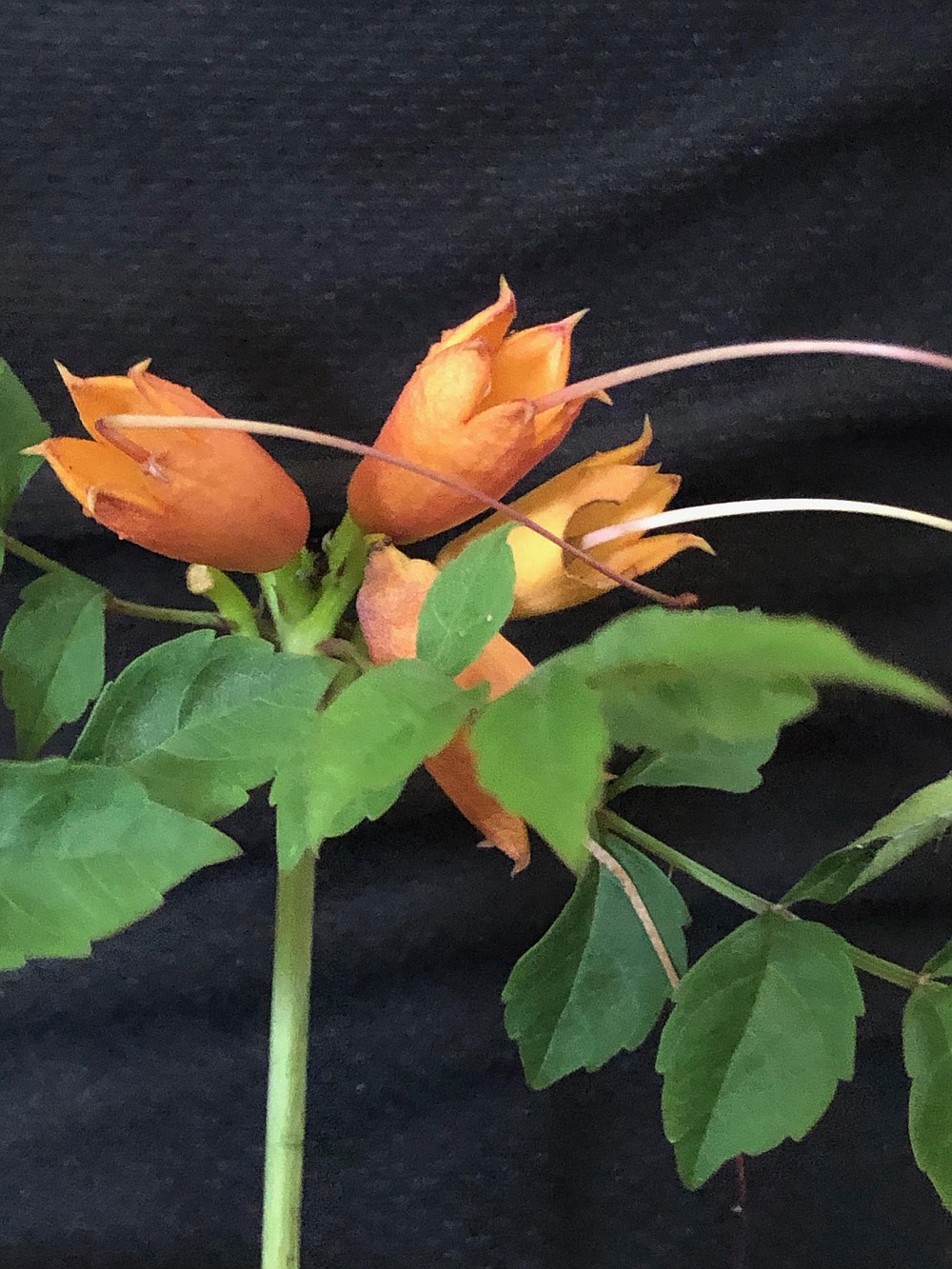 I got it from Sherrie Smith, the plant pathologist for Extension. When I saw the leaves, I immediately said some variety of Trumpetcreeper, but the bloom threw me. Then when I looked further, I realized the flower petals had fallen off, leaving behind the sepals and the pistil attached to the ovary (where a seedpod can form). 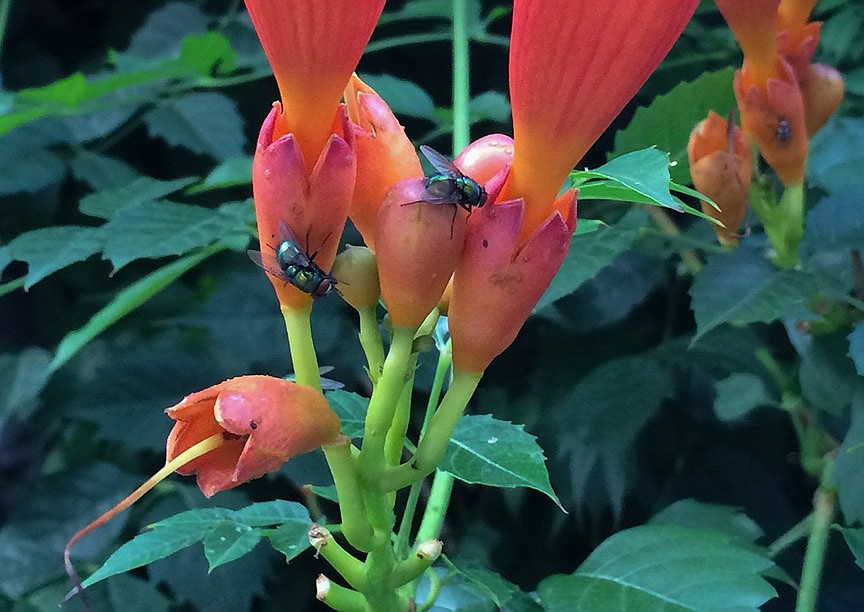 If one complete bloom 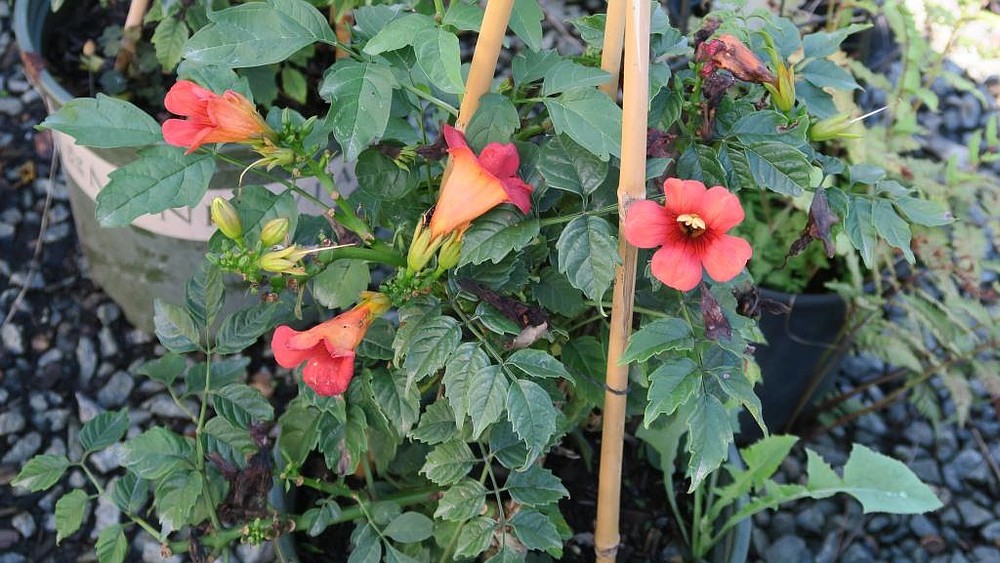 had been left attached, I think everyone would have guessed it. Sometimes, you have to look further.