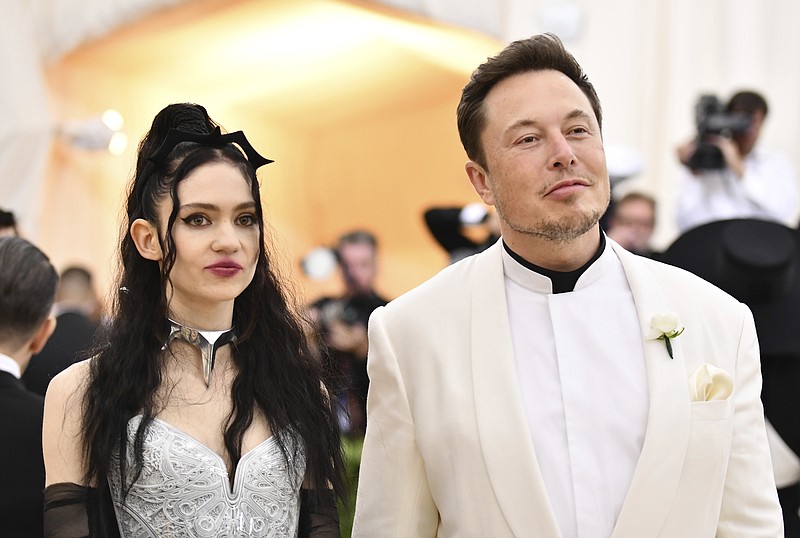 FILE - Grimes, left, and Elon Musk attend The Metropolitan Museum of Art's Costume Institute benefit gala in New York on May 7, 2018. The Tesla and SpaceX founder tells the New York Post that he and the Canadian singer are &#x201c;semi-separated.&#x201d; But he says they remain on good terms, she still lives at his house in California and they continue to raise their 1-year-old son together. (Photo by Charles Sykes/Invision/AP, File)

• Elon Musk and singer Grimes have ended their romantic relationship after three years. The Tesla and SpaceX founder told the New York Post's Page Six that he and the Canadian singer are "semi-separated." But he said they remain on good terms, she still lives at his house in California, and they continue to raise their 1-year-old son together. "It's mostly that my work at SpaceX and Tesla requires me to be primarily in Texas or traveling overseas, and her work is primarily in LA," Musk told the Post. "She's staying with me now, and Baby X is in the adjacent room." The 50-year-old entrepreneur has six children from previous relationships; one of them died as a baby. He's been married three times, including twice to "Westworld" actress Talulah Riley. Grimes has not been married, and her son with Musk is her first child.

• Joe Biden sat down with Narendra Modi on Friday for talks about the Indo-Pacific region. But first, the president and India's prime minister caught up on Biden's family ties to the subcontinent. Biden recalled that soon after he was first elected to the U.S. Senate, he got a letter from a man in Mumbai who said his last name was also Biden. The president said he never had the chance to follow up. Later, as vice president, Biden was in India and recalled being asked by local press if he had any Indian relatives. He retold the story of the letter. The next day, Biden said, he was informed by Indian press that there were at least a few Bidens in India. "And although we never admitted it ... I've found out that there was a Capt. George Biden who was a captain in the East India Tea Company in India," Biden said. He appeared to be referring to the British East India Company, a commercial power for centuries that controlled trade in colonized India and parts of southeast Asia. Biden, who frequently talks of his Irish ancestry, quipped that the British connection was "hard for an Irishman to admit." He said Capt. Biden "apparently stayed and married an Indian woman," but he'd never been able to nail down any details. He joked that Modi was in Washington "to help me figure it out." In fact, Modi told the president that he'd hunted for documents that would shed light on the president's Mumbai connection and brought his findings with him. "Are we related?" Biden asked. The prime minister confirmed that the 46th U.S. president did indeed have family connections to the subcontinent. "Maybe we'll be able to take this matter forward, and maybe those documents could be of use to you," Modi told Biden.