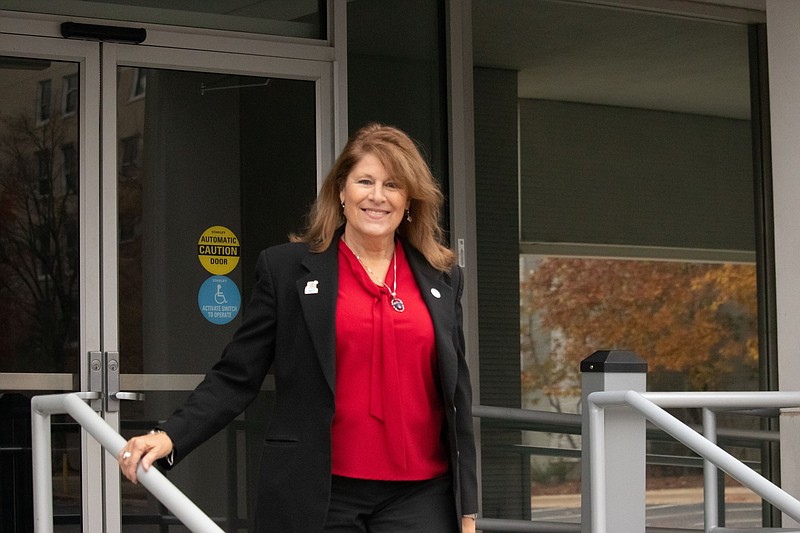 Pamela Whitaker, a businesswoman and nonprofit founder, poses in this undated publicity photo. Whitaker announced Wednesday, Sept. 29, 2021, that she intends to run for mayor of Little Rock in 2022.

Pamela Whitaker, a businesswoman and nonprofit founder, announced Wednesday that she intends to run for mayor of Little Rock in next year's election.

Whitaker, 66, presumably will face Mayor Frank Scott Jr. as he seeks a second term, though the mayor has yet to formally announce a reelection effort. Scott was elected in a December 2018 runoff over attorney Baker Kurrus.

According to a news release, Whitaker has lived in Ward 1, which encompasses downtown and the surrounding communities, for nine years.

She is chief executive officer of East Coast Awakening LLC, which a campaign news release described as "a security and drone services firm" she started in 2012.

Whitaker is also founder of Cyber Fly Girls, a nonprofit meant to bolster the number of women in the fields of science, technology, engineering and math, commonly known as STEM.

"I envision a 'connected' Little Rock, a Little Rock that no longer bears the scars of systemic racism," she said in a statement included with the release. "A city that is planning for growth and reaches out with open arms to those who would join us. A Little Rock that is wise in its decisions in order to protect our earth, sky and water on which we conduct our businesses and build our homes."

According to her resume, in addition to her work for East Coast Awakening, Whitaker worked on technology controls and project management for Centennial Bank from February to November 2018 and as a technical program manager for Arkansas Children's Hospital from December 2016 to May 2017.

From 2013 to 2016, she was a technical consultant for the Department of Arkansas Heritage, according to her resume.

Referring to her experience with budget and audit controls, the release said Whitaker will ensure city departments are run efficiently and effectively.

"Because of my experience in process improvement, I have a step-by-step strategy for reducing ethically challenged operations within departments and organizations, and that would be on the top of my list as mayor," she said.

In March 2020, Whitaker ran as a Democrat in an unsuccessful challenge to Donna Massey for her District 6 seat on the Pulaski County Quorum Court.

When reached by phone Wednesday, Whitaker acknowledged she is not a registered Democrat. Voter information on file with the Arkansas secretary of state's office listed no party affiliation for Whitaker.

She described the 2020 race as "kind of a warm-up for me," and said she has not run for public office aside from that campaign.

Other candidates who have announced plans to run for Little Rock mayor in 2022 are Greg Henderson, the proprietor of food blog Rock City Eats, and Steve Landers, the founder of a chain of auto dealerships.