Some Democrats worry over end of asylum limits 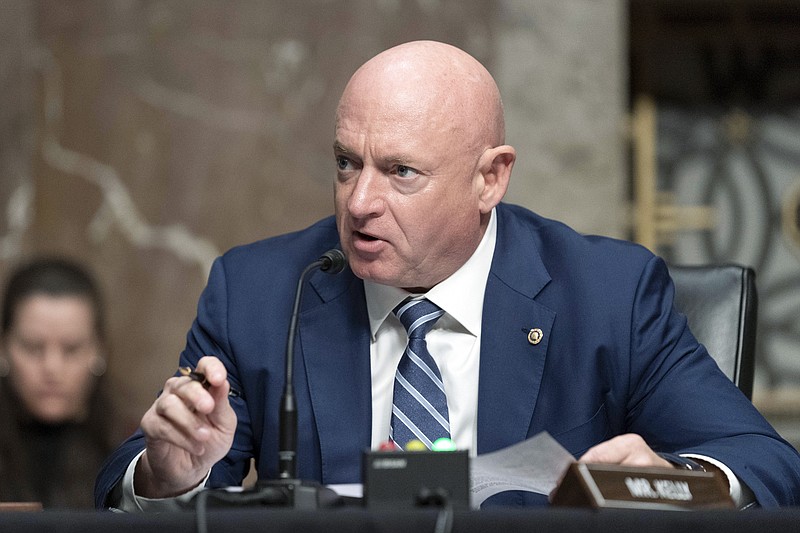 FILE - Sen. Mark Kelly, D-Ariz., speaks during a hearing of the Senate Armed Services Committee to on Capitol Hill, in Washington on March 24, 2022. “This is a crisis, and in my estimation, because of a lack of planning from the administration, it’s about to get worse,” said Sen. Mark Kelly of Arizona. Kelly and fellow Arizona Democratic Sen. Kyrsten Sinema met Wednesday, March 30, with Homeland Security Secretary Alejandro Mayorkas to press their case for the administration to better plan and coordinate a response. (AP Photo/Jose Luis Magana, File)

PHOENIX -- The Biden administration's decision to end asylum limits at the border in May satisfied demands by Democrats awaiting the end of a program created by Donald Trump in the name of public health.

But it creates political challenges for border-region Democrats who face the likely prospect of an increase in migrants who have for two years been denied the chance to seek asylum in the United States.

In critiques of a president from their own party, congressional Democrats with tough reelection prospects are warning that the administration is unprepared to handle the situation. Previous rises in migration have strained law enforcement agencies and nonprofits on the border trying to provide security and shelter.

"This is a crisis, and in my estimation, because of a lack of planning from the administration, it's about to get worse," said Sen. Mark Kelly, D-Ariz.

Kelly and fellow Arizona Democratic Sen. Kyrsten Sinema met Wednesday with Homeland Security Secretary Alejandro Mayorkas to press their case for the administration to better plan and coordinate a response. Last week, they wrote to President Joe Biden urging him to delay ending the pandemic rules until his administration is "completely ready to execute and coordinate a comprehensive plan that ensures a secure, orderly, and humane process at the border."

Sinema and Texas Republican Sen. John Cornyn sent a similar letter to Mayorkas on Thursday. Democratic Sens. Joe Manchin of West Virginia and Maggie Hassan of New Hampshire, another top target for Republicans, were critical of the decision Friday.

Kelly, Sinema and other skeptical Democrats say the emergency powers must go away eventually, but they say the federal government has failed to develop and share plans to minimize the impact on communities near the border and the local religious and nonprofit groups that help migrants there.

"I've worked really hard to make it very clear to them that this situation is unacceptable, and they seem to get the message," Kelly added. "It's more challenging to get them to turn this into an actionable plan."

Kelly, elected from once-conservative Arizona, is among the most vulnerable Democrats in the Senate. He's aggressively targeted by Republicans in what is already a tough year for Democrats who are fighting to hold onto their razor-thin majority in the Senate.

Kelly declined to discuss the impact of the decision on his tough reelection campaign, saying he's focused on his job as senator.

"They know the realities of Arizona and its history, especially as a border state," Mike Noble, a Phoenix-based pollster who used to consult for Republican campaigns but now focuses on nonpartisan polling, said of Arizona's senators. "If they want to maintain their seats, they have to be tough on immigration, and if not, they could find themselves out of a job."

Republicans see rising numbers of migrants as a winning issue with swing voters, particularly in border states like Arizona.

An AP-NORC poll conducted in January found just 39% of Americans approve of how Biden is handling immigration. Eighty-seven percent of Republicans said they disapprove, but so did 34% of Democrats.

"The entire country sees the failure of the Biden administration and the laughing matter that this is to Kamala Harris, the self-appointed czar," said Arizona Gov. Doug Ducey, the co-chair of the Republican Governors Association, which raises money to elect GOP governors. "They're gonna pay a hell of a price at the ballot box in November. In every state."

In Texas, Democratic Reps. Henry Cuellar and Vicente Gonzalez, both of whom represent border districts, joined Republicans in the Texas congressional delegation this week in expressing concern about ending Title 42.

"I did tell the White House, you understand that there will be vulnerable Democrats," Cuellar said. "They acknowledge those concerns. But I think the White House has been under tremendous pressure by the immigration activists. They're very vocal."

Encapsulating internal divisions among Democrats, Cuellar's primary opponent, immigration attorney Jessica Cisneros, said on Twitter that Cuellar's support for keeping Title 42 amounts to "cruel and inhuman treatment of people whose stories and families resemble our own."

Advocates for immigrants and refugees in Arizona say it's long past time for the Biden administration to stop using public health rules to prevent people from claiming asylum.

Arizona's senators seem to be looking at the border issue through a national political lens, said Joanna Williams, executive director of the Kino Border Initiative, which works in the twin border towns of Nogales, Ariz., and Nogales, Mexico.

"They are underestimating Arizonans," Williams said. "We really have a community of hospitality that can arise to the occasion and help people. The senators need to listen to what people here are saying. This isn't Texas."

Alex Miller, director of asylum-seekers and families for the International Rescue Committee in Arizona, said with coronavirus positivity rates among new arrivals now at less than 1% "the justification for closing the border is gone."

"There is just no excuse for denying people fleeing from terrible abuse from getting asylum," she said. "We have a moral responsibility to help these people."

Information for this article was contributed by Emily Swanson and Nomaan Merchant of The Associated Press. 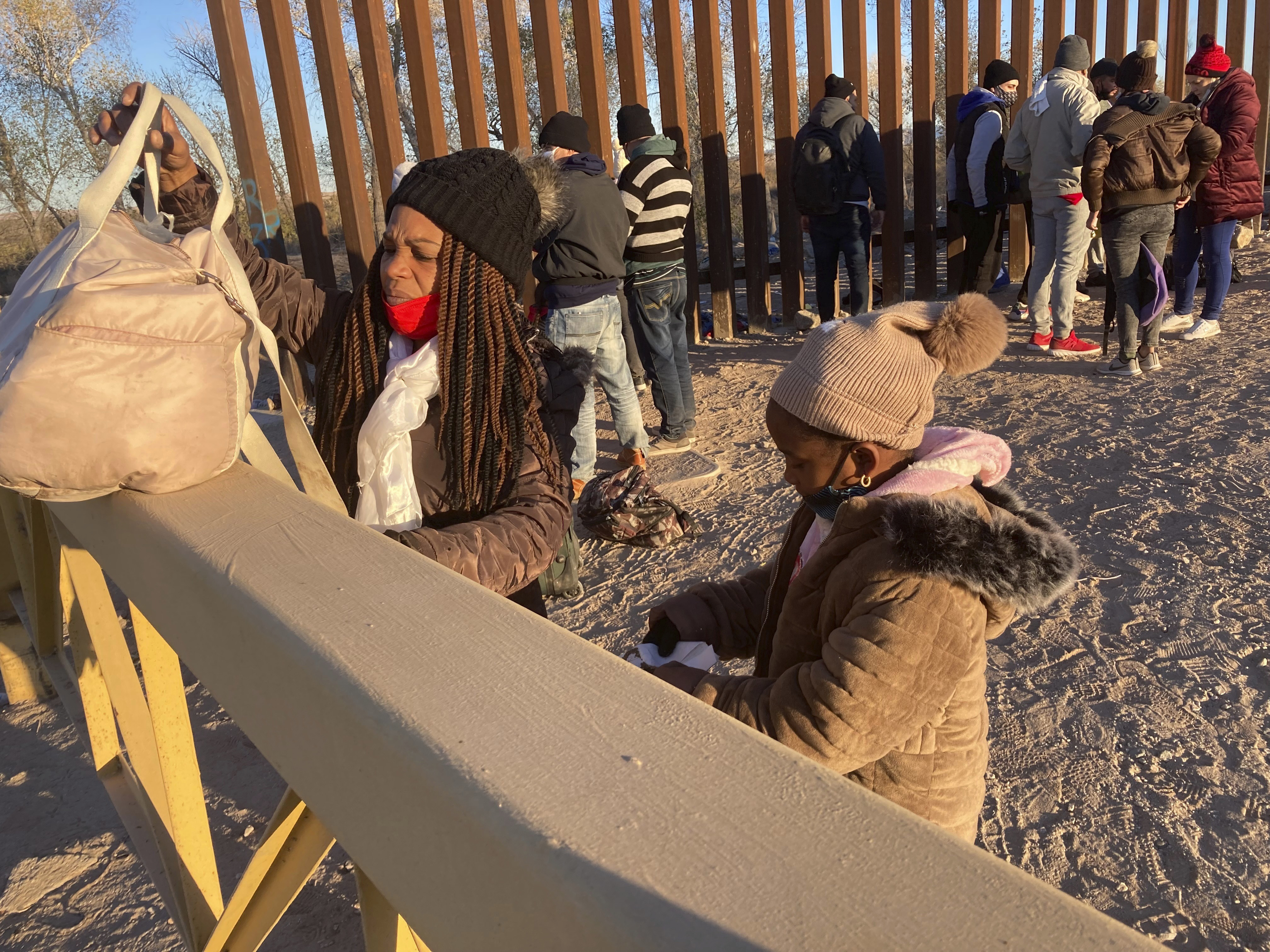 FILE - A Cuban woman and her daughter wait in line to be escorted to a Border Patrol van for processing in Yuma, Ariz., Feb. 6, 2022, hoping to remain in the United States to seek asylum. “This is a crisis, and in my estimation, because of a lack of planning from the administration, it’s about to get worse,” said Sen. Mark Kelly of Arizona. Kelly and fellow Arizona Democratic Sen. Kyrsten Sinema met Wednesday, March 30, with Homeland Security Secretary Alejandro Mayorkas to press their case for the administration to better plan and coordinate a response. (AP Photo/Elliot Spagat, File) 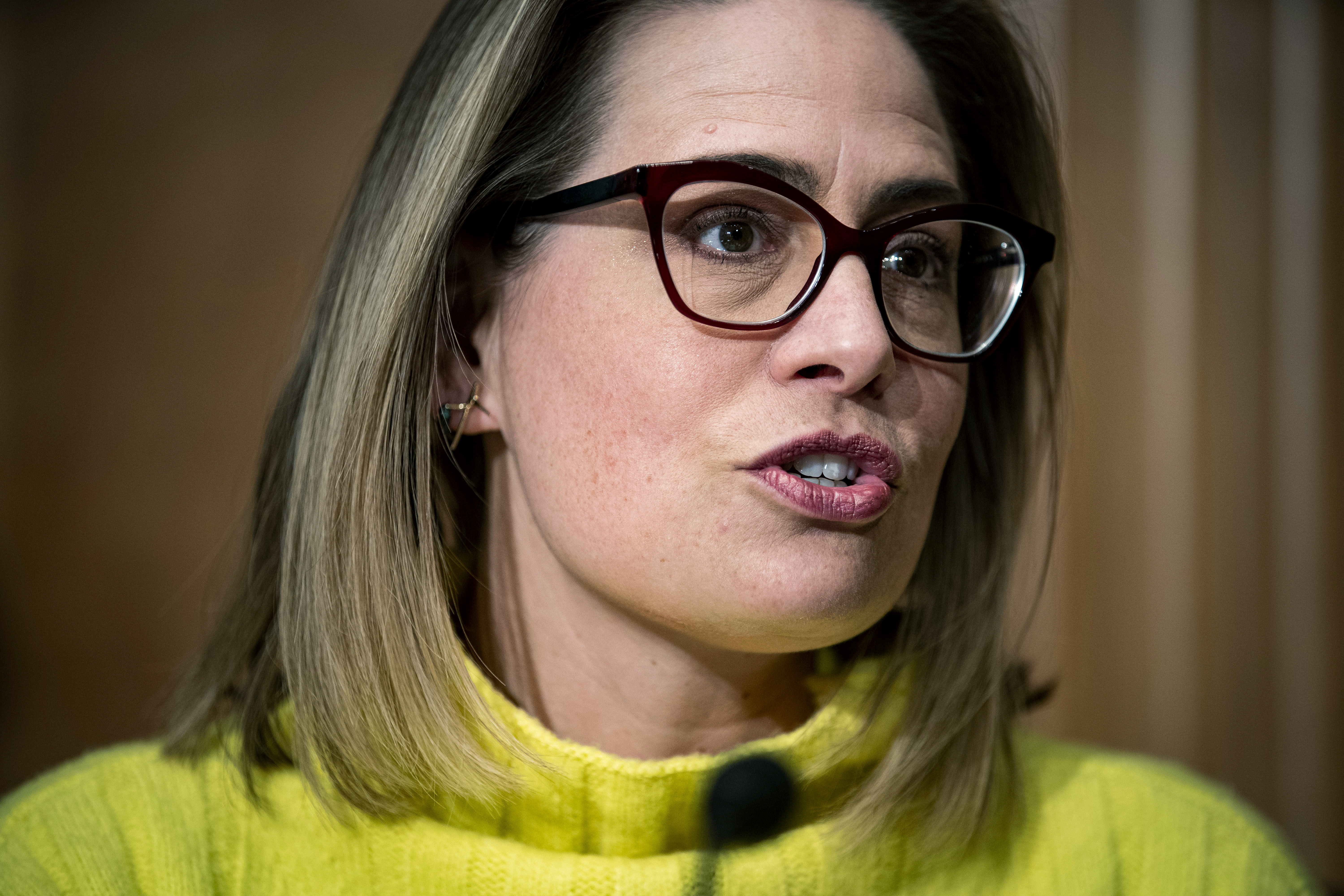 FILE - Sen. Kyrsten Sinema, D-Ariz., speaks during a Senate Homeland Security and Governmental Affairs Committee hearing on Feb. 1, 2022 in Washington. “This is a crisis, and in my estimation, because of a lack of planning from the administration, it’s about to get worse,” said Sen. Mark Kelly of Arizona. Kelly and fellow Arizona Democratic Sen. Sinema met Wednesday, March 30, with Homeland Security Secretary Alejandro Mayorkas to press their case for the administration to better plan and coordinate a response. (Al Drago/Bloomberg via AP, File)

Print Headline: Some Democrats worry over end of asylum limits