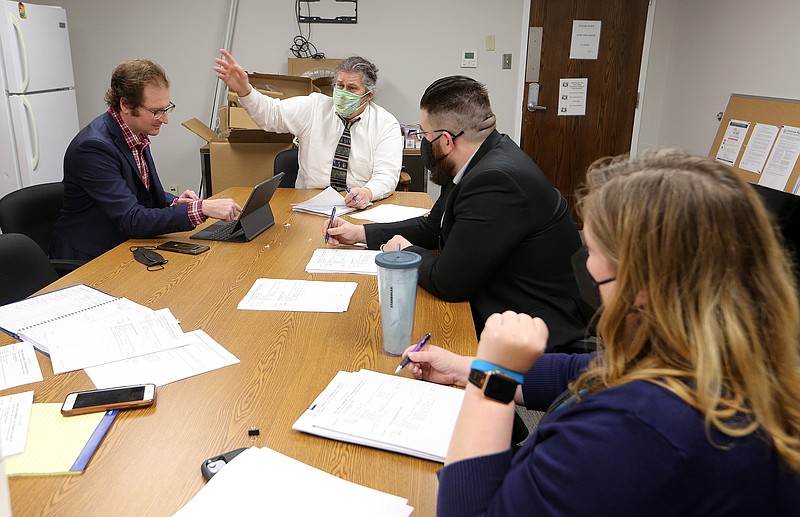 State officials have confirmed that Arkansas can use $7 million in coronavirus aid to bolster the ranks of overburdened public defenders and prosecutors.

The Arkansas Department of Finance and Administration, in coordination with a private consultant, has determined that the state can use the federal money to hire more attorneys, department Secretary Larry Walther said in a statement Thursday.

This means the Arkansas Public Defender Commission and the state prosecutor coordinator's office could each receive $3.5 million in relief funds for temporary or part-time positions.

Lawmakers approved the increased spending authority for both offices last month after caseloads for public defenders and prosecutors reached unprecedented levels because of court delays during the pandemic.

The increased spending authority -- along with the transfer of $1 million in state reserve funds for each office -- would allow the Public Defender Commission and prosecutor coordinator's office to hire 45 attorneys in this fiscal year and the coming fiscal year.

The coronavirus relief funds would come from the state's share of the American Rescue Plan Act, a $1.9 trillion package signed into law by President Joe Biden in March 2021 to speed the U.S.' recovery from the economic and health effects of the pandemic.

Early last month, Arkansas lawmakers were unsure if the state could use the federal funds to cover the salaries of additional attorneys. But they recognized the need to act quickly.

The backlog of cases in Arkansas courts had reached a crisis level, said state Sen. Clarke Tucker, D-Little Rock, when presenting his funding bills to the Legislature's Joint Budget Committee.

Tucker pointed to a public defender in Pulaski County who was managing 574 felony cases.

The National Advisory Commission on Criminal Justice Standards and Goals recommends that each public defender handle no more than 150 felonies per year. Legal experts have argued that even these standards, which are nearly 50 years old, may not go far enough to protect defendants' rights.

While a move to decline cases could have sparked a crisis in local courts, Bill Simpson, chief public defender, said his attorneys were bound to uphold the constitutional rights of their current clients before they could take on new defendants.

The office reversed course in late February after state officials began progressing toward a solution.

The rising number of cases in Pulaski County also strained prosecuting attorneys. By late February, the office had seen a staff attrition rate of more than 50% since September 2020, according to chief deputy prosecutor John Johnson.

In the past month, Johnson said, the office has seen a drop in attorney turnover as courts transitioned back to in-person proceedings. As of Friday, prosecutors were still working with public defenders and judges to determine how best to spend the initial funds.

"We're hopeful that our plan will both reduce the number of cases in the backlog and also help with the strain and stress on all our lawyers," Johnson said Friday.

The $2 million in state reserve funds marked a good start in addressing the backlog of cases, Gov. Asa Hutchinson said in a statement Friday. The Department of Finance and Administration will work with both the Arkansas Public Defender Commission and the prosecutor coordinator's office to determine if the agencies need additional support, he said.

To take advantage of the coronavirus relief funds, the Arkansas Public Defender Commission and the state prosecutor coordinator's office will have to submit proposals to the Arkansas American Rescue Plan Act Steering Committee, according to Walther.

Once the proposals clear the committee, Hutchinson and the Arkansas Legislative Council will have to grant their approval before state officials distribute the funding.

Print Headline: State affirms use of funds for attorneys