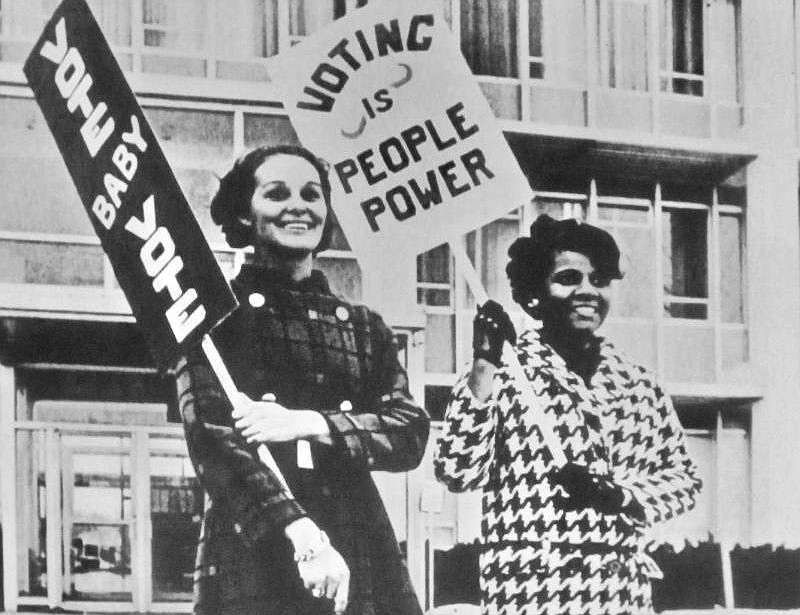 Signs encouraging women to vote have long been part of equality activism. (Special to the Democrat-Gazette/Jack Schnedler)

Gender and politics share the spotlight in the latest special exhibit at Esse Purse Museum, which continues to explore topics that go beyond the fashion accessory embedded in its name.

"Votes for All Women: The Fight for Equal Rights," on display through June 5 after opening in March during Women's History Month, traces that ongoing battle decade by decade beginning in the 1920s. Glass-front showcases pair female attire of the day with posters, photographs and other memorabilia.

A cartoon, printed around 1920 on the cusp of the 19th Amendment granting women's suffrage, depicts a half-dozen marching toddlers. Under the headline "Give Mother the Vote" are listed children's needs including "food," "health" and "play." A loosely rhyming verse rhetorically asks: "Isn't it a funny thing that fathers cannot see, Why mother ought to have a vote on how these things should be."

The year 1923 is cited for the first introduction in the U.S. Congress of the Equal Rights Amendment, a proposal brought up repeatedly without success for nearly a century and still unfulfilled. Among mentions of the continuing gender pay gap is a note that Franklin D. Roosevelt's National Recovery Administration during the Great Depression authorized lower wages in some cases for women than for men doing the same job.

Esse visitors learn that the U.S. Congress in 1917 included only one woman, Jeanette Rankin. By 1929, that number had increased to nine, including Arkansas representatives Pearl Peden Oldfield and Effiegene Locke Wingo. In 1932, Arkansan Hattie Caraway became the first woman elected to a full term in the U.S. Senate. In the current Congress, 145 of the 535 members are women — 106 of them Democrats and 39 Republicans.

Now that the United States has its first female vice president, after nearly electing its first female president in 2016, a worn campaign poster is a reminder of how those paths were slowly paved. Printed for the 1972 campaign of Shirley Chisholm, the first woman to make a serious run for the White House, it promises that she is "unbought and unbossed."

The new exhibit echoes Esse's mission, as stated on its website by founder-owner Anita Davis and director Ally Short Weaver.

"We are not simply showcasing accessories but rather making HERstory tangible and familiar. It is often the smallest details, the scribbled notes in the margins of our history that truly encompass the female experience. As our museum takes you on the journey of the 20th-century woman, it is not only the sense of nostalgia but also the sense of solidarity that you will feel."

The museum's permanent exhibit is also mainly chronological. It "honors and celebrates the progression of the 20th-century American woman — decade by decade — through the lens of her handbag and the contents within. Through the collection and artful display of this material culture, as well as with the help of photography and ephemera, ESSE provides a contemplative portrayal of the woman's struggles, accomplishments, and more sweepingly, the times in which she lived."