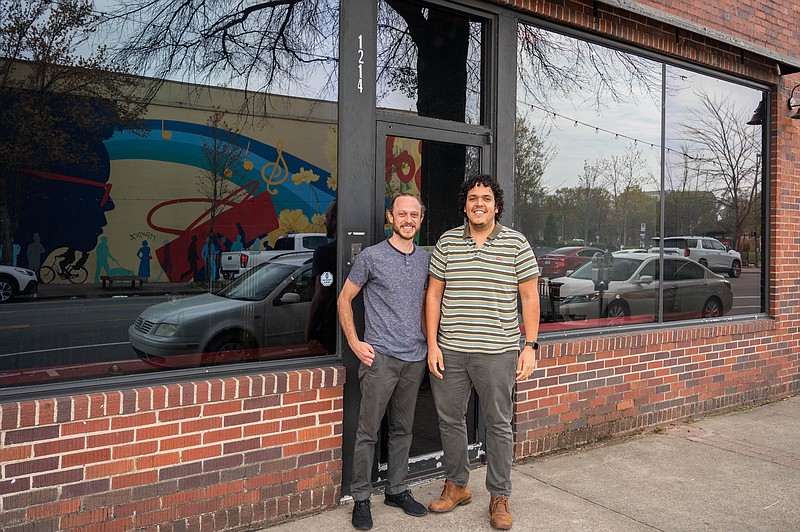 El Sur Street Food owners Luis Vasquez and Darren Strayhorn pose in front of the former Esters, 1214 Main St., in Little Rock’s SoMa neighborhood, where they have announced they will open a brick-and-mortar space this summer. (Special to the Democrat-Gazette)

El Sur Street Food owners Luis Vasquez and Darren Strayhorn, who have been serving authentic Honduran and other Latin American food out of a food trailer, are moving into the former Esters, 1214 Main St., in Little Rock's South Main neighborhood. Target to open is sometime this summer. Vasquez, a native of Honduras who was set to become a U.S. citizen this week, and Strayhorn expect to expand their menu, which currently focuses on signature baleadas (similar to El Salvadoran pupusas and Mexican-American soft tacos, grilled, thick flour or corn tortillas folded over refried black beans and white farmers cheese), tacos and arepas. The place will have "ample seating" and a full bar, according to a news release. "We have spent a lot of time with the truck in SoMa and it is an area that is home to us," Vasquez says. We are told to follow progress on El Sur's Facebook page (facebook.com/elsurstreetfoodco) and Instagram (instagram.com/elsurstreetfoodco). Oh, and don't confuse, as we did initially, El Sur with Tren al Sur, a Venezuelan food truck that also specializes in arepas.

So this is for real: The long-awaited Whataburger outlet at 49 U.S. 79 North in Magnolia opened March 31, a couple of weeks earlier than a mid-April estimate previously provided by Brian Gingrass, the San Antonio-based chain's regional manager. It features "a state-of-the-art kitchen, double drive-thru lanes and an open dining room," according to a news release; inside, a custom-made mural depicts Magnolia landmarks, including Southern Arkansas University and Magnolia High School. It's open 24/7 for dine-in, carry-out and drive-thru service, with self-serve kiosks. The phone number is (870) 626-4263. Whataburger has two locations in Fayetteville and one each in Rogers, Springdale and Texarkana (but not one in Russellville, where Feltner's Whatta-burger is not connected in any way to the chain).

And this one was an April Fool's joke: an "exclusive" from a web outlet called #FunTV that surfaced Friday on Facebook (with emendations hither and yon), and all of it — except the mention of the Magnolia outlet, which, of course, is for real — spurious, fake and untrue (and with lousy punctuation):

"Whataburger President & CEO, Ed Nelson has confirmed to #FunTV it's plans to open four more Whataburger locations in Arkansas. The decision was made after an overwhelming response from you, our viewers, to Wednesday's article on the opening of the newest Whataburger location in Magnolia, Arkansas on Thursday, March 31st.

"In an exclusive interview only to #FunTV, Nelson said he is grateful for the enthusiasm Arkansans have for the Texas-based food chain and he sees a definite market for it's burgers in Arkansas. ... Nelson confirmed the company's intent to open locations in Arkansas in the following cities: Little Rock, Jonesboro, Pine Bluff, and Fort Smith. Nelson said in a phone interview with #FunTV that further consumer demands in Arkansas will determine whether the company expands to more locations throughout the State of Arkansas. ...

"Construction of the next Whataburger location is said to begin June 2022 in Little Rock at a former site owned by a previous restaurant that was built a few years ago on 1.40 acres. Whataburger purchased the property yesterday for $2,795,000, which is $536,000 less than the asking price of $3,331,000. Nelson said it was a smart move for the company since the property was already a food chain restaurant. He said customers can expect that location to open by August 1st."

Other versions of this pinpointed the location as the DQ at 12th Street and University Avenue, which, by the way, has not closed, nor are there any plans by franchisee You Scream Holdings, LLC to sell it or turn it into a Whataburger. Nor are there any plans, at least current ones, to open Whataburger outlets in Pine Bluff, Jonesboro or Fort Smith.

We spent all day Friday and even into the weekend stomping on this one. Sorry, Whataburger fans who fell for it.

The Toasted Yolk Cafe, a Houston-based, brunch-centered chain and franchise operation, has announced, via Facebook (facebook.com/TheToastedYolk), 10 new locations opening "this Spring & Summer!!" across the South, including one in Little Rock. The website, thetoastedyolk.com (where you can also check out the menu), confirms that a "Little Rock, AR" location is "Coming Soon," but does not, as it does with several other pending locations, list a street address. However, one of our eagle-eyed correspondents tells us food blog The Mighty Rib reports it's going into the 17000 block of Chenal Parkway, across from the Promenade on Chenal. The chain suggests you watch its social media outlets "for grand opening dates and event info."

Speaking of brunch franchises, we're awaiting an update from Ben Brainard on the progress of Little Rock's first Big Bad Breakfast, in the former Arvest Bank building at West Markham Street and Bowman Road, behind David's Burgers, which originally had a target opening for "early 2022." On its website, bigbadbreakfast.com, the Birmingham, Ala.-based chain still lists Little Rock as "coming soon."

And speaking of chains and the Promenade at Chenal, Little Rock's first Sullivan's Steakhouse is set to open today on schedule in the former Del Frisco's Grille, 17707 Chenal Parkway. Hours are 11 a.m.-10 p.m. Sunday-Thursday, 11 a.m.-11 p.m. Friday-Saturday. The phone number is (501) 817-3971. sullivanssteakhouse.com.

And speaking of coffee shops, we have confirmed that The Good News, "coming soon" to the Promenade at Chenal, 17711 Chenal Parkway, Little Rock, will in fact be a purveyor of coffee. The shopping center website page, chenalshopping.com/merchants/the-good-news, carries a logo that proclaims "Great Coffee and Good Vibes." No timeline on when we can expect it to be open, or contact information where we can find out.