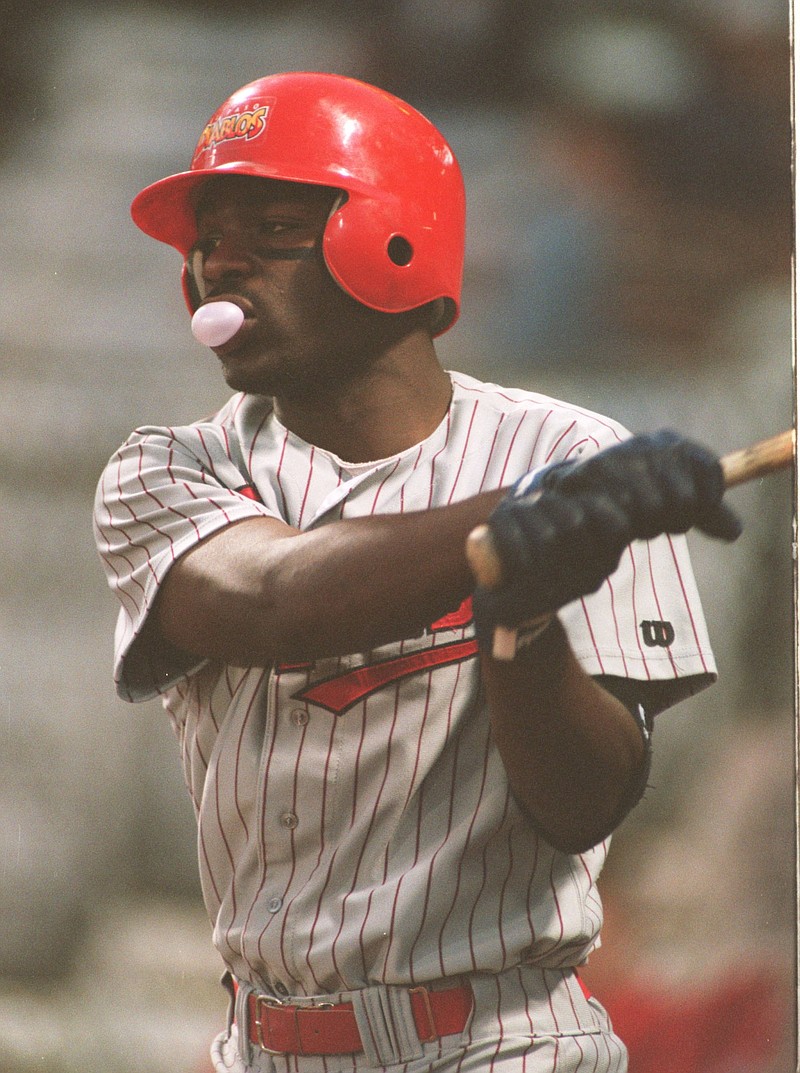 Basil Shabazz, shown with the El Paso Diablos minor-league baseball team in 1995, earned All-American honors in football, baseball and track and field while at Pine Bluff High School. Before playing football at the University of Arkansas at Pine Bluff, he spent five seasons playing baseball in the St. Louis Cardinals and Milwaukee Brewers organizations. On Friday night, he will be inducted into the Arkansas Sports Hall of Fame. (Democrat-Gazette file photo)

The ninth in a series of 2022 class of inductees for the Arkansas Sports Hall of Fame.

For as many globally renowned athletes as are synonymous with success and can instantly draw a reaction from anyone just by having their last names uttered -- think Jordan, Ruth and Serena -- there's one Arkansan, in particular, who seemingly has a similar kind of effect.

In a state chock-full of athletes who've gained legendary status for an abundance of reasons, especially when it pertained to their performances when the stakes were at their highest, it may be hard-pressed to find anyone who shined brighter than Shabazz, who'll be ushered into the Arkansas Sports Hall of Fame on Friday during an induction banquet at the Statehouse Convention Center in Little Rock.

"Man, it's an honor, it truly is," Shabazz, 50, said. "I'm very humbled by it, and I think the City of Pine Bluff deserves it just as well. The mentality in PB has always been one for all and all for one.

"Some things may be going on there nowadays that you can't control, and that's anywhere. But at the same time, the memories I have growing up in my hometown are great."

"Great" is generally how Shabazz is characterized whenever and wherever he's brought up in conversations that center around the some of the state's best to ever don an athletic uniform.

The former four-sport athlete earned all-state honors in football, basketball, baseball and track and field for the Zebras and put up a jaw-dropping 1990-91 school year that saw him rack up honor after honor that extended far beyond state lines.

After rushing for nearly 1,600 yards and 28 touchdowns, including five in a memorizing performance during Pine Bluff's 33-13 victory over Texarkana in the Class AAAA state title game as a senior, the then 6-1, 200-pound tailback was named as an All-American as well as the Gatorade National High School Football Player of the Year. A few months later, he would be chosen as the Gatorade Arkansas High School Track and Field Athlete of the Year and the National High School Athlete of the Year. The latter award hasn't been given to anyone from Arkansas since.

Shabazz was later selected by the St. Louis Cardinals in the third round of the Major League Baseball Draft in 1991 and enjoyed a five-year career as a professional before returning to Pine Bluff to put together a short, but highlight-filled, two-year stint with the University of Arkansas at Pine Bluff football team.

Earning those accolades wasn't necessarily the only thing that made Shabazz a revered figure to those around the state. It's the extraordinary things he did with the talent he had that led to him becoming almost mythical in the eyes of many despite the realism that existed.

For example, the first time he ever attempted the high jump at a track and field meet resulted in a then-state record leap of 6 feet, 9 inches. There was also a story at the Meet of Champs where Shabazz stepped off the school bus only moments before running a state-record time of 20.8 seconds in the 200 meters. Additionally, the fact that he was able to become a pro baseball player regardless of playing just a partial season on the Zebras' team in his final prep year was amazing in itself, let alone him scoring special teams touchdowns at UAPB six years after he'd played an actual down of football.

"Self-confidence," said UAPB Associate Director of Athletics for Strategic Communications Cameo Stokes, who grew up watching Shabazz when he was a youngster. "He gave it all he had, whether it was on the baseball diamond, football field, basketball court or the track. One of the best athletes in the nation during the '90s. ... He represented the state of Arkansas and the City of Pine Bluff the right way."

The right way was the best way for Shabazz, who was about as self-motivated as any star athlete could be during his career. But he had a support system that enabled him to blossom into who he'd eventually become.

"Family is what drove me," he explained. "In Pine Bluff, I had a whole lot of family. I was raised and taught about family. But the thing is, you don't necessarily have to be from the same mother or same daddy to be considered family to one another. That kind of family environment made me feel really comfortable with anything that I set out to do."

Shabazz grew up with UAPB baseball Coach Carlos James as well as former 19-year major leaguer Torii Hunter in a town where sports dominated everything. That alone was enough to set Shabazz on a path to elite stardom.

According to him, there wasn't necessarily anyone that he pointed to as a measuring stick for him to get to a certain level of success. He competed against and with other city phenoms such as former University of Arkansas wide receiver Tracy Caldwell, whom he teamed with at Pine Bluff, and Carl Kidd, who went to Dollarway and later played football in both the NFL and CFL.

However, there was one man whom Shabazz credited with shaping him as not only an athlete but also a man.

"Coach [Andrew] Butler was so inspirational to me," he said of  his late former high school track and field coach, who guided the Zebras to 10 state championships over a 17-year span from 1974-90. "The way he cared for kids in Pine Bluff. It didn't matter if you were Black, white, it didn't matter. He carried himself the same way, and he made sure that we knew what was going on out there.

"That takes a lot for a man, coming up in his era, to just let us know about everything, even if his job was on the line because of it. He was just a great guy."

Greatness observed greatness, on Nov. 10, 1990, a day that Shabazz admitted was as mind-blowing as anything he's ever experienced. That was the morning that Muhammad Ali came to Pine Bluff to take part in UAPB's homecoming festivities. The ex-boxing champ and activist, who died in 2016, served as the grand marshal of the parade and later attended the football game.

"Out of everything that I thought I could give to Pine Bluff, seeing him was what really opened my eyes," Shabazz said. "I was like, 'I want to be like him.' I can't box, but I can hold my own ground, don't get me wrong. But I just saw how people drew to him, how people believed in him.

"That moment really changed the way I thought about Pine Bluff. I can't even put it into words how much watching him touched me because a lot of people looked up to me. It literally showed me that you can be a leader if you put your mind to it, and for me to just carry that torch for your city ... it was special."

Nearly 33 years after seeing one of the greatest boxers ever, Shabazz continues to carry that torch in the Dallas area through his nonprofit organization, All in One, where he works with kids to help develop skills, like speed and agility, for football, basketball and baseball.

"It starts with the mind, though," said Shabazz, who has three children with his longtime wife, Reca. "If I can get you to believe in what I'm teaching you, there's no shortage in working with you because you understand. I want them to realize that everything they're paying for doesn't cost.

"They just don't have the drive to do it. And that's where I take it upon myself to help them reach that. But the biggest thing in it all is that they've got to let God drive your car. You've got to be the passenger, and it can't be the other way around."

Shabazz at a glance

NOTEWORTHY Was a four-sport, all-Arkansas athlete in football, basketball, baseball and track and field. … Rushed for nearly 1,600 yards on the football team and hit .351 on the baseball team during his senior season in 1990-91. … Was a USA Today High School All-American in 1990. … Signed a $150,000 bonus after being taken by St. Louis in the 1991 Major League Baseball Draft. … Averaged .233 at the plate with 93 RBI, 142 stolen bases, 10 home runs and 10 triples in five seasons in minor league baseball. … Was a key piece for the University of Arkansas at Pine Bluff football team for two seasons until a neck injury against Southern in 1997 ended his career.