Bells will be ringing for Ukraine at Trinity Episcopal Cathedral 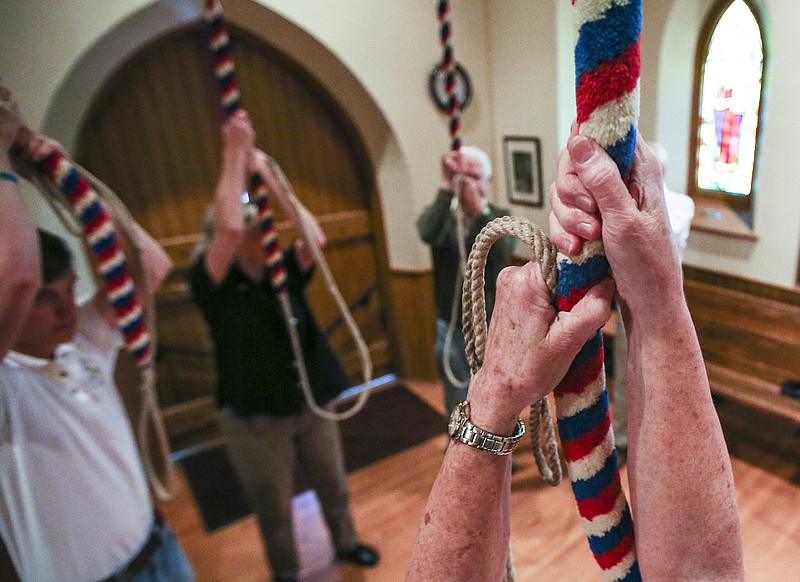 Ropes are used to ring the bells at Trinity Episcopal Church in Little Rock in this April 23, 2017, file photo. (Arkansas Democrat-Gazette file photo)

The bells at Trinity Episcopal Cathedral in Little Rock typically are utilized for weddings, funerals and as calls to worship.

Sunday morning they will ring in solidarity with the people of Ukraine.

As the massive bronze bells echo across the Quapaw Quarter, volunteers will distribute 100 or so blue and yellow Ukrainian flags, organizers said. Beneath the tower, a table will be set up to collect donations for Episcopal Relief & Development, which provides aid to Ukrainians who have been displaced or forced to leave their homeland.

A fellow bell ringer, Julie Keller, suggested ringing the bells as "a symbolic gesture of support" for the Ukrainian people, she said.

One of their colleagues, Porter Brownlee, recommended making it a fundraiser as well.

The idea was quickly embraced by the society's dozen or so members, Keller said.

Since Russia invaded its neighbor, the world has seen image after image of the devastation. Civilians gunned down, their hands tied behind their backs. Bodies left to rot in the street or tossed into unmarked graves.

"You can't watch it and not be moved by it, affected by it, infuriated by it, and you just feel helpless to do anything," Keller said.

Brownlee also has been appalled by the carnage that Russia has unleashed.

"I believe it to be a scourge, I mean, clearly the act of a deranged man," he said.

He is glad to use his talents to raise money for the victims.

"We're hoping that it will be a fairly substantial contribution that we will be able to make to assist the people of Ukraine," Brownlee said.

Installed in 1988, they were manufactured by the Whitechapel Bell Foundry, the same company that manufactured the Liberty Bell in Philadelphia and Big Ben in London.

In one sense, the bells' repertoire is limited.

On the other hand, there are many possible permutations, since the order of the eight bells can be changed over and over.

"They're not musical; they're more mathematical," Wilson said.

Swinging the bells, so that they ring when they're supposed to, is not easy, she added.

Brownlee, a Columbia University-educated engineer, is one of the original ringers. He actually traveled to England to see the bells before they made their journey to Arkansas and he helped prepare the tower for installation.

Bell ringing is "a unique musical adventure," but it's a complicated skill to master, he said.

"For middle-aged people, it usually takes six months or more just to learn how to handle the bells and then years to really become an accomplished ringer," he said.

The Trinity Episcopal Bell Ringing Society will perform at Trinity Episcopal Cathedral, 310 W. 17th Street, in Little Rock on Sunday following the 10:30 a.m. service. The event is billed as “an expression of love, unity, and support for the Ukrainian people.”