According to census records, a Japperson W. Blythe lived in Hope in 1950. But that person was really Bill Clinton, whose name was William Jefferson Blythe at the time. The National Archives and Records Administration used an “optical character recognition” technology tool to transcribe the handwritten census records, but it wasn’t always right. The public is being asked to help correct mistakes in the records. (National Archives and Records Administration)

A 3-year-old boy named Japperson W. Blythe was living in Hope in 1950, according to newly released census records.

He would grow up to be president of the United States.

That boy was actually Bill Clinton. His name at the time was William Jefferson Blythe.

A census-taker apparently reversed his first initial and middle name. And a computer transcription program turned the handwritten Jefferson into Japperson.

The digitized 1950 census records were posted online April 1 at https://1950census.archives.gov for anyone to access for free.

Census records are kept confidential for 72 years. In 1950, the United States had almost 151 million people, about half as many as today.

Those 151 million people amounted to a lot of census records -- 6.4 million scanned pages on thousands of microfilm reels.

It's a time capsule for historians and genealogists.

Arkansas' population in 1950 was already well known. From 1940, the state's population dropped 2% over a decade to 1.9 million, in large part because of the mechanization of agriculture.

But the census records released this month include information on individuals by name and residence. The records provide insight into the way our parents and grandparents lived in 1950. For instance, job descriptions were quite literal. Occupations of Arkansans included "racks balls" at a pool hall and "shakes sacks" at a feed mill.

"The 1950 census marks kind of a psychic step forward," said David Ware, 67, state historian and director of the Arkansas State Archives. "For us in the baby boomer era, the '50 census marks where the country was when we came on the scene. This is something I think in particular resonates for folks of my age group. As a baby boomer, I'm curious about my origins."

"It's emotional rather than intellectual," Ware said. "Still there is this draw. It has mysteries to it. You get the thrill of having vicarious contact with the people who were in a place on a particular day that the census enumerators came through. As of that day, this schedule preserves who lived there, how many kids they had, how they lived."

The 1950 census was the last time that enumerators went door to door, visiting people in person, to canvass the entire country.

With the 1950 census, for the first time, the federal government's National Archives and Records Administration used an "optical character recognition" technology tool to help decipher the handwritten names.

"The OCR being used to transcribe the handwritten names from the census rolls is about as good as the human eye," Project Management Director Rodney Payne said in a news release. "Some of the pages are legible, and others are difficult to decipher."

A human, however, would know that Jefferson is a much more common name than Japperson.

The National Archives is asking for editing help from the general public.

"The National Archives developed a transcription tool to enable users to submit name updates," said Payne. "This will allow other users to find specific names more easily, and it provides an opportunity for the public to help the agency share these records with the world."

Others have noticed the problem.

"I started searching the 1950 census and am disappointed at how difficult it has been to find relatives," Henry Rosenberg wrote on https://historyhub.history.gov, which has been providing a blog for the 1950 census. "Having worked on transcriptions for 3½ years, I am shocked at how badly some of the names have been butchered."

A HistoryHub administrator responded: "The draft 1950 census index was created using machine learning assisted Optical Character Recognition, which can be inaccurate due to issues such as: illegible handwriting, poor image orientation (slightly sideways), variations in image quality (light, dark, or poor contrast), text obscured by handwritten flourishes from letters on the line above or below, different handwriting styles, and because surnames [were] written only on the line for the head of household and other persons in the household with a different surname."

Still, the 1950 census is "so much more user friendly than it has ever been," said Alison Wright, division head at the Arkansas Data Center.

"It helps you kind of reminisce about the past and the person who was recorded -- and not just the numbers," she said.

The 1940 census records were released a decade ago, but the federal government didn't transcribe and index the names. So the 1940 census can't be searched by name at https://1940census.archives.gov, only by location and enumeration district.

That means the 1950 census is much easier to search on the federal government's website, even if the names aren't always exact. The search engine looks for names with similar spellings. A search for Jefferson in Hempstead County, Ark., brings up Japperson W. Blythe at the top of the list.

Census records from 1940 and earlier have been transcribed and indexed and are available online through genealogy websites such as ancestry.com (for a fee) and familysearch.org.

"Locating people in historical U.S. census records (1790-1940) is easier than ever due to national indexing on popular commercial genealogy websites -- something that did not exist two decades ago," Claire Kluskens, an archivist with the National Archives, wrote on HistoryHub. "Before 1990, it was necessary to consult indexes in books or on microfilm for specific states, and to actually physically be at an archives, library or other facility that had census microfilm."

But sometimes the census-taker got it wrong. A thick accent could result in botched spelling. The 1920 census lists a man named Cheese Bologna as the head of a household in Pennsylvania. He was actually Narciso Bailoni, an immigrant from Italy, wrote Kluskens.

Japperson W. Blythe (a.k.a. Bill Clinton) was listed in the 1950 census as living with his grandparents Eldridge and Edith Cassidy at 117 S. Hervey St. in Hope. That's the address of what is now a national historic site known as the President William Jefferson Clinton Birthplace Home.

Besides Clinton, other noted Arkansans who can be found in the 1950 census include:

• Orval E. Faubus, 40, a newspaper editor in Huntsville who would be elected governor in 1954.

• David Pryor, 15, of Camden, who would serve as a page for Congressman Oren Harris in the summer of 1951 before eventually being elected governor and U.S. senator.

• J.R. Cash, 18, of Dyess, the singer and musician known as Johnny Cash. He enlisted in the U.S. Air Force in 1950 after a brief search for work in Michigan, according to the Encyclopedia of Arkansas.

• Wiley A. Branton, 26, of Pine Bluff, the civil-rights attorney who worked to end legal segregation and inequality in Arkansas and the nation.

• Charles M. Portis, 16, of Hamburg, who would write several books, including "True Grit." In 1950, he was a "special-delivery mail manager" for the post office, according to the census.

• Lavon Helm, 10, of Phillips County, the singer, musician and actor who was a member of the rock group The Band. Helm later changed the spelling of his first name to Levon. The optical character recognition tool of the 1950 census translated his name as Laron Helms.

Across the Mississippi River in Memphis, a 15-year-old Elvis Presley was living with his parents on Winchester Avenue. Elvis' father, Vernon Presley, told the census-taker that he made $1,845 in 1949. That's about $22,000 today, adjusted for inflation. In 1950, he was employed labeling and packing paint in a paint factory. The census listed his name as Verman Pressley. 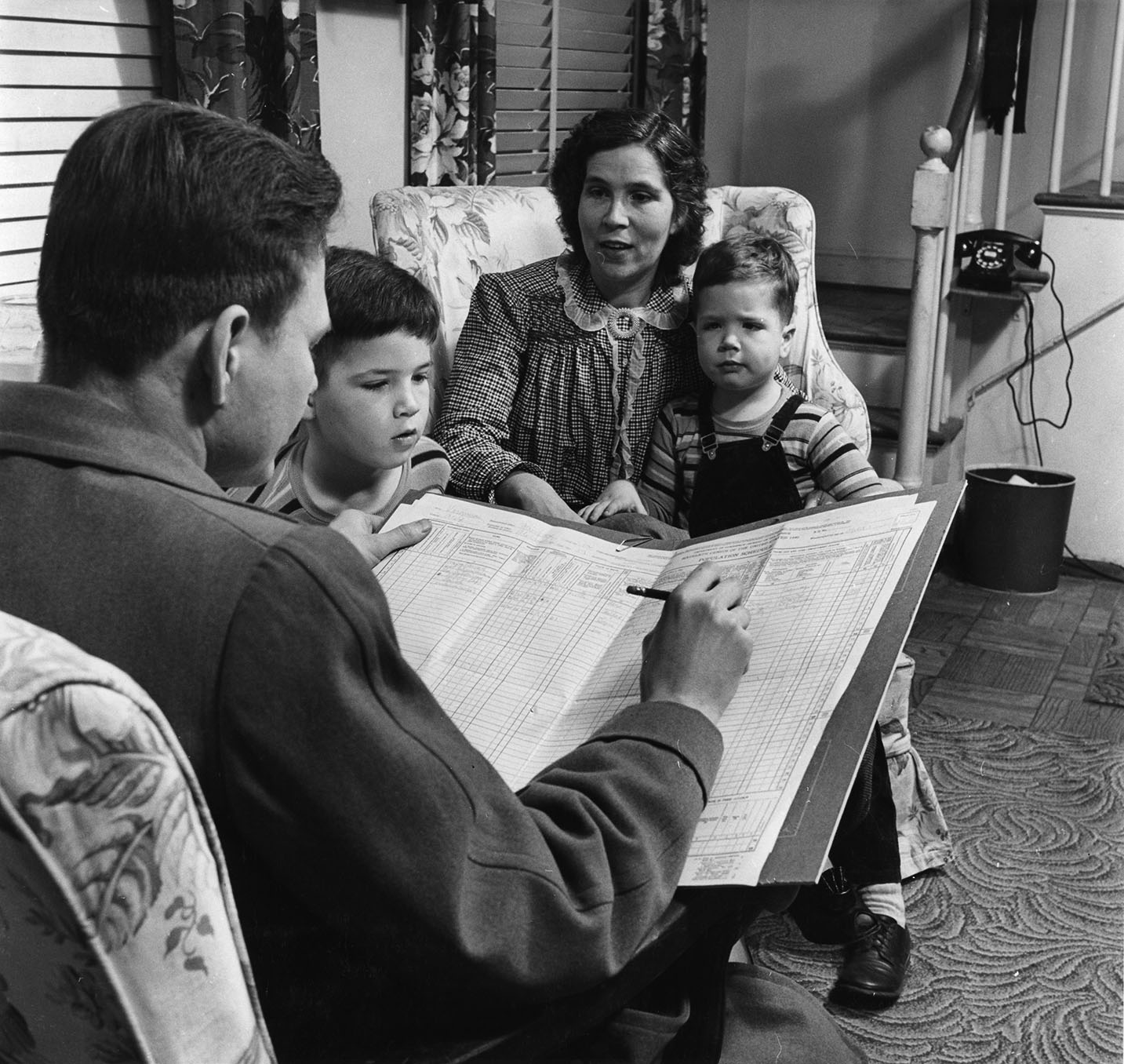 An enumerator gathers data from a Virginia woman for the 1950 census. The 1950 census records were released April 1 and are online for anyone to view at https://1950census.archives.gov. It was the last year that enumerators went door to door across the United States to gather census information. (State Department-Mottar photo)