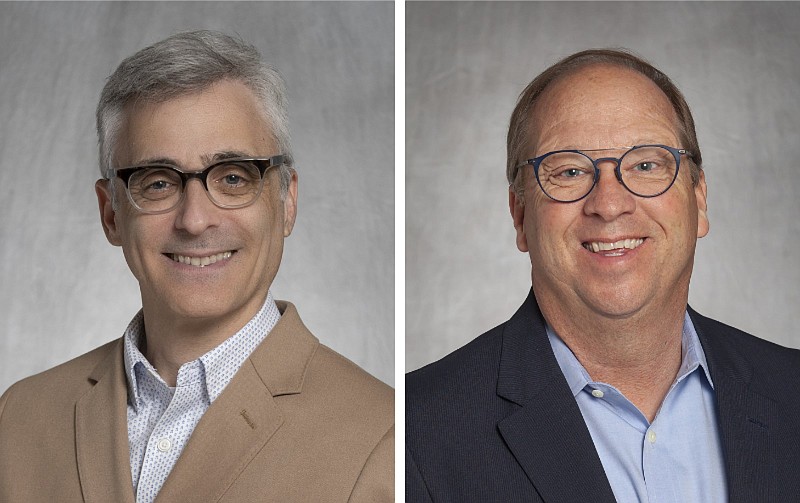 Robert Steinbuch (left), professor at the William H. Bowen School of Law at the University of Arkansas at Little Rock, and Jon Wickliffe, director of business development in Arkansas for Vantage Health Plans, are shown in this undated combination photo. The two are running in the Republican primary in state House District 73.

A self-described moderate Republican who is on the Arkansas Economic Development Commission will take on a self-described conservative law professor and government transparency advocate who wants to eliminate "corporate welfare" in the GOP primary for a House seat in Little Rock next month.

The May 24 race pits Robert Steinbuch, professor at the William H. Bowen School of Law at the University of Arkansas at Little Rock, against Jon Wickliffe, director of business development in Arkansas for Vantage Health Plans.

The winner will face incumbent Democratic state Rep. Andrew Collins of Little Rock in the general election in November.

House District 73 encompasses the Riverdale area and stretches west to include Cammack Village and the Heights, River Mountain and Pleasant Valley neighborhoods, as well as part of west Little Rock.

All 100 House districts were redrawn last year after the 2020 U.S. census, so some of the neighborhoods Collins previously represented were shifted to other districts while others were moved into the district.

Steinbuch is a described himself as a conservative Republican, while Wickliffe said he is a moderate Republican.

"I like to listen to all sides and different viewpoints and work with others," Wickliffe said.

Steinbuch criticized Wickliffe for voting in the Democratic primary in 2020 and for saying on his website that the race isn't about partisan politics.

Steinbuch voted in the Republican primary in 2020, secretary of state records show. While the secretary of state's office provided voting history for Steinbuch going back to the 2008 general election, the 2020 primary was the only race for which Steinbuch indicated a party.

Wickliffe said he didn't remember the 2010 primary, but in 2020 he had a friend running for justice of the peace whom he wanted to support in the primary.

"I didn't feel like [former President Donald] Trump was going to lose the primary in Arkansas and of course I support the Republicans in Arkansas," he said. "I'm a big supporter of the Republican Party."

Republican Gov. Asa Hutchinson, who is term-limited and will leave the office in January 2023, has endorsed Wickliffe in the race. Hutchinson said in a video from Wickliffe's campaign kickoff posted on Facebook that Wickliffe is engaged politically and supports good candidates.

"He is a strong candidate and will really help us in the Legislature but also he's got a tough district and a tough campaign ahead of him," Hutchinson said. "You're going to win because you're going to work, because you've got a great team."

Wickliffe, 54, attended Oak Grove High School in North Little Rock and earned a degree in criminal justice from the University of Arkansas at Little Rock. He worked for the Jeffrey Sand Co., ultimately as superintendent of the Conway location, before going into pharmaceutical sales from 1999 to 2021. He served on the Little Rock Port Authority Board for 19 years starting in 1999. Hutchinson appointed him to the Arkansas Economic Development Commission in 2019. He has two children.

Steinbuch, 54, said he has lived in Little Rock for about 20 years and previously worked as legal counsel for the U.S. Senate Judiciary Committee and the U.S. Department of Justice before going into teaching. Originally from New York, he earned a bachelor's degree and a master's degree from the University of Pennsylvania and graduated from Columbia Law School.

Steinbuch now advises and helps draft bills for about 20 Republican state legislators in a volunteer capacity and represents Arkansans for free in what he considers public interest litigation, he said.

Those cases have included a defamation case on behalf of two teachers from Jonesboro who were accused of wrongdoing because they were in Washington, D.C., on the day of the Jan. 6, 2021, attack on the U.S. Capitol as well as cases that he said seek to clarify ambiguity about carrying guns in city and county buildings.

Asked about his opponent, Wickliffe said Steinbuch seems to want to find the negative in the state, while he wants to see the good in Arkansas.

"I'm at my best when I'm helping others and that's what I want to do," Wickliffe said. "He likes to sue people for free."

Steinbuch has also been the plaintiff himself. In 2015, he sued his current employer for violating the Arkansas Freedom of Information Act for refusing to give him seven years' worth of test scores, grades and bar exam scores with a breakdown on graduates of the Bowen School of Law by gender and race.

Administrators said fulfilling the request could violate the privacy rights of minority-group students; Steinbuch said he was studying law school admissions policies and questioned whether the law school was accepting adequately prepared students. The case was ultimately booted from federal court to state court, where the university's motion to dismiss the Steinbuch's appeal for lack of jurisdiction was granted.

The attorney also sued a former girlfriend in a 2005 invasion-of-privacy case over her onetime blog, which included sexually explicit details of her encounters with various men in Washington, D.C.

In the suit, Steinbuch said it was clear he was one of the men she wrote about though she didn't use his full name. The lawsuit and a subsequent case stemming from the woman's novel that covered the same topic and HBO's acquiring of an option for a TV series based on it were ultimately dismissed.

Steinbuch said he is in favor of lowering the state income tax and would support eventually eliminating it entirely.

"We pay too much in taxes all across the board," he said.

He said he supports smaller government, and the Arkansas Economic Development Commission where Wickliffe has a leadership role, is prime among the things he would cut.

"That's cronyism and corruption and that needs to be eliminated, and I am willing to cut and cut because government's too big," he said. "We need to have government focused on its primary obligations, like I said, safety and security, and decreasing other things."

Wickliffe said he thinks Arkansas has done a great job, especially throughout the pandemic, of making sure the state is in the race for jobs. He said he supports increasing incentives and reducing taxes for businesses.

As far as reducing or eliminating the state's income tax, Wickliffe said he needed to look into the issue more and didn't have a position on it as of last week, though he said anytime the state can reduce taxes "that helps everyone."

"I think it needs to be looked at. I think there's a lot of moving parts to it," he said.

Both candidates said improving public safety would be a top priority for them as a legislator, particularly addressing crime in Little Rock.

If elected, Steinbuch said he would change the jurisdiction of the Arkansas State Police so that troopers can patrol within Little Rock along with the city's police officers.

"Little Rock doesn't have enough law enforcement because the city administration has taken a hands-off approach to crime and it's devastating to hardworking citizens of District 73," he said.

He said he would also create joint task forces under the control of the state to come up with approaches that address areas that have significant increases in crime like Little Rock. Steinbuch said he worked on similar issues while counsel for the Senate Judiciary Committee.

Wickliffe said he wants to keep Little Rock safe by working with the court system and law enforcement to make sure the laws are enforced and to stop people who have committed crimes from committing other crimes.

In September, Wickliffe was cited for having a loaded gun in his carry-on bag while going through security at Bill and Hillary Clinton National Airport/Adams Field, according to a Little Rock police report. He said he mistakenly grabbed a backpack that was in his closet where the pistol was hidden before leaving for the airport.

Wickliffe said it was an embarrassing mistake and that he "absolutely" advocates responsible gun ownership.

"I was mortified," he said. "I've got my concealed weapons permit and that was just a simple mistake, and of course I do believe in responsible gun ownership."

He said there needs to be enough funding for public schools to remain an option, but that he believes people should be able to choose between public and private schools and that voucher programs provide a service.

Wickliffe said he is a big supporter of public schools and would have to hear more about voucher programs, but is for parents being able to choose what's best for their children.

He said he supports increasing pay for public school teachers but didn't have a specific rate in mind.

Both candidates said they are pro-life.

Wickliffe said his heart goes out to mothers who are in situations where they are considering abortion and that he understands exceptions for health of the mother and pregnancies resulting from rape and incest, but would have to look at the specifics of any proposed legislation before deciding whether he would support it.

Steinbuch said he is for banning abortions in circumstances other than when the life of the mother is at risk, without exemptions for pregnancies resulting from rape or incest.

According to his most recent monthly campaign finance report, Wickliffe had raised $21,325 toward his primary bid and spent $5,750.05, leaving a balance of $16,574 at the end of February.

Early voting in the primary election begins May 9. The deadline to register to vote in that election is April 25.