Suspected tornadoes hit Arkansas, but no reports of injuries 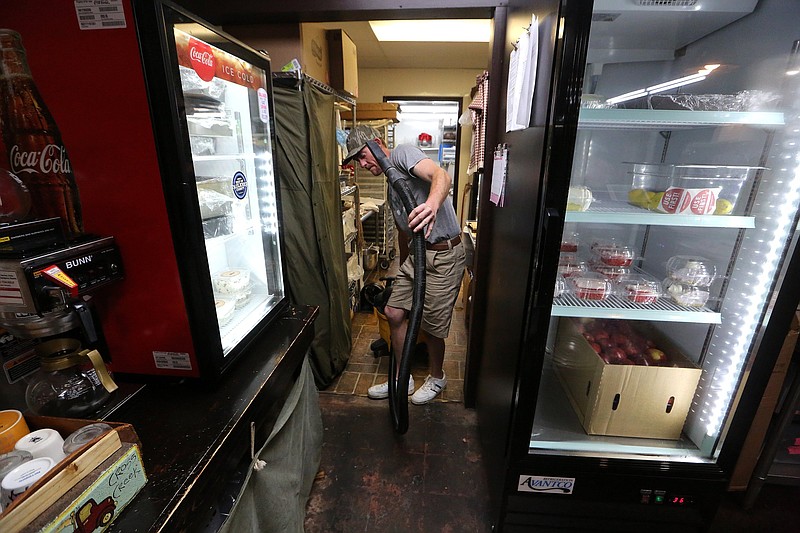 Derek Bailey, co-owner of Cross Creek Sandwich shop, pulls a wet-vac through the restaurant while vacuuming up flood damage after heavy rains on Monday night, April 11, 2022, in downtown Conway. Bailey said they got about two inches of water in the restaurant, but got it cleaned up and plan to be open on Tuesday. (Arkansas Democrat-Gazette/Thomas Metthe)

Suspected tornadoes, hail and high winds stretched across much of Arkansas on Monday, causing minor structural damage, flash flooding and power failures, but no injuries were reported as of late evening, according to weather and emergency officials.

Just after 8 p.m., as sirens blared in parts of Little Rock, a suspected tornado caused minor damage between Mayflower and Cato in Faulkner County, according to John Lewis of the National Weather Service. The tornado was observed by Little Rock Air Force Base, according to a weather service log.

The base later tweeted that there was no major damage observed on its grounds as of late Monday. The tweet said the base would continue to assess the situation.

David Christopher and his family had less than a minute to prepare after tornado sirens sounded near Dam Road in Mayflower.

"Our warnings were going basically at the same time it was occurring,'' he said.

After looking outside, Christopher piled his three children into a bathtub and waited out the storm.

Christopher said his home seemed unscathed, but the storm caused some damage to his cars.

"We are just thankful that nobody was hurt," Baker said.

There were power outages in Cato and Mayflower, he said. He also knew of windows being blown out of a house from large hail and high winds.

The National Weather Service reported that hail throughout the state was as large as 4.5 inches in Logan County, 3 inches in Franklin County and 2.75 inches in Faulkner County.

Faulkner County Sheriff Tim Ryals said some power lines were snapped, but there were no reports of major damage to homes. He also didn't know of any injuries.

The University of Central Arkansas in Conway canceled classes for today because of power outages and isolated flooding on campus, the university said Monday night in a message on Twitter.

Business owners in downtown Conway also rushed to clean water out of their storefronts.

Derek Bailey and his wife had just signed papers to take over ownership for the Cross Creek Sandwich shop last week.

The family lives in Warsaw, where a storm with possible tornadoes passed over Monday. Bailey, his pregnant wife and young daughter hid in a hallway until it passed. Not long after the sirens stopped, they received a phone call that their business was flooding.

"With the help of many different people, we were able to get the water under control," Bailey said.

He said the Fire Department, an insurance agent, church members and friends helped the family move the water out of the restaurant. Bailey was on his way home about 11 p.m. to catch some sleep before a 4 a.m. wake-up for his job.

Pulaski County sheriff's office Lt. Cody Burk said there was some minor damage and tree limbs down at Batesville Pike and Watson Road. He said a limb took down a power line in the area.

Limbs also were reported down in Lonoke County, but there were no reports of serious damage.

A storm chaser near Charleston reported the first tornado of the night at about 5:45 p.m. The roof was blown off a barn in the area near Charleston where the suspected tornado touched down, Lewis said.

A second possible tornado was spotted at about 7:32 p.m. near Scranton in Logan County. It was reported to the weather service by Logan County Emergency Management.

Damage was reported near Scranton and went in a straight line for several miles, a post from the Logan County sheriff's office states. Deputies saw damaged houses, barns, fences and trees down Monday night. The post also said there were no injuries.

"The Scranton Fire Department, Scranton city officials, neighbors, friends, etc. were out cutting and removing trees from roads and houses and checking on people," the post states. "It was great to see them at work."

In eastern Arkansas, Crittenden County reported 205 customers without power, and 110 in St. Francis County were without power.

Print Headline: Tornadoes suspected to hit state, but no one is injured