Rep zeroes in on LR for ‘Into the Woods’ musical 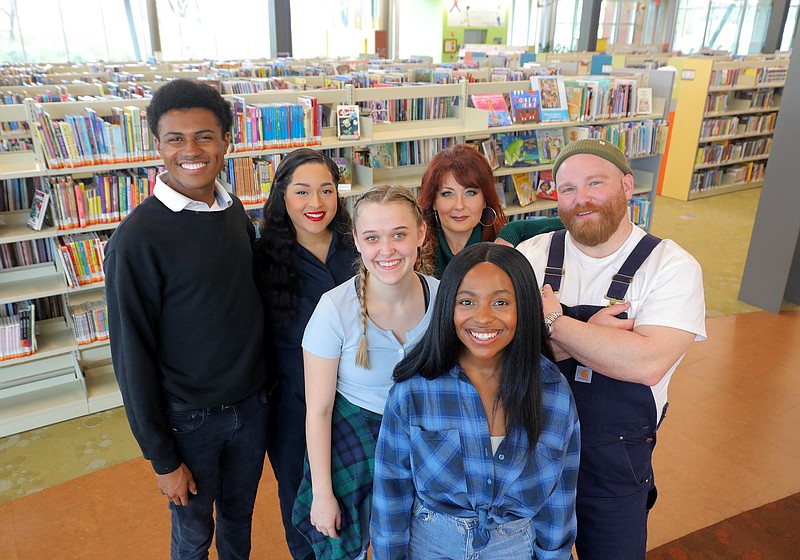 Headed “Into the Woods” (or, for the moment, the Hillary Rodham Clinton Children’s Library & Learning Center): Principal players (from left) William Romain as Jack, Ximone Rose as the Baker’s Wife, Annslee Clay as “Little Red Ridinghood,” Miranda Jane as the Witch, Erica Durham as Cinderella and Jacob Keith Watson as the Baker. The show opens for previews Tuesday and runs through May 8 at the Arkansas Repertory Theatre. (Special to the Democrat-Gazette/Stephen Thornton)

The Arkansas Repertory Theatre is going “local” for its production of “Into the Woods,” says cast member Miranda Jane.

“You could bus-and-truck this show to anywhere and it would still be ‘legible,’” says Jane, who plays the Witch in Stephen Sondheim’s fairy-tale-focused musical, “but it’s very connected to this locale; it’s so anchored in Little Rock life. That was a specific effort by the creative and design team.”

That “local” focus includes former Arkansas and U.S. first lady (and former U.S. senator and secretary of state) Hillary Rodham Clinton doing a voice-over as the Giant in the second act. (That stirred up a flurry of local and national interest when the casting was revealed earlier this month.) And using the Little Rock children’s library named for her as the site for a set of publicity photos.

And it includes director Addie Gorlin-Han using a preponderance of actors who are local or who, having come from Arkansas, have made their careers elsewhere, in her cast. Arkansas-connected folks serve as music director (Michael Rice) and choreographer (Dorse Brown).

That’s the premise behind “Into the Woods,” which opens for previews Tuesday and runs through May 8 at the Rep.

The first act follows a Baker (Jacob Keith Watson) and his wife (Ximone Rose) seeking to end a curse of childlessness put on them by the witch next door. Cinderella (Erica Durham) desperately seeks to attend the prince’s ball, despite the opposition of her nasty stepmother (Satia Spencer) and even nastier stepsisters (Hannah Fairman and Bridget Davis).

Little Red Ridinghood (Annslee Clay) seeks to takes a basket of goodies to her grandmother (Judy Trice) while a Wolf (Cooper Grodin) seeks to devour them both. And Jack (William Romain), who because of his and his mother’s (Mimi Bessette) extreme poverty faces having to sell his beloved cow, Milky White (Jacob Rivera), does so for a handful of magic beans … which subsequently creates a stratospheric encounter with an angry giant.

All turns out well — right up to the end of the first act. After intermission, however, the consequences come home to roost. The Giant’s wife (voice of Clinton) comes down a second beanstalk seeking revenge, with devastating results to the community. Cinderella’s prince (Grodin again) turns out to be charming — but not exactly faithful. And for the Bakers, having a baby is not all it’s cracked up to be.

“Anything can happen in the woods,” as the lyric goes, and, Jane explains, “everybody gets what they want — but, as Cinderella’s mother says at the top, be careful what you wish for.”

Rose, who appeared on Broadway in “Once on This Island,” says her biggest challenge as the Baker’s Wife, whom the show’s creators put into several emotionally difficult situations, is “how fast some of these changes take place inside me. That happens a lot for her. Everything happens so quickly.”

Many of the characters (the ones that survive) go through some kind of transformation — that’s the nature of theater. But for the Witch, Jane says, “her personality doesn’t change as much as [does] her physical appearance. You see a transformation on the outside, but you don’t see so much on the inside. She ends up pretty much in the same place. It’s ‘you’re not getting it’ at the beginning. By the end of her arc, it’s ‘You’re still not getting it.’”

Jane, who made a splash playing Suzanne Sugarbaker in “Designing Women” at the Rep earlier this year and who teaches at Episcopal Collegiate School, is an “Into the Woods” veteran. She played Lucinda, one of the stepsisters, in a production at the University of Arkansas at Little Rock in the late 1990s. Spencer played one of the stepsisters in a Praeclara production at Wildwood Park for the Arts in 2018. Watson played the Wolf in high school. Clay, though she has not done this show, is fresh off a production of Sondheim’s “A Little Night Music” at the Argenta Community Theater.

The Narrator, for example, whom librettist James Lapine doubles with a mysterious character called The Mysterious Man, is by that definition usually male; Gorlin-Han, however, separates the characters, casting actor-author Monica Clark-Robinson as the Narrator, with Aidan O’Reilly as the Mysterious Man.

It’s a homecoming of sorts for Watson. He grew up in Wynne and attended Ouachita Baptist University before heading to New York to make a career as an actor (his Broadway credits include “Carousel,” “Hello, Dolly!,” “Violet, Amelie,” and “The Phantom of the Opera”).

Romain, a senior at Little Rock Central High School whose Rep credits include the roles of Matt in “The Fantasticks in Concert,” Mr. Bucket in “Willy Wonka Jr.” and Schroeder in “A Charlie Brown Christmas,” says the amount of singing he has is his biggest challenge as Jack. And, “There’s an arc that Jack has; the challenge is presenting it well, while remaining true to the character — and true to myself. He’s looking to do whatever it takes to get out of the space he is in right now,” up to and including trading it for a fantasy world.

That singing includes Jack’s showpiece song, “Giants in the Sky,” a complex number with a considerable amount of patter. Romain’s co-stars say he’s crushing it in rehearsal, and adorably in the process. “That’s 90% William, 10% dimple,” Rose quips.

CORRECTION: This story has been updated to reflect changes in the Rep's covid policies.