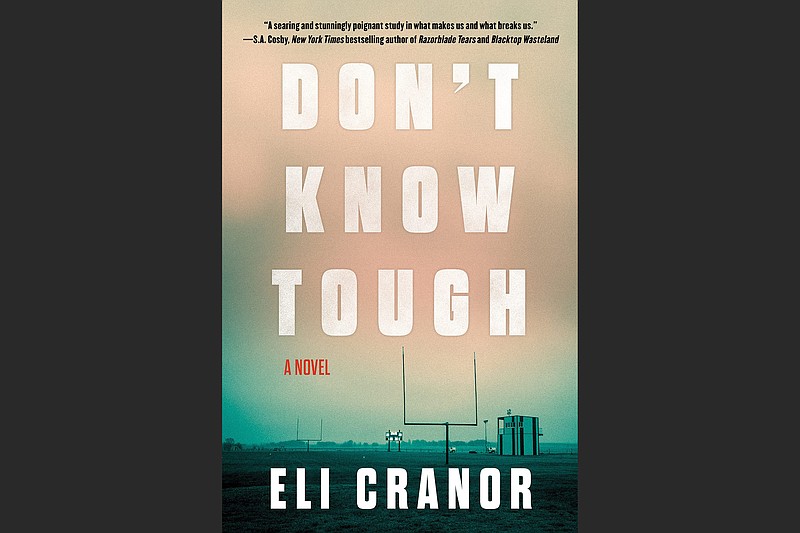 The jock turned writer is not quite a cliche, though it seems to happen often enough.

Samuel Beckett boxed as a light heavyweight; he was a competitive swimmer and rugby scrum halfback. He enjoyed the distinction of being the only Nobel laureate to have played cricket at its highest level. (He was a sweet-swinging lefty as well as a bowler — an all-rounder.)

Ken Kesey was the best high school wrestler in the Pacific Northwest. Jim Carroll was an all-city basketball player in New York City who allegedly played street ball with Lew Alcindor, the future Kareem Abdul-Jabbar (who remembers Carroll as a "seriously great poet and tremendous writer").

Then there are the athletes who can really write. Before Jim Bouton's "Ball Four" there was Jim Brosnan's "The Long Season." Pat Jordan's "The False Spring" might be the best book ever written by a pitcher. Former outfielder Doug Glanville can write. So can the aforementioned Jabbar.

So can Eli Cranor.

WHO IS ELI CRANOR?

Cranor was a 6-foot-2-inch, 176-pound quarterback at Russellville High. He signed to play college ball with Florida Atlantic and spent a redshirt year under legendary coach Howard Schnellenberger before transferring to Ouachita Baptist, where he set single-season passing and total offense records for the Tigers in 2010.

After that, he went pro, signing with the Carlstad Crusaders in Karlstad, Sweden. He promptly led them to the 2011 Swedish National Championship, throwing for two touchdowns and rushing for one other in the championship game. He was named Most Valuable Player of the league.

Then he got married. He thought about law school but missed the deadline for taking the Law School Admission Test. He took a job as offensive coordinator at Arkadelphia High School, then a couple of years later became head coach at Clarksville — and decided coaching high school football wasn't for him, at least not then. He scaled back, took a job as an assistant and began to write. He had a daughter on the way. He didn't want to spend his kid's childhood in a fieldhouse.

I've come across some of Cranor's writing over the years. Johnny Wink, one of Cranor's professors, used to send me some of Cranor's newspaper work. I've never seen the children's books he has published but read his life advice columns in the Joplin (Missouri) Globe. They were nice — one of those words you never want to hear your work described as.

But I mean it; Cranor understands the importance of rhythm and mouthfeel and there is a calm authority in his voice. Most of all he understands the necessity of absolute honesty, which is precisely the opposite of "pretension" (a word that has devolved into a general term of obliteration that some people reflexively employ when they encounter a challenge).

But that didn't prepare me for Cranor's first grown-up novel, "Don't Know Tough" (SoHo Crime, $24.95). It's artistically ambitious, a page-turner set in the fictional but highly recognizable Arkansas River Valley town of Denton, driven mainly by the interior monologues of a couple of thwarted young men: a gifted high school football player and an earnest but increasingly desperate coach who needs to save him.

Billy Lowe is a viciously talented back with little to no impulse control. He lives in a trailer park with his meth addict mom, his baby brother and his mom's abusive, no-count boyfriend who lives vicariously through Billy while terrorizing him.

Billy takes out his aggression on the field, but when a privileged and soft sophomore linebacker looks at him wrong during a one-on-one tackling drill, Billy's response is savage, probably criminal. This leads to a suspension, which endangers the Denton Pirates' playoff chances. Which, in small-town Arkansas, can be a very big deal.

Trent Powers, the coach, understands the importance of Billy to the team, and the team's importance to the town. And Trent needs to win to gain credibility (he's a hybrid-driving California transplant deep in the jungles of Arkansas) and put his stalled career back on track.

But his Christian faith also compels him to rescue Billy from squalor and broaden his horizons. Billy doesn't quite realize it, but with a few well-placed phone calls to the right connections, he could play college football; he could escape the muggy gravity of his hometown that has dragged down all his relatives. Billy could become a solid, tax-paying citizen.

So maybe the slap-on-the-wrist suspension is the best deal; Billy can apologize and sit out a half. But he'll play when they need him to play — and the Pirates will win and move on and Billy's future won't be entirely foreclosed. It's a compromise Trent needs to work.

Then Billy's tormentor is found dead in the trailer, and Billy is the prime suspect.

It's a serviceable setup to an inquiry into small-town mores and the politics of high school football; Cranor has plenty of experience to draw upon. But what's remarkable is not the mechanics of the murder mystery but the voices of the two primary characters — one a near-feral knot of fury and instinct, the other a chastened adult who remembers how it felt to be a near-feral knot of fury and instinct and how, with help, he overcame his inner Caliban.

Cranor has a great ear and empathy enough to make us care about these characters, no matter how repellent, duplicitous or self-defeating their actions are. In that regard, he puts me in mind of Larry Brown, the great Mississippi writer who never condescended to the flawed and sometimes pathological characters he wrote about.

From what I've read, Cranor admires Elmore Leonard. You can detect some of the master's matter-of-factness in the way he goes about constructing and delivering the story. It reads quickly — you can get through it in an evening or two. But it lingers, in a way that most violent thrillers don't.

I've made no secret of my admiration for Lee Child's Jack Reacher books, which bore through the brain like a Teflon-coated bullet, but I don't remember much about them a week later.

"Don't Know Tough" is of a slower, softer caliber. It gets inside you and rattles around. There is no exit wound.

And Eli Cranor isn't a curiosity; he's a fine novelist.