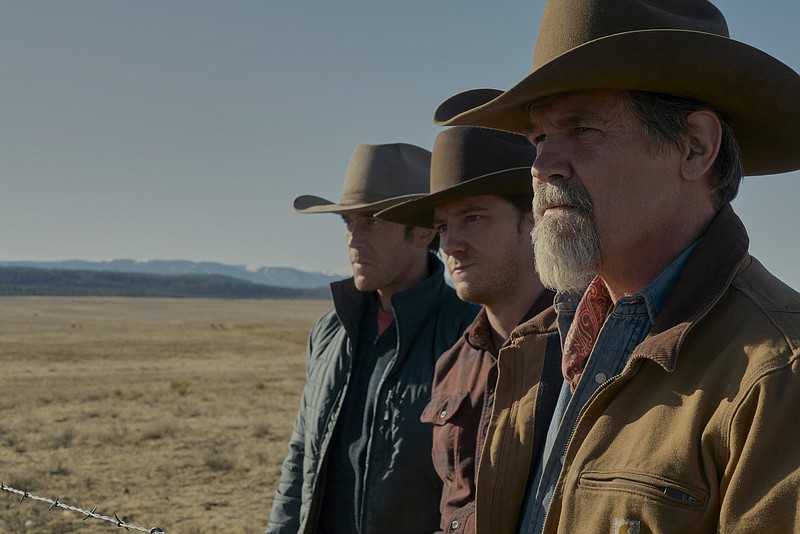 LOS ANGELES — Josh Brolin grew up on California's central coast knowing men like Royal Abbott, the laconic and emotionally distant rancher he plays in "Outer Range." The actor is glad he's not one of them.

"They're their own people. They're very loyal and helpful neighbors, but really they like their own space," he said. For Royal, the misguided belief that he's protecting his family by "the very selfish act of not wanting to talk about things" is what threatens them.

Brolin, a husband and father of four, says he's so open with his family that he's "Jell-O." But he was intrigued by Royal and the series' approach to a core element of modern Western mythology. "Outer Range" debuted Friday on Amazon's Prime Video streaming service.

"I like behaviorally being able to delve into (the consequences of) something that's been so lauded for so long ... the Marlboro man, being the last great cowboy," the actor said.

He was also taken by the Wyoming-set drama's hybrid nature, combining a "supernatural, metaphysical aspect" and a classic trope, a family's fight to keep its land.

Series creator and executive producer Brian Watkins says Brolin was the perfect fit for the role of a man who is keeping "an unfathomable secret."

"In watching his performance you can always see that secret simmering deep within, tearing him apart inside, which speaks to Josh's remarkable ability to craft such nuanced behavior in every moment, both underneath and beyond what's on the page," Watkins said.

Brolin and Taylor play smartly off each other as a couple getting on with already complicated lives when outside forces intervene. He's eager to praise her, as both a highly skilled actor and "just an incredible human being."

Brolin earned an Oscar nomination for 2008's "Milk" and acclaim for his work in other films, including the George W. Bush presidential bio-pic "W." and "No Country for Old Men."

The actor was good-natured and candid in a recent interview that came at the end of a day of promotion for "Outer Range." At one point, he mentioned his initial reservations about Watkins, a playwright making his first foray into TV.

"The best thing with working with great directors is you're protected, because they know how to cut together performances, they know what to throw in the trash. They know about the clearest line of storytelling," Brolin said.

He hadn't seen Watkins' plays, which include "Evergreens," "High Plains" and "Epiphany," set to debut at New York's Lincoln Center Theater this spring. But Brolin did his homework by reading them, and found that they brought to mind his close friend, the late playwright and actor Sam Shepard.

"There's a few people, writers and films that I've always gone back to when I need inspiration, and Sam's stuff has always been that for me," Brolin said.

Royal Abbott has a granddaughter (Olive Abercrombie), not the case with Brolin. He admitted that hearing his character addressed as "Grandpa" took him aback, especially given a scene in "Dune" in which Oscar Isaac's Leto calls Brolin's Gurney "old man."

"So I got it all in one year, and I don't care. I obviously care enough to speak louder than I normally have during this interview," he says, interrupting himself with a laugh. "But, man, I'm 54. That's the deal. I don't dye my hair anymore, I don't do any of that (expletive). It just is what it is."

More concerning to Brolin is an issue he's touched on in the past: avoiding the over-weaning ego that can spring from Hollywood celebrity. He strives to avoid it in his own behavior and generally prefers not to deal with it in others — occasional and cathartic "freak-outs" excepted, he said.

He didn't seek advice from his dad, veteran actor James Brolin ("Pensacola: Wings of Gold," "Marcus Welby, M.D.") or stepmom (and multi-hyphenate) Barbra Streisand, both of whom gained fame during what Josh Brolin calls "a very different time." He can't recall discussing acting or its trappings with daughter Eden Brolin, who plays Mia in "Yellowstone."

Self-aggrandizement and its risks have also proved inspiring: He has written an untitled TV satire about what he calls "celebrity-ism" that he'd like to see come to fruition.

"Whenever you think you're at your peak or you're untouchable .... you will be humbled wildly, and it's usually a sad humbling," he said. "And I have no interest in that humbling because I want to be humble. I want to be humble already. I don't want to learn that lesson."