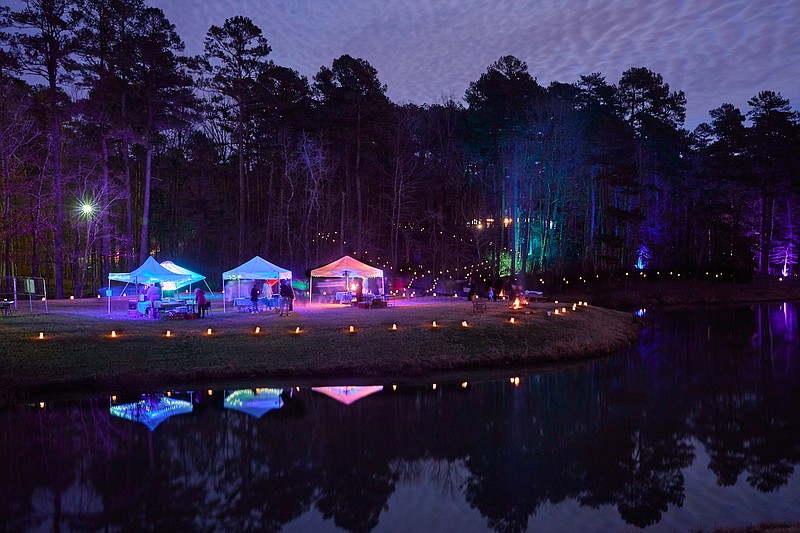 Hundreds of luminaria illuminate the grounds of Wildwood Park for the Arts in west Little Rock for "Lanterns." (Special to the Democrat-Gazette)

Visitors can travel the world by sampling food and watching performances from seven world cultures at “Lanterns,” a multicultural festival, 6-10 p.m. today-Saturday at Wildwood Park for the Arts, 20919 Denny Road, Little Rock.

Woodland paths lit with hundreds of luminarias guide guests from one “country”/”culture” — China, India, Germany, Mexico, Ireland, Canada and New York City — to the next for food, beverages, music, children’s activities and photo opportunities. Singing, dancing and martial arts performances from featured cultures will be onstage (indoors) at 7, 8 and 9 p.m. each night in the park’s Cabe Festival Theatre. Visitors can buy a floating lantern and set it adrift on the park’s central Swan Lake.

Tickets are $10, $5 for children 6-12 in advance, $12 and $7 at the gate, free for kids 5 and younger. Guests must buy WildBucks scrip at stations throughout the park to pay for food, beverages and floating lanterns. Call (501) 821-7275 or visit wildwoodpark.org. Free parking, with free shuttles to the park running every 20 minutes, is available at The Promenade at Chenal.

The covid-19 pandemic forced the Arkansas Choral Society to wait until nearly the 252nd anniversary of the birth of Ludwig van Beethoven to celebrate his 250th birthday, which it will do with a concert at 7:30 p.m. Friday in the worship center of Calvary Baptist Church, 5700 Cantrell Road, Little Rock.

The University of Arkansas at Monticello Concert Choir and soloists Mary Sandell, soprano; Aubrey Odle, alto; John Darst, tenor; and David Farwig, bass, join the Society, members of the Arkansas Symphony Orchestra and conductor Kent Skinner for Beethoven’s “Mass” in C major. The program also includes the so-called “Hallelujah” chorus from Beethoven’s oratorio “Christ on the Mount of Olives.” The orchestra opens the concert with the Overture to “The Creatures of Prometheus,” Beethoven’s only ballet. Tickets are $20, $15 for students. Visit lovetosing.org.

Bak will also solo with the Arkansas Symphony Youth Orchestra in the “Viola Concerto” by William Walton, 7 p.m. Friday at Woolly Auditorium, Arkansas School for the Blind and Visually Impaired, 2600 W. Markham St., Little Rock. Tickets are $10, free for students.

The program will also include the UALR Women’s Choir performing “Koowu” by Maryam Khoury, “Where the Light Begins” by Susan Labarr and “Music Down in My Soul” by Moses Hogan. The UALR Chamber Singers will perform “The Road Home” by Stephen Paulus and Hogan’s “Elijah Rock.” The UALR Concert Choir will perform “Psalm 23” by student composer Brent Foster II and “Psalm 19” by alumni composer Gerald Mayo.

The program: “Concert Overture No. 1” in C major by Alfred Hollins; “Fantasie” in f minor, K.608, by Wolfgang Amadeus Mozart; “Psalm Prelude” by Craig Phillips; “Finlandia,” op.26, by Jean Sibelius, arranged by Herbert A. Fricker; “Arabesque No. 2” by Claude Debussy, arranged by Friedemann Becker; “Choral No. 1” in E major by Cesar Franck; the second movement, “Allegretto,” from the “Sonata” in e-flat minor, op.65, by Horatio Parker; and the “Fantasia on a Theme by Gustav Holst” by Aaron David Miller. 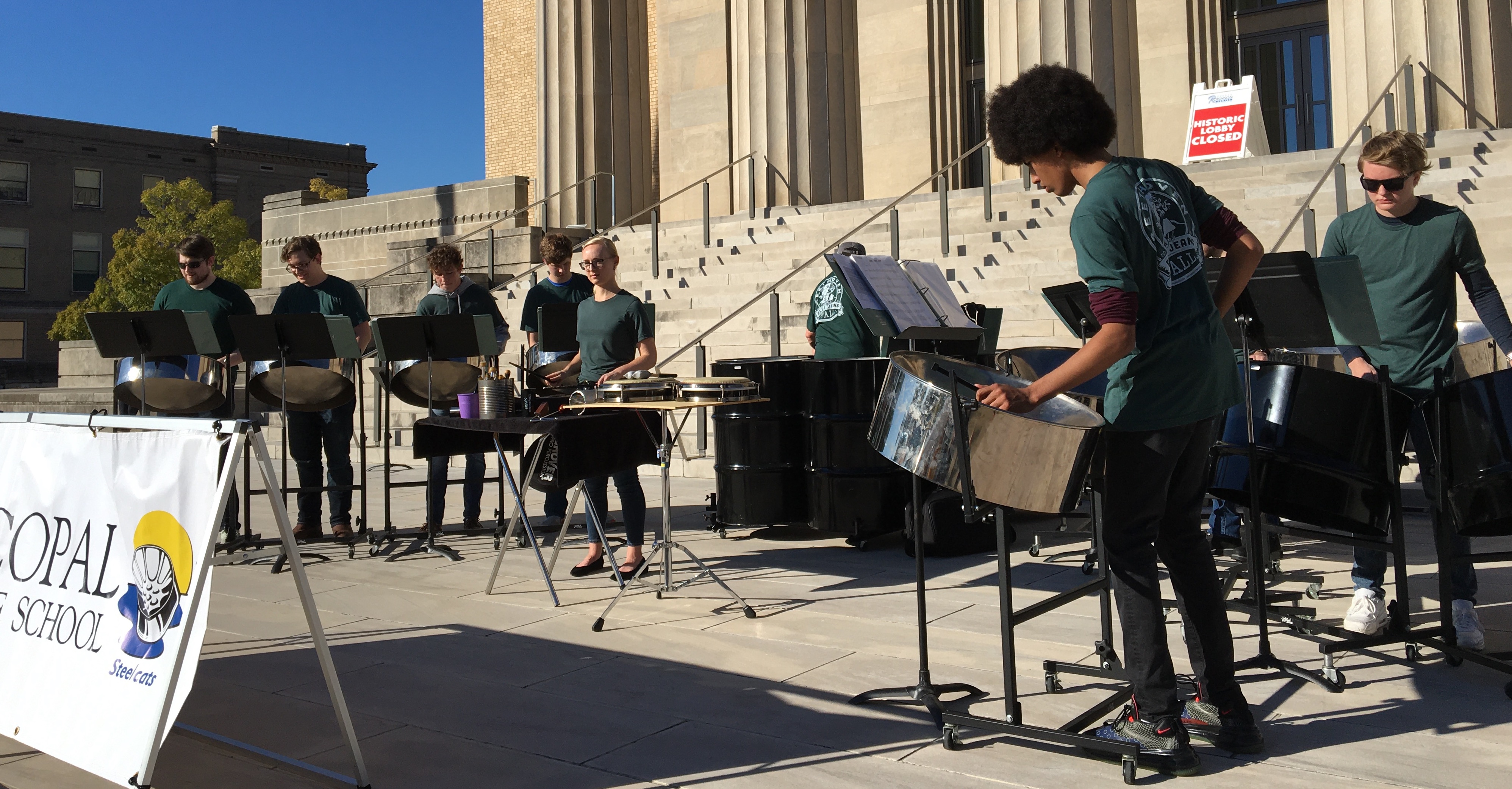 The Steelcats, Episcopal Collegiate School’s steel drum band, performs traditional calypso and soca music, island standards, and popular tunes old and new in “Caribe — Music of the Caribbean,” 6 p.m. Sunday at St. Luke’s Episcopal Church, 4106 John F. Kennedy Blvd., North Little Rock. The concert is in conjunction with a picnic on the grounds. It’s part of the church’s Festival of the Senses performing arts series. Admission is free; the barbecue picnic dinner costs $10, $7 for children 12 and younger. Make dinner reservations by calling (501) 412-3865 or the church office at (501) 753-4281. In case of inclement weather, the concert will move to the church’s parish hall. 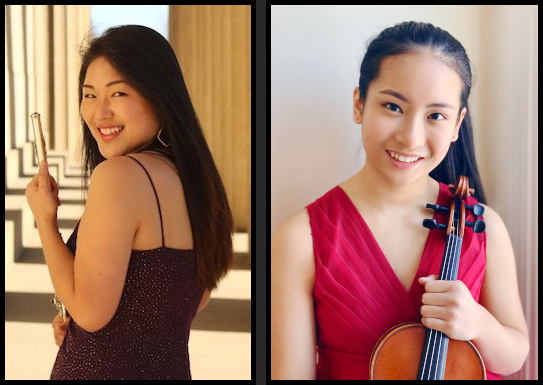 Flutist Crystal Kim and violinist Ella Saputra are the grand prize winners in the Delta Symphony Orchestra’s Young Artist Competition. They’ll solo with the orchestra in a concert Sunday at Arkansas State University’s Fowler Center in Jonesboro. (Special to the Democrat-Gazette)
Young soloists

Flutist Crystal Kim of Pittsburgh will play the “Ballade for Flute and Orchestra” by Frank Martin. Violinist Ella Saputra of Hoffman Estates, Ill., will play the first movement, “Andante Tranquillo,” of the “Violin Concerto” by William Walton. A chorus of students from area junior high schools (Jonesboro MacArthur, Jonesboro Annie Camp, Nettleton, Brookland, Greene County Tech and Buffalo Island Central) will join the orchestra to sing “Why We Sing” by Greg Gilpin, “Inscription of Hope” by Randall Stroope and “I Hear America Singing” by Andre Thomas. Also on the program: The overture to “Nabucco” by Giuseppi Verdi; “Finlandia” by Jean Sibelius; and the national anthems of Ukraine and the United States. Tickets are $20-$35. Call (870) 761-8254 or visit deltasymphonyorchestra.org. 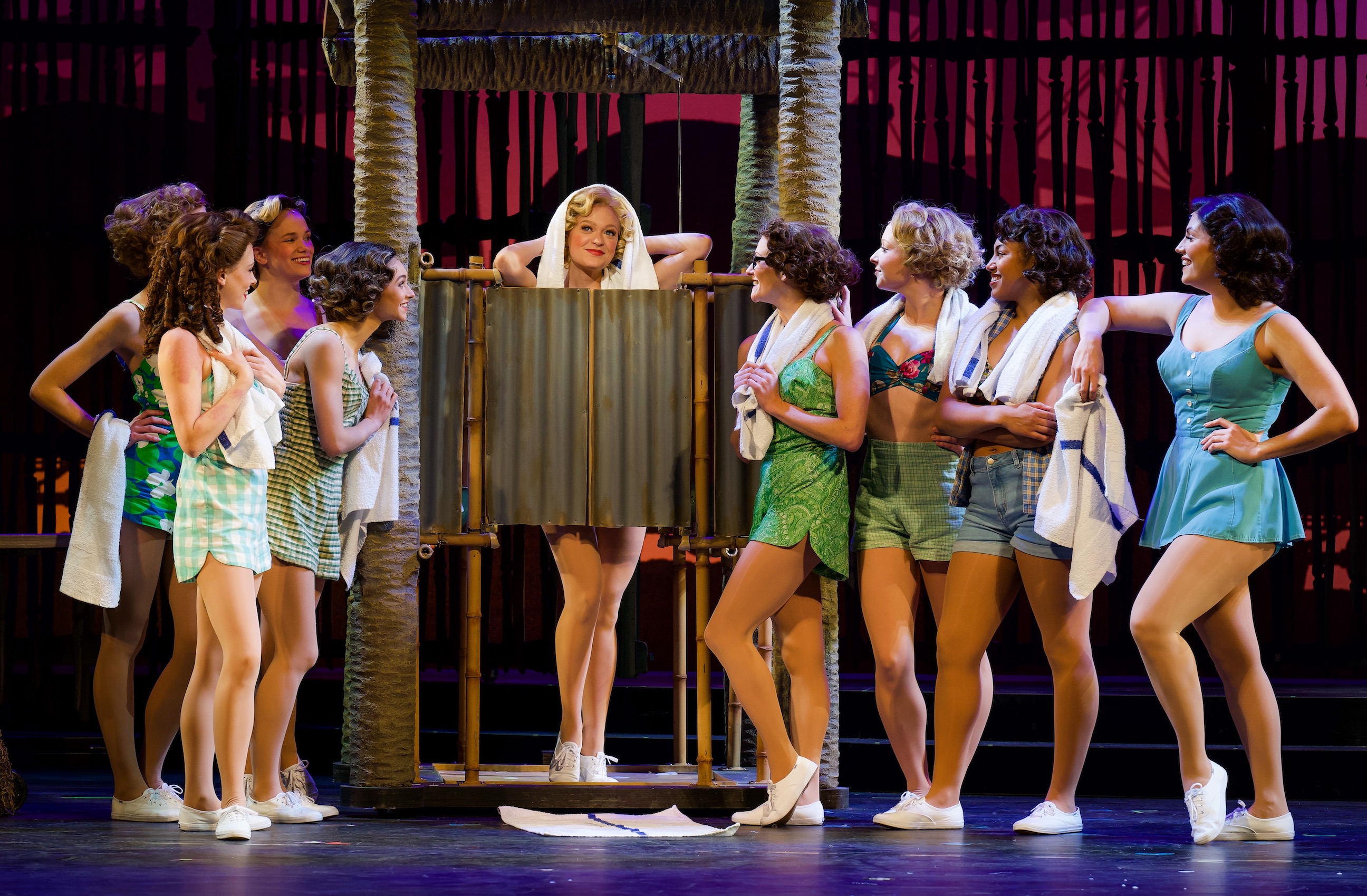 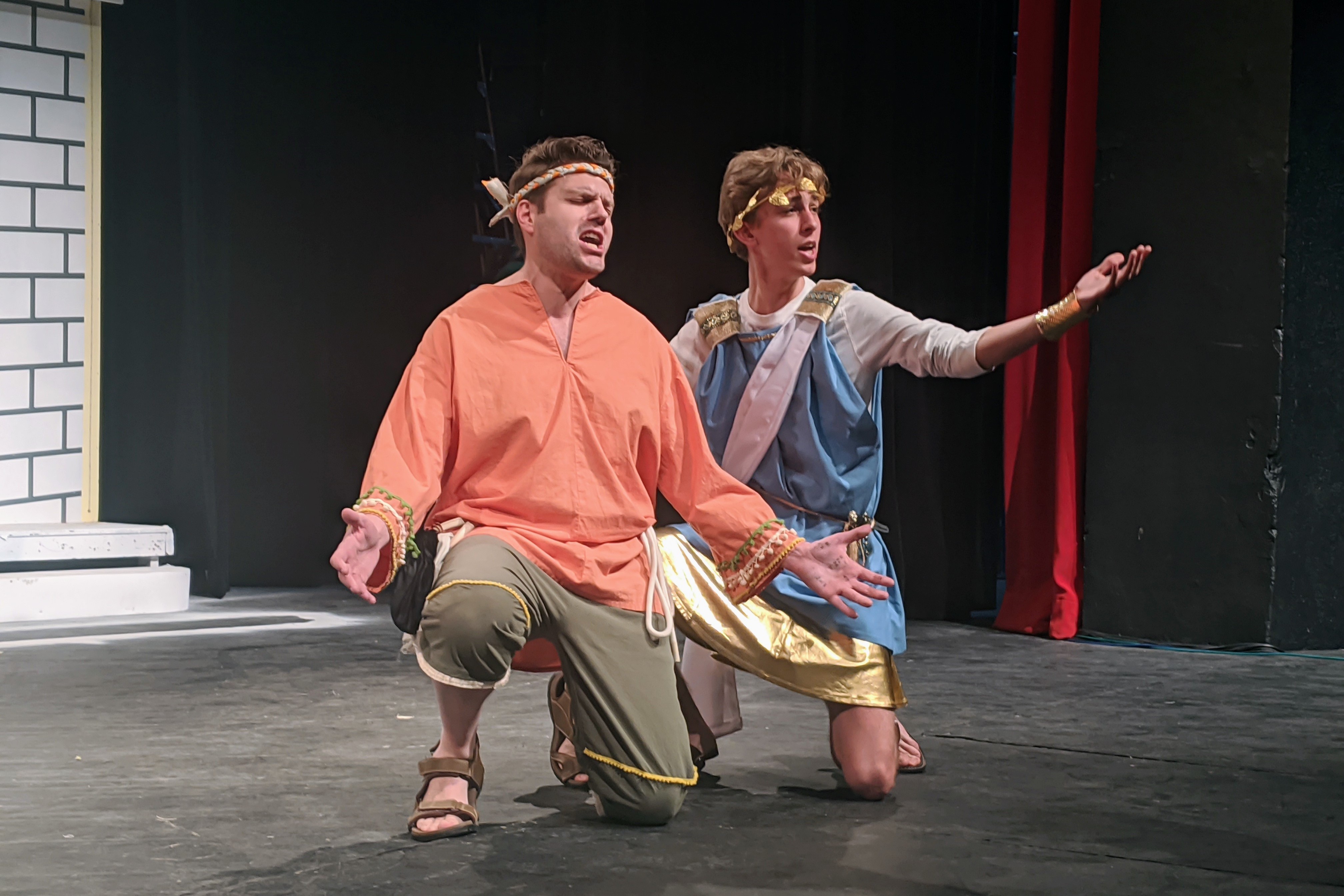 Russ Pierce as Pseudolus and Drew Pulliam as Hero sing a number in “A Funny Thing Happened on the Way to the Forum” at the Forum Theatre in Jonesboro. (Special to the Democrat-Gazette/Meredith Pierce)
‘Forum’ at the Forum

Live at the Plaza

Ballet Arkansas offers free recreational classes and performances “Live at the Plaza,” Tuesday-May 8 at Argenta Plaza, 510 Main St., North Little Rock. Classes include “Rise & Shine Pilates,” “Get Active,” “Ballet on the Grounds,” “Jazz at the Plaza” and “Dancing With Dogs.” Class descriptions and a complete schedule are available at balletarkansas.org/plaza. Sponsors are the North Little Rock Convention & Visitors Bureau and Acansa.

Ballet Arkansas will also give free performances at the plaza at 7 p.m. April 28-30, and May 5-7 and 3 p.m. May 1 and 8. The May 8 performance coincides with a special Mother’s Day VIP reception, hosted by the North Little Rock Convention & Visitors Bureau, that includes access to a shaded VIP area; a picnic basket for two of Arkansas treats and two drink tickets. Tickets are $75; visit tinyurl.com/269vsrra. 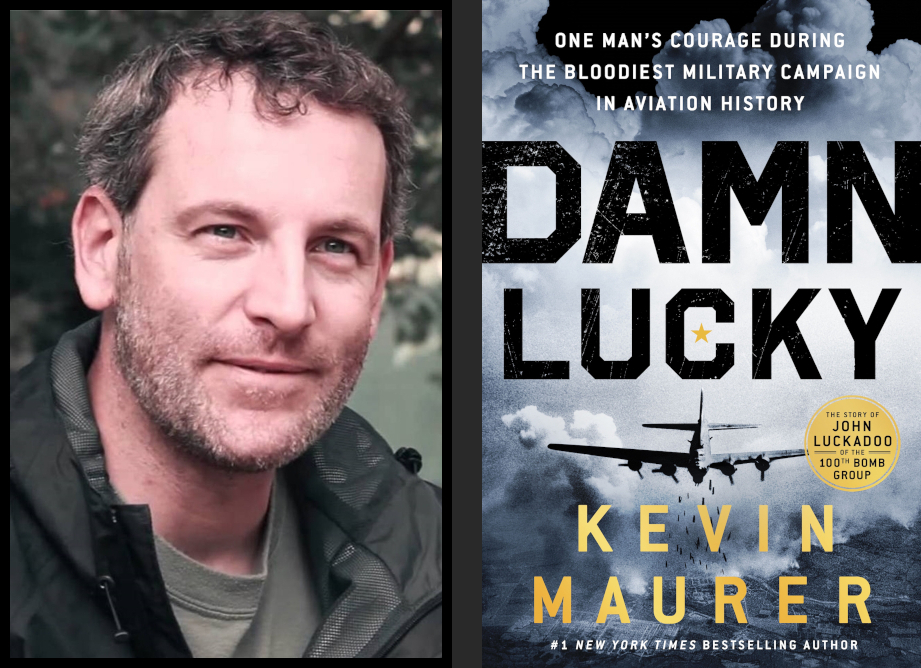 Author Kevin Maurer discusses his book “Damn Lucky: One Man’s Courage During the Bloodiest Military Campaign in Aviation History,” the true story of “Lucky” Luckadoo, who flew some of the deadliest missions of World War II, 2 p.m. Sunday at the MacArthur Museum of Arkansas Military History, 503 E. Ninth St., Little Rock. Admission is free; Maurer will sign copies of the book, which will be for sale. Call (501) 376-4602.

John “Lucky” Luckadoo, now 100 years old, will join the program via Zoom to discuss the book and his recollections of the war. Luckadoo served with the 100th Bomb Group during the early days of the bombing of France and Germany from England, in what was the bloodiest military campaign in aviation history.