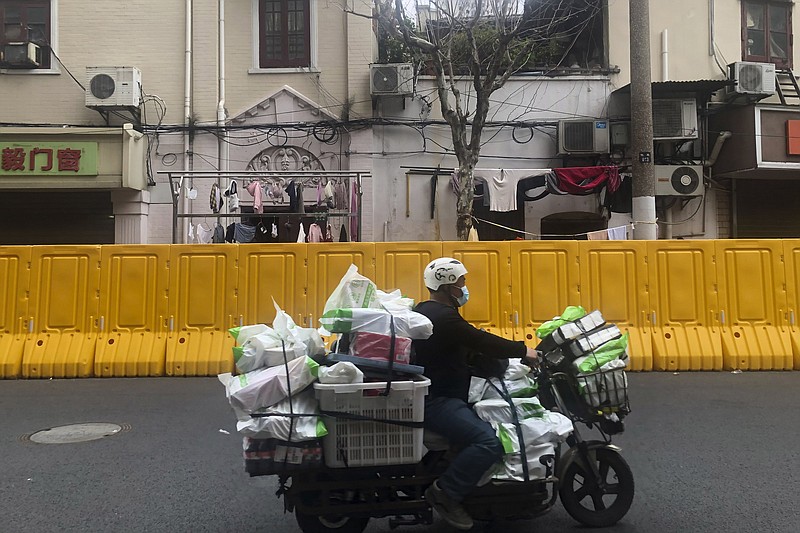 A delivery man passes barriers set up to lock down a community in Shanghai last month. (AP)

Carmakers to supermarkets are gradually resuming operations in Shanghai as the city seeks to recover from the economic toll of an unprecedented lockdown that's still restricting more than 16 million people to their homes.

Local media reported SAIC Motor restarted new car production on Tuesday, while Tesla got 8,000 employees back at a plant that was shut for three weeks. More than 60% of Carrefour's outlets in Shanghai have resumed online business as of Sunday, with the number set to rise to as much as 90% by April 24.

Many factories are able to restart by using a closed-loop system, where staff work and live on-site and undergo regular testing. Bloomberg News previously reported Tesla would use the measure, with workers sleeping on the floor and given an allowance. Quanta Computer Inc. plants, which make Tesla accessories and Apple laptops, resumed partial production under the system.

Officials have sought to get factories back up and running after Shanghai's lockdown brought the city to a halt and threatened China's broader growth outlook. The push also underscores the importance of meeting President Xi Jinping's dual goals of continuing to target elimination of the virus while minimizing the economic and social impacts of the country's Covid Zero strategy.

The resumption comes as Shanghai's health officials said the city has effectively contained community spread, with cases in most districts stabilizing or falling so far this week. Two districts, Jinshan and Chongming, reported zero community spread for the first time on Wednesday.

The city reported another seven deaths, bringing the total number of fatalities this outbreak to 17, mostly elderly residents. Almost one in five people infected in Shanghai are aged 60 or above, and only 62% of the elderly population have been vaccinated.

Even with cases declining, there's no indication of when Shanghai will lift its lockdown or allow a more complete resumption of business operations. More than 16 million people, or about two-thirds of the city, remain confined to their homes or banned from leaving their residential compounds because of recent Covid cases.

That's led to staff shortages. Less than one-third of Carrefour's staff has come back to work, meaning they can only fill online orders, according to a Caixin report.

Companies are also being affected by raw-material shortages and other logistical problems. Tesla said in a statement that production at many Jiangsu-based suppliers are still suspended and there are difficulties in transportation. The government is working to alleviate the supply snarl, it said.

Elsewhere, a number of companies including Foxconn have been allowed to resume operations in the city of Kunshan, which borders Shanghai. The local government has approved the first batch of 60 firms to restart, though didn't give a timetable for their production resumption.

The northeastern city of Harbin asked factories and enterprises to conduct mandatory covid tests, and residents have been restricted from leaving downtown areas unless necessary, after it detected 73 local infections for Tuesday. The city, the capital of Heilongjiang province, also halted subway services and limited road traffic in the downtown region.