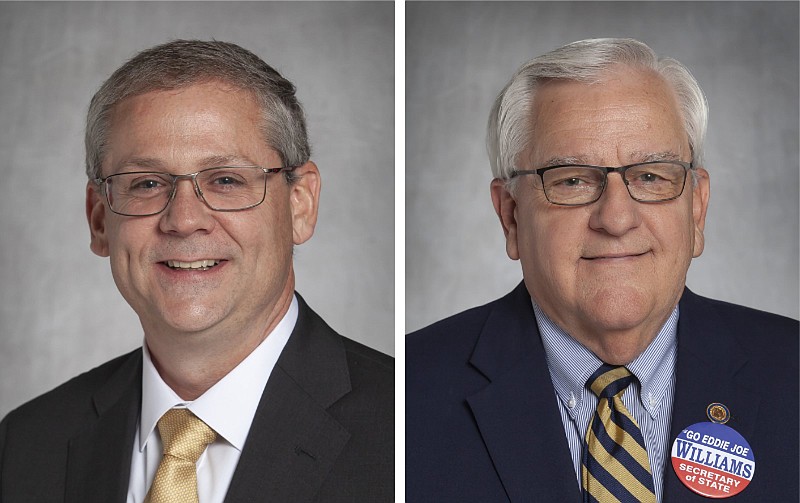 Secretary of State John Thurston (left) and Eddie Joe Williams, his opponent in the secretary of state primary, are shown in these undated courtesy photos.

Republican secretary of state candidate Eddie Joe Williams says his primary opponent, incumbent Secretary of State John Thurston, lacks the management expertise he has and has taken an absentee approach to the job.

"The big difference between him and I is our real life management experience," Williams, a former state senator from Cabot and retired regional transportation director, said. "That office requires management skills or someone else in your office that has them ... to be a problem solver, to be hands on, and that's what I'm committing to do."

Thurston said claims Williams has made in his bid for the office are misleading and that his campaign is based on sensationalism and hearsay.

"Eddie is essentially my ninth opponent that I've ever had in running for office, and he has been the most misleading candidate that I have ever run against and he demonstrates all the reasons why he should not run the secretary of state's office because integrity and character is vital when you are the chief elections officer," Thurston said.

The primary election is set for May 24, and early voting begins May 9. The winner will face the Democratic nominee in November, Josh Price of Maumelle or Anna Beth Gorman of North Little Rock.

The secretary of state's office oversees elections, maintains the state Capitol grounds and processes a number of services for businesses.

Both men are Arkansas natives who attended Sheridan High School.

Williams, 67, joined the U.S. Army at 18, then worked for Union Pacific Railroad for nearly 40 years, ultimately as terminal director. He was mayor of Cabot from 2007 to 2011 and in the Arkansas Senate from 2011 to 2017, when he resigned to accept former President Donald Trump's appointment to the Southern States Energy Board. He served on the board for 3½ years.

He is married with four children and 11 grandchildren.

Thurston, 49, worked in ministry operations at Agape Church in Little Rock and was a certified religious assistant in state prisons before being elected state land commissioner in 2010. He served two terms in that office. He is working on a degree in economics from the University of Arkansas at Little Rock.

He lives in East End in Saline County and is married with five children.

Thurston touted record turnout in the 2020 election, which was the first time every county had used the same integrated voting system.

"When I took office there were 20 counties left to receive that equipment," he said.

He also counted handling federal coronavirus relief funds, including Paycheck Protection Program loans for businesses, the opening of a satellite business and commercial services office in Fayetteville and securing and distributing $1 million worth of personal protection equipment.

Williams, however, pointed to election issues in Pulaski County, where an investigation by the state Board of Election Commissioners found that 327 disqualified ballots were included in the total count and that proper ballot security was not maintained in the 2020 election. He called the situation a "dumpster fire."

"Something's wrong with the process. When that happens, leadership has to stand up," he said. "I will make every effort to ensure that doesn't happen again."

Williams also said that he will investigate every complaint of voter fraud.

"If voter fraud takes place, I'll do my very best to see they're punished to the fullest extent of the law," he said.

Thurston said elections are run at the county level, not the state level, and that the issues in Pulaski County were not reflective of the 2020 election in Arkansas overall.

"I have no authority to come in and run the election for them," he said.

"Every sample that we took was accurate and I hope that encourages Arkansans," he said.

Williams said Thurston was not involved when voting-related legislation came before the Arkansas General Assembly during the 2021 regular session.

"If there is a voter law that's being proposed I will be engaged and I will be at the head of the table," Williams said, adding that he would offer his opinion on the bills.

He also criticized Thurston for having a representative speak in a legislative committee on a bill that would have required the secretary of state's office to develop an online voter registration system. House Bill 1517, by Rep. Justin Boyd, R-Fort Smith, passed in the House but failed in the Senate. Thurston said his office was neutral on the bill and was acting in an advisory role.

Williams said he would not support online voter registration because of security concerns.

"We have the easiest voting system there is," he said. "You show an ID and you vote, I don't know how much easier it could be."

He said he is "for every form of legal registration there is" and that he supports mobile voter registration at large gatherings.

Thurston said he was "hesitant" on online voter registration and Arkansas has some laws that would have to be changed to make it possible. He said he would let legislators handle that because he believes any laws pertaining to elections should be handled at that level, adding that he opposes any executive orders at the state or federal level that impact elections.

"I don't support changing any elections without legislative approval because the elections are that important," he said.

Thurston added that he doesn't "grandstand" in committee meetings on good bills that he knows will pass, but that his office is accessible to legislators on any bill.

With regard to voter outreach efforts, Thurston said his office mailed out a magazine that included a voter registration card to high school seniors. He said the office partners with many groups for voter registration drives and also does public service announcements.

He said to be nonpartisan, voter education efforts must be broad and can't just target people from a particular demographic or area of the state.

"That's probably the one thing that kind of hinders an office like this," he said.

If elected to a second term, Thurston said he wants to focus on the state's voter rolls and make relevant information publicly accessible. He said there is not currently a mechanism where the public or lawmakers can verify the accuracy of the voter rolls.

He said the state should do a better job recruiting good poll workers and that he would like to encourage younger people to get involved.

Williams' criticisms of Thurston also include the response to protests at the state Capitol that took place last summer. Those gatherings, sparked by the murder of Minneapolis man George Floyd by a police officer, were largely peaceful, though there were reports of spray-painting, glass-breaking and intentionally set fires.

Williams said he would have been there with police those nights.

"That was a train wreck," he said.

Thurston said he has supported the state Capitol Police from day one and that no officers were hurt.

"We did learn a bit during that time," he said, adding that his office added 10 officers to the ranks afterward.

"There's debate that happens during elections, there's positions you take that you ask for people around you to help you make, and if you have people who lean to the left, liberal, they're going to give you a liberal point of view. You need people who first and foremost look at the law," Williams said.

Williams said he didn't want to name names, but Thurston said the employee Williams was likely referring to came highly recommended from the Republican attorney general's office and that he saw no signs of his political leanings. He said he doesn't question every employee's political affiliation.

"I have no control over where people go to work once they leave," Thurston said. "The folks closest to me, the leadership certainly are like-minded individuals. I don't want to work at cross purposes with anyone."

Williams said one of his concerns with Thurston was spending, particularly a $68,000 office remodel after he was elected that was the subject of a KATV report at the time.

"I view tax dollars as precious. I'm a less tax kind of guy but the money we get, we have to make sure we spend it wisely," he said. "I've never bought a piece of furniture for my office."

Thurston said he has always operated within a Legislature-approved budget and that his goal as an officeholder is to leave things better than he found them.

The secretary of state's current salary is $98,371. The office is one of the state's seven constitutional offices, which are each limited to two four-year terms.