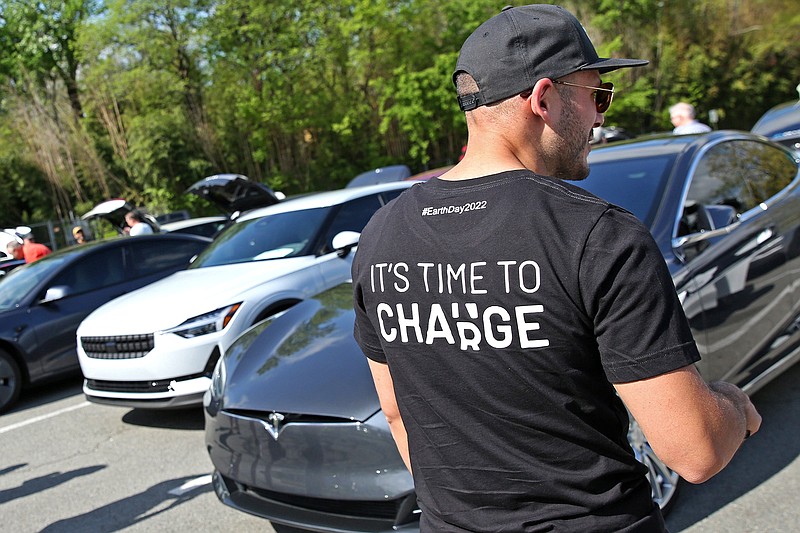 Francesco Guarnieri, right, wears a shirt celebrating Earth Day near a display of electric vehicles lined up in a parking lot across from the Little Rock Zoo as part of the facility's Earth Day events Saturday, April 23, 2022. (Arkansas Democrat-Gazette/Colin Murphey)

Some visitors to the Little Rock Zoo on Saturday morning found themselves intrigued by a lineup of electric cars in the parking lot, part of a city-sponsored event promoting the environmentally friendly vehicles in light of Earth Day on Friday.

"It's nice to come up and see what they actually look like," said Mike Cucciare of Little Rock, who was visiting the zoo with his wife and children. "You see Teslas all over the road, but you don't get to see [other brands] too often."

The city and Audubon Delta held the "Drive Electric for Earth Day" event, in which about 20 electric cars were available for observation and some for test driving. Entergy Arkansas, Adopt A Charger, Evolve Auto, the Little Rock Zoo and the Arkansas Energy Office also sponsored the event.

"We're excited about this opportunity to be clean, green [and] a more sustainable city," Scott said during a news conference.

He recently announced a goal for city operations to run entirely on renewable resources by 2030, and he said Saturday that adding electric cars to the police and fire departments will help achieve this goal, as well as installing more electric vehicle chargers throughout the city.

Firefighter Dan Oberste has owned a Tesla Model 3 for three years and demonstrated its self-driving ability to several curious onlookers in the zoo parking lot. He told the Arkansas Democrat-Gazette that the Fire Department's battalion chiefs and arson investigators could use electric vehicles.

"Right now we're responding in [Chevrolet] Silverado pickup trucks, so something like the [Tesla] Model Y would be good for a battalion chief," Oberste said.

He said electric cars' high price tags can be off-putting but are worth it due to long-term savings on fuel and maintenance.

"The cost of ownership over a five-year period is equal to or even less than what a new gas-powered vehicle might cost," Oberste said.

Climate change, caused largely by fuel emissions, is a primary cause of death among North American birds, which gives Audubon an interest in promoting electric car use and infrastructure, Audubon Delta policy manager Glen Hooks said during the news conference.

"The science says we absolutely have to lessen the amount of greenhouse gases that we put into the atmosphere," Hooks said. "Electric vehicles are a big part of how we're going to solve the climate crisis, because they don't pollute."

Nick Creed of Sherwood told the Democrat-Gazette that his occasional commutes into Little Rock for work frustrate him because of unnecessary fuel emissions.

"I'm sitting there in traffic, stop and go, and the thought that all this pollution, all this gas is getting burned up for no reason" is aggravating, Creed said. "I think I would feel calmer and better about the commute if I wasn't burning up all this gas."

He and his wife, Roz, said they were happy to see so many people stopping to look at and ask questions about the electric cars on display. They also said they appreciated that electric cars can reduce noise pollution.

Entergy Arkansas has subsidized 20 charging stations throughout Arkansas in the past two years, company communications specialist Brandi Hinkle said. The stations are strategically placed along heavily traveled highways, and Entergy pays for the installment of the chargers while private companies pay the electric bills and drivers can charge their cars for free, she said.

The Little Rock Technology Park has one of the 20 charging stations.

The state's only electric car dealership, Evolve Auto, is on West Broadway in North Little Rock. Collin Riggin, a partner with the dealership, said several people at Saturday's event had questions for him about electric cars.

Interest in electric cars has risen a great deal within Arkansas over the past several months, Riggin said.

"We went from selling most of these [cars] out of state to selling them locally," he said. "Our sales and phone calls have probably gone up 200% apiece within just the last six weeks due to fuel prices."

Richard Malott of Little Rock said he is on a waiting list for a Model Y so he can stop driving his gas-powered cruiser.

"I think it's not wise to buy a gas-powered vehicle now," he said. "They are going away, in my opinion."

Kwami Abdul-Bey test-drove a Tesla around the zoo parking lot with his 6-year-old son, who asked him when they can get one of their own.

Abdul-Bey has driven hybrid cars before, but the Tesla "is a fully different creature and I'm loving it," he said.

He home-schools his son and brought him to the event as an Earth Day field trip to learn more about how electric vehicles can help the environment, he said.

Abdul-Bey wants an electric vehicle for several reasons, including the fact that electric car batteries can be refurbished while gas-powered car batteries are unsalvageable when they break down, he said. He also appreciates that the cars can brake by themselves and have cameras on the outside in order to show their surroundings on a screen on the dashboard.

Additionally, reducing fuel emissions will help achieve environmental justice for Black Americans, said Abdul-Bey, who is the legislative and political action committee chair for the Jacksonville chapter of the National Association for the Advancement of Colored People.

"You look at the things that are going on in cities across Louisiana, Texas and Alabama where these Black communities are being heavily negatively impacted by these oil companies," Abdul-Bey said. "We need to stop giving them license to exist, and we can do that by converting our transportation to all electric vehicles."