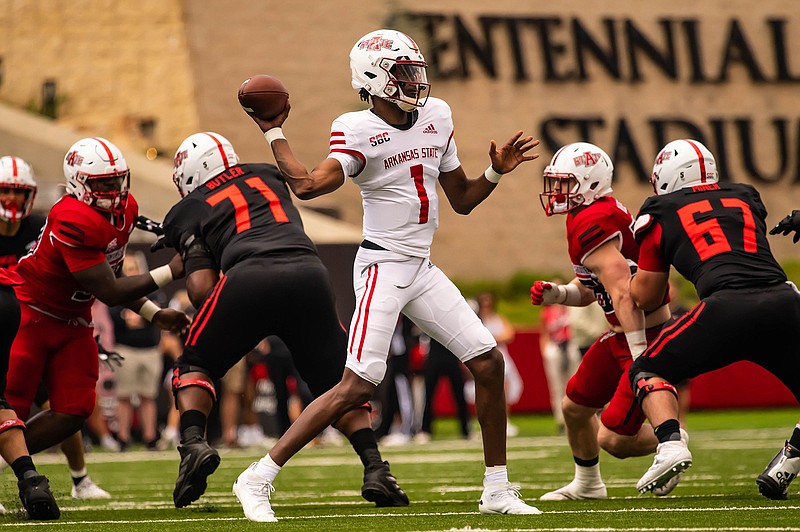 The former is entering his sixth year of college football at his second school, once again looking to stake his claim to a starting spot. The latter is an early enrollee who could just have easily spent this weekend at his senior prom instead of Arkansas State's spring game.

On a day that provided few highlights, most of the attention was on the two guys in white -- quarterbacks wore white jerseys rather black or red as the rest of teammates did -- as the Red Wolves wrapped up the last of their 15 spring practices with a full-length intrasquad scrimmage at Centennial Bank Stadium on Saturday afternoon.

Blackman's Black squad, comprised of the first-team offense and second-team defense, grabbed a 30-28 win in overtime, and ASU Coach Butch Jones praised the 6-5 redshirt senior not only for his play but also for his leadership in completing a game-tying drive, adding the necessary two-point conversion and then converting another in the overtime period.

"He's very calm, he's been very collected and he's on a mission," Jones said of Blackman. "We've spoken about being a CEO quarterback ... an individual who owns the team, owns the offense and has high demands. He's the leader."

Blackman completed 26 of 39 passes for 312 yards and 3 touchdowns, including a 40-yarder to Jeff Foreman with less than two minutes remaining.

It was the first time Blackman had played in front of fans since early October 2021 when he suffered a shoulder injury against Coastal Carolina.

At halftime Saturday, Blackman was given the Red Wolves' leadership award along with transfer safety Eddie Smith.

"I'm thankful that my teammates and my coaches picked me, but in my book, [leading is] just the standard for me," Blackman said. "Being a great leader, you have to learn how to be a great teammate first. ... I know it's my time to give that to the young guys."

One of those young players is Dailey, who was efficient with 23 of 35 passing for 185 yards and 3 touchdowns.

As much as the need to get Wyatt Begeal onto the field precipitated the sophomore's move from quarterback to wide receiver last week, ASU might not have done so if not for Dailey's swift arrival as a legitimate No. 2 quarterback.

Jones described the true freshman's development as "remarkable" but added that he and his staff weren't necessarily surprised by the Iowan's progression.

"Jaxon is very poised as a quarterback," Blackman said. "He sits back there, he waits, he goes through his reads. ... He doesn't carry himself like a freshman quarterback. He's trying to be the CEO of the offensive as we speak."

It looked all too familiar given ASU's problems with explosive plays last season.

Except the ball wound up the turf, not in Foreman's arms.

The junior wide receiver didn't seem all too bothered by that drop nor another in the second quarter, hauling in 6 passes for a game-high 120 yards and 2 touchdowns.

Not only did he and Blackman link up for the game-tying score in the fourth quarter, but the duo combined for a tidy back-shoulder fade just prior to halftime that gave the Black team a 17-14 advantage.

"It's just about being consistent," Foreman said. "Last year, I was doing things out of the ordinary and not doing what I'm supposed to be doing. I was just thinking too much."

Part of Foreman's needed consistency, Coach Butch Jones said, comes from being ready during warmups -- it was a gripe Jones had with much of his team repeatedly last season.

"You've got to get yourself into a combative mindset. ... That all materializes and manifests in pregame warmups," Jones said. "It's something Jeff and I have continued to talk about -- you cannot be casual in football."

Foreman and tight end Seydou Traore were the biggest beneficiaries of a depleted ASU passing attack Saturday. Wideout Te'Vailance Hunt and tight end Emmanual Stevenson were both sidelined throughout camp, and slot wide receiver Reagan Ealy did not dress for the spring game.

Saturday was particularly quiet from a defensive perspective, with no interceptions and no fumbles during the 60 minutes of action.

Some of that was a product of the way the game was officiated -- with quarterbacks not live, it was harder for pass rushers to have a significant impact on the offense.

Another element was the fact that ASU played without both likely starting safeties, Eddie Smith and Taylon Doss, and one of its two outside cornerbacks in Kenneth Harris.

Linebacker Kivon Bennett said he was still relatively pleased with the way the defense nearly opened with a three-and-out and kept the Black offense from scoring a touchdown until almost midway through the second quarter.

"We had a big problem last year coming out super flat," Bennett said. "We have to continue to build on that and just now allow us to shoot ourselves in the foot when we have the momentum on our side."

James Blackman claimed he wasn't considering the postgame meal when his team took the ball to start the two-point shootout extra session.

But both the Black and Red teams knew what was at stake. Or rather, steak.

Taking a page out of the Nick Saban playbook, Coach Butch Jones worked with ASU boosters to coordinate the meal for whichever team won Saturday's scrimmage.

The winners would get the finest cuts of beef. The others? Beef franks.

Blackman put his Black team in position to eat steak with a swing pass to running back Lincoln Pare, and safety KaRon Coleman put a bow on things with a pass breakup on the very next play.

"To be honest, I wasn't even thinking about the food," Blackman said. "I really was just thinking about all the competitive noise I was going to have to hear when we got back in the locker room."

In addition to the program leadership awards, Coach Butch Jones and his staff recognized 11 others during a halftime ceremony.

Guard Ernesto Ramirez and Wyatt Begeal were the Pack Performers with guard Mekhi Butler and linebacker Jaden Harris named Most Improved Players. Running back Lincoln Pare rounded out the group with the 4 to 6/A to B award.