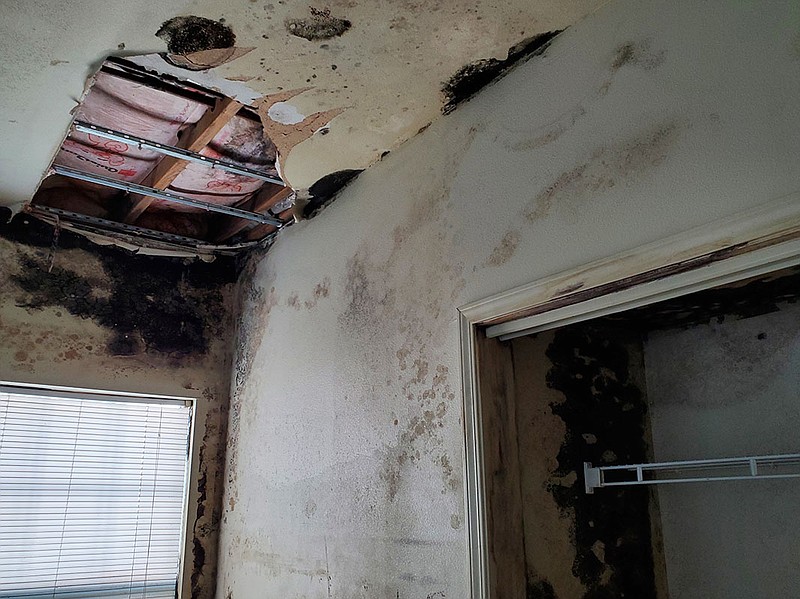 The ceiling in an apartment at Madison Heights, a low-income housing complex run by Little Rock's public housing authority, fell apart due to mold buildup and forced a tenant out of the unit, said Sylvester Smith, an attorney representing the nonprofit Central Arkansas Housing Corporation. Texas development company ITEX managed two Madison Heights complexes and the Homes at Granite Mountain until August. The Metropolitan Housing Alliance, which runs the nonprofit, took issue with ITEX not responding to maintenance requests such as the one to fix the ceiling and get rid of the mold. ITEX has demanded financial compensation for the Alliance ending their business relationship, but Smith said the Alliance sees no reason to comply. (Arkansas Democrat-Gazette/ Tess Vrbin).

ITEX, based in Houston, seeks monetary damages for its claims that the Metropolitan Housing Alliance violated its Master Development Agreement with the firm by ending their business relationship without providing any notice of termination, as the 2016 agreement required. The suit alleges the housing authority also forcibly removed ITEX from the properties it had managed and cited inaccurate reasons for ending the business relationship.

"Years of time and monetary investment on the part of ITEX (and MHA) has now come to nothing because of MHA's material breaches of the MDA," the Feb. 7 court filing states.

The Central Arkansas Housing Corp., the nonprofit arm of Little Rock's federally funded public housing authority, owns and now manages the three properties, which sued ITEX in December over allegations that it breached a different contract between the two entities.

ITEX managed the Homes at Granite Mountain and two Madison Heights complexes under a two-year management contract that expired in June. The Master Development Agreement includes a fourth housing development that is not being disputed in the suits from the housing authority against ITEX.

The Metropolitan Housing Alliance board of commissioners decided in July not to renew the contract, which stated that ITEX must "maintain the Project in good repair ... and in a condition at all times acceptable to the Owner including but not limited to cleaning, painting, decorating, plumbing, carpentry, grounds care, and such other maintenance and repair work as may be necessary."

Housing authority board members said repeatedly at public meetings that tenants told them ITEX did not respond to requests to fix fire damage, mold buildup, plumbing problems and other quality-of-life issues at the three properties. Board members cited these as the reasons they did not renew the management contract with ITEX.

The board also expressed concerns about the then-pending Rental Assistance Demonstration deal between the housing authority and ITEX, which the Master Development Agreement had established.

Under the federal Rental Assistance Demonstration program, administered by the U.S. Department of Housing and Urban Development, private companies take over the lease of a public housing building, though housing authorities still own the land. This private ownership allows housing authorities to enter into contracts with banks and finance companies -- whether through loans, tax credits, grants or a combination -- to receive funds for plumbing, flooring, roofing, electrical and other maintenance.

Tenants in public housing buildings then receive housing choice vouchers, which allow low-income people to choose their own residences in a housing authority's jurisdiction.

At the housing authority's board meeting in April 2021, commissioners said they had doubts about the multimillion-dollar transaction despite reassurance from ITEX leadership that both the housing authority and the Central Arkansas Housing Corp. would receive the thousands of dollars that the deal promised.

The board tabled the three resolutions that would have closed the Rental Assistance Demonstration deal, with one resolution for each property, at a special meeting later in April 2021.

ITEX's lawsuit, filed in U.S. District Court for the Eastern District of Arkansas, alleges that the housing authority pressured the firm to change the terms of the Master Development Agreement, even though it had been in place for five years, so that ITEX would receive less money from the Rental Assistance Demonstration deal than originally agreed upon.

The lawsuit alleges that the housing authority terminated the business relationship because ITEX chose not to renegotiate the terms of the deal. The Master Development Agreement requires a written notice of termination at least 30 days in advance if the housing authority seeks to end the agreement, and ITEX says there was no notice.

"The aforementioned alleged conduct on the part of MHA represents a material breach of Arkansas' implied covenant of good faith and fair dealing called for under the MDA which has caused damage to ITEX," court documents state.

When asked about the status of the Rental Assistance Demonstration deal in October, Commissioner Leta Anthony told the Arkansas Democrat-Gazette that the deal was "at an impasse."

Four members of the housing authority board, including Anthony, are also on the board of the Central Arkansas Housing Corp.

Later in October, lawyers representing the housing authority told ITEX that the procurement authorization from the U.S. Department of Housing and Urban Development had expired, meaning the authority had no reason to continue its relationship with ITEX.

The lawsuit calls this "an unabashed effort to cover up the true motivation" for the housing authority dropping ITEX.

The suit alleges that the housing authority further violated the Master Development Agreement at the end of August when "it caused ITEX Management to be physically removed from and otherwise barred from managing the four sites and from exercising control over the instrumentalities needed to manage the four sites."

This alleged misconduct cost ITEX more than $75,000, the complaint states.

ITEX's lawyers seek a trial to determine the amount of monetary damages that might be owed to the firm, including attorneys' fees.

John Keeling Baker, one of ITEX's attorneys, did not respond to a request for comment. Baker works for the Mitchell, Williams, Selig, Gates & Woodyard firm in Little Rock.

Sylvester Smith of The Firm in Little Rock, who represents the Central Arkansas Housing Corp., also did not respond to a request for comment.

Housing authority leaders have not mentioned the suit at the board's monthly meetings, which include a report from Executive Director Ericka Benedicto on the status of legal conflicts involving the agency.

The Central Arkansas Housing Corp. properties' suit against ITEX is tentatively scheduled for a jury trial in June 2023, according to court documents.

The Metropolitan Housing Alliance oversees about 900 traditional public housing units, 200 affordable housing units and 160 market-rate units. It also administers more than 2,000 Section 8 vouchers. It is the largest public housing authority in Arkansas and provides housing assistance to about 8,000 low-income people.