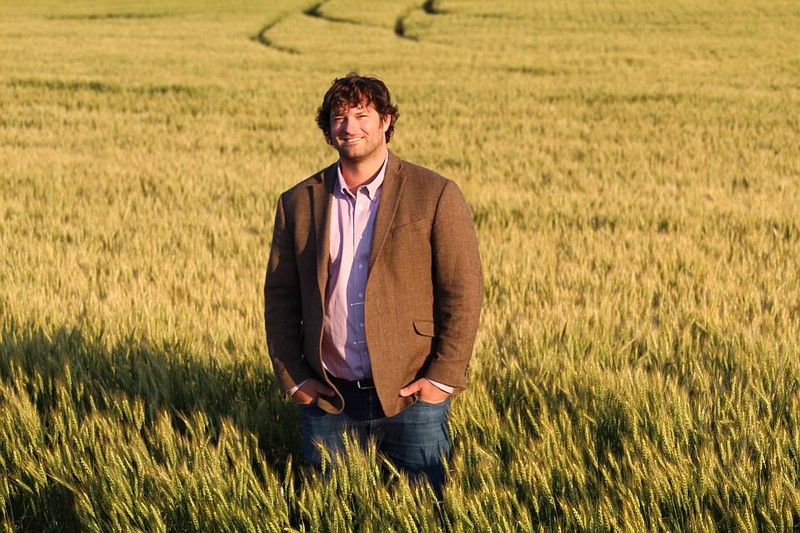 Trey Malone, assistant professor in the Department of Agricultural Economics and Agribusiness for the Arkansas Agricultural Experiment Station, is focused on developing technology that will help producers in regional food systems compete in a global marketplace. (Special to The Commercial/Caroline Kraft Malone)

A new agricultural economist who works with the Arkansas Agricultural Experiment Station says marketing in a world with endless options requires producers to know more about consumer demand.

Trey Malone, assistant professor in the Department of Agricultural Economics and Agribusiness for the Arkansas Agricultural Experiment Station, has spent over a decade researching agricultural marketing issues and is now focused on developing technology that will help producers in regional food systems compete in a global marketplace.

"Once upon a time, a farmer could grow a Red Delicious apple and know someone was going to be willing to buy it at a high enough price, but now consumers have so many different apples to choose from at the grocery store," Malone says. "So, producers need to know even more about what their customers are demanding in the marketplace."

As a potential solution, he is developing an index to inform producers and stakeholders of consumer concerns and help them "get ahead of issues" such as the surge in toilet paper buying at the outset of the covid pandemic. He expects the index, which uses surveys to gather data from a nationally representative sample of consumers, to be available to producers this year. The working title is the Food and Agriculture Systems Sentiment Index.

"We are excited to have Dr. Malone joining the faculty here in the Department of Agricultural Economics and Agribusiness," said department head John Anderson, who is also director of the Fryar Price Risk Management Center of Excellence for the University of Arkansas System Division of Agriculture and the Dale Bumpers College of Agricultural, Food and Life Sciences.

"Trey is well-established as an emerging leader in research and outreach on agricultural and food systems management and value-added agriculture," Anderson said. "He has a deep understanding of the land-grant mission of stakeholder-relevant research, outreach, and education. His diverse interests and skill set are a great fit in a state like Arkansas, with its diverse agricultural economy and rural community needs."

Malone has already begun to work with the Institute for Integrative and Innovated Research, also known as I3R, or "I-cubed-R." The new University of Arkansas research initiative is supported by a $194.7 million grant from the Walton Family Charitable Support Foundation. Malone is submitting I3R's first National Science Foundation proposal to develop a platform to match regional farms with regional demand. The proposal is in direct line with his 2022 Southern Agricultural Economics Association's Emerging Scholar Award keynote address called "Moving the conversation from 'Can we grow it?' it to 'SHOULD we grow it?'"

Malone also hopes to work with the Center for Arkansas Farms and Food, a service center of the experiment station, to assist specialty crop producers with research-driven marketing decisions. Malone's research will be conducted through the Arkansas Agricultural Experiment Station, the research arm of the Division of Agriculture. Starting this fall, he will teach Agricultural and Food Marketing and Agribusiness Entrepreneurship at the University of Arkansas.

Before joining the Division of Agriculture, Malone was an assistant professor and extension economist with the Michigan State University Department of Agricultural, Food, and Resource Economics. He earned his doctorate in 2017 from Oklahoma State University, where his dissertation used the American beer market to explore the behavioral principles underlying how modern-day consumers choose what they eat and drink.

Malone has published dozens of academic articles in peer-reviewed journals as well as opinion pieces in major media outlets such as USA Today, Fast Company, and Popular Science. He also has been featured on television news outlets such as CNBC, CNN, and the TODAY Show. He currently serves as a co-editor for the peer-reviewed journal Agricultural and Resource Economics Review as well as managing editor of the International Food and Agribusiness Review. His research has won multiple awards, most recently winning the Advisor Award for the Northeastern Agricultural and Resource Economics Association.

He also recently recorded a TEDx Talk in Michigan titled "How to change your mind about the food system," focusing on how it reacted to the covid pandemic.

"If I had a nickel for every time I've heard someone claim that covid-19 proves that the U.S. food system is broken," Malone said. "I'm not so convinced. We experienced one of the craziest global events of the last century, and I think the food system responded resiliently to this unbelievable challenge. It's just that most Americans have never experienced barren grocery store shelves."

"Psychologists often talk about rosy retrospection. We all have this idea that things used to be 'better,' but even at the beginning stages of covid-19, we still had more than 8,000 options on that average grocery store shelf," Malone said. "Even if you didn't necessarily like those options, you had more options than your grandparents did."

He said that an overload of choices makes decisions harder for consumers and sometimes distracts them from making a decision. As part of his study on the marketing issue, a bar in Oklahoma agreed to double the number of beers they offered to see if it increased or decreased beer sales.

"If we increased the number of beers offered, we could decrease the chances someone would order a beer because it would overwhelm the customer and they would simply decide not to order one," Malone said.

However, if they offered quality ratings, some other type of third-party verification, or put a particular beer as a special on the menu, they could eliminate the "choice overload problem."

"I can't publish meaningful papers unless I know the problems and have the ability to collect primary data within trusting partnerships," Malone said. "As a land-grant institution, we are responsible to the stakeholders to maintain that level of trust. I think the Division of Agriculture is on the frontlines of maintaining those relationships, and on-campus faculty have an obligation to support that."

Malone's family ranch is the Backwards Rocking L Ranch near Laverne, Okla. His wife, Caroline Kraft Malone, is a developmental psychologist from Tulsa and is set to take on a teaching role in the University of Arkansas Department of Psychological Science, as well as a part-time role in Agricultural Experiment Station communications. She previously worked as an assistant professor in the Michigan State University Department of Psychology.