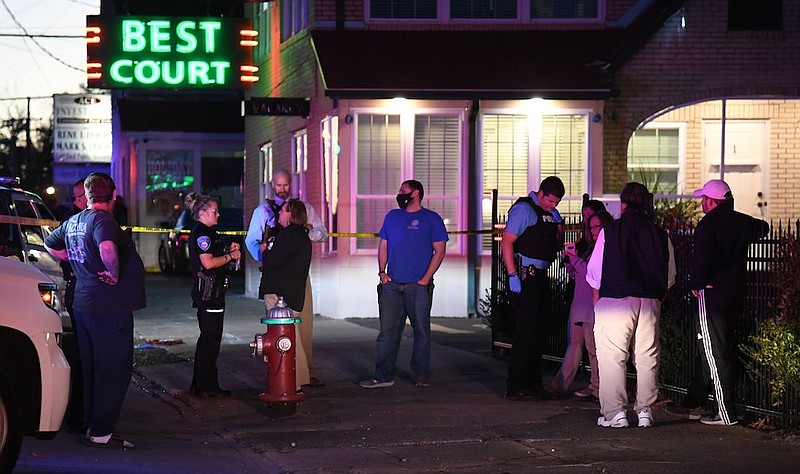 Hot Springs police officers interview witnesses to a fatal shooting that occurred at around 5 p.m. Tuesday, Nov. 17, 2020, near the Best Court Motel, 638 Ouachita. - File photo by The Sentinel-Record

HOT SPRINGS -- A Hot Springs woman was sentenced to 65 years in prison Wednesday after pleading guilty to charges in the fatal 2020 shooting of a local man on Ouachita Avenue that was captured on security video from a nearby motel.

Leslie Rita Jane Sinclair, 27, pleaded guilty in Garland County Circuit Court to second-degree murder, reduced from first-degree murder, and was sentenced to 30 years in prison; possession of a firearm by certain persons, and was sentenced to 20 years; and to a felony firearm enhancement, which added an additional 15 years, all to run consecutively for a total of 65 years.

Sinclair has remained in custody in lieu of $500,000 bond since her arrest Nov. 18, 2020, for the death of Shane Roy Sowers, 43, of Hot Springs, who she shot and killed the day before while he was walking down the sidewalk in the 600 block of Ouachita Avenue.

Chief Deputy Prosecutor Kara Petro told The Sentinel-Record Sinclair was sentenced to the maximum on the latter two charges and will have to serve at least 16 years before she is eligible for parole under sentencing guidelines. She noted Sinclair had a prior felony conviction out of Illinois for arson which resulted in the additional firearm charge.

"We consulted with the family and decided this plea was the safest option in light of what juries have done this year with sentences on murder cases," Petro said.

She cited the case of Elizabeth Hageness, 59, who was originally charged with first-degree murder for the June 19, 2019, shooting death of her husband and could have faced up to life in prison. A jury found her guilty of the lesser charge of second-degree murder on April 14 and sentenced her to 17 years, with an additional three years for a firearm enhancement for a total of 20 years. A mistrial was later declared due to alleged juror misconduct so a new trial has been ordered.

She also cited the conviction last week of Kayvon Ward, 24, where he "got a reduced charge of murder one for killing a law enforcement officer after a two-week trial on capital murder." Ward was sentenced to two consecutive life sentences for the March 10, 2020, shooting death of Hot Springs Police Officer 1st Class Brent Scrimshire.

"Both times the juries did not convict on what the state charged," Petro said. "We have to contemplate what juries do when we make an offer."

Sinclair's attorney, Garland County Public Defender Tim Beckham, had filed a motion for a mental evaluation on Aug. 16, 2021, to determine Sinclair's fitness to proceed with trial which postponed further proceedings. She was later ruled fit to proceed and was set for trial, but opted to plead guilty to the reduced charge.

According to the affidavit, on Nov. 17, 2020, Hot Springs police responded to a report of a shooting shortly after 5 p.m. in the 600 block of Ouachita Avenue. Officers arrived to find a male victim, later identified as Sowers, lying on the sidewalk with what appeared to be a gunshot wound to his back.

He was transported by LifeNet to an area hospital where he later died from his injuries.

Police viewed video surveillance from the Holiday Motel, 642 Ouachita, that showed a woman, later identified as Sinclair, pull an unknown caliber handgun from her purse and follow behind Sowers as he was leaving the motel property.

Sowers continued walking east on the sidewalk and was approaching the driveway of the Best Court Motel, 638 Ouachita, next door to the Holiday, when Sinclair fired a single shot, striking him in the back.

Sowers fell to the ground and Sinclair ran back to her vehicle, a blue Chevrolet Malibu, that was parked at the Holiday Motel. She then sped away and was last seen headed west on Ouachita.

Detectives recognized Sinclair in the video from previous "law enforcement interactions" and a warrant was issued for her arrest the next day on Nov.18. She was arrested at 10:30 p.m. that day on Interstate 55 in Mississippi County and brought back to Hot Springs. 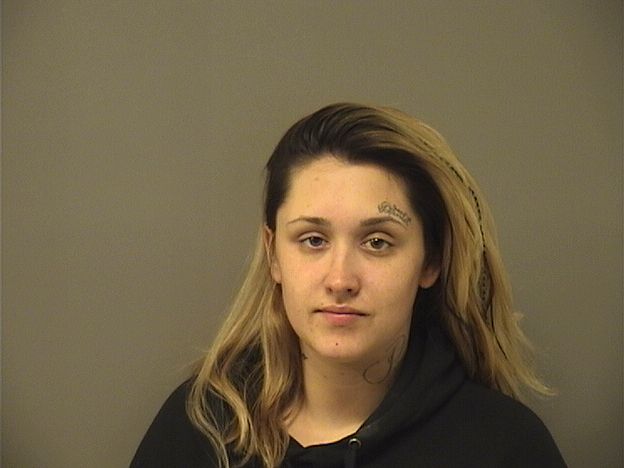