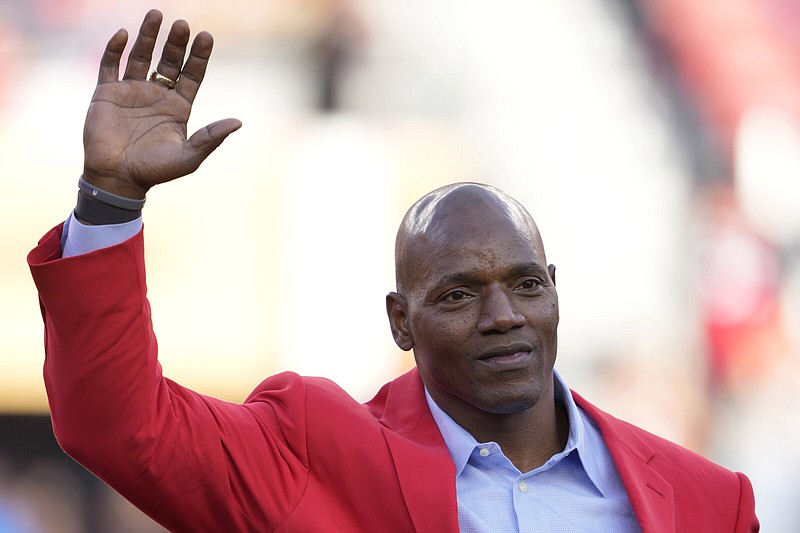 Former San Francisco 49ers player Bryant Young waves during a ceremony for his induction into the team's Hall of Fame during halftime of an NFL football game between the 49ers and the Arizona Cardinals in Santa Clara, Calif., Sunday, Nov. 7, 2021. (AP Photo/Tony Avelar)

Bryant Young straddled the classic football divide between discipline and ferocity more adeptly than just about any player of his generation.

For every minute of a 14-year NFL career spent entirely with the San Francisco 49ers, Young was a model teammate and a soft-spoken leader who selflessly made everybody around him better.

And for 60 minutes on most autumn Sundays, Young was one of the most intimidating, vicious defensive linemen his teammates and opponents had ever seen.

Young doesn't see that dichotomy as a contradiction. In fact, he loved the chance to get a little crazy while being a measured, mature man in every other area of his rich life.

"Football is a very chaotic, violent, physical sport," Young said with a smile. "It's controlled chaos. You don't get better and you don't excel in the game by being this passive, nice individual."

Yet that's exactly what Young did as one of the most inspirational players and one of the genuinely nice guys of his NFL era.

In addition to his production and resilience at one of the sport's most brutal positions, Young's ability to inspire -- both through his play and through his response to unimaginable setbacks on and off the field -- finally earned him admission to the Pro Football Hall of Fame this summer, nearly 15 years after his last game.

Typically, Young felt a responsibility when he learned he'll finally get a gold jacket.

"I want to make sure that I do that well and handle it with care," Young said. "I want do a great job representing all the members of the brotherhood."

Young was a model of leadership, production and punishing play, but he wasn't a flashy attention-grabber on the field or a flamboyant personality away from it.

That's probably why he waited so long for his enshrinement -- and why it might not have happened at all if a group of six offensive linemen hadn't been rallied together by the 49ers' former PR director last December to film a video testimonial nudging voters to choose Young.

One of the best three-technique defensive tackles of his era, Young had 89 1/2 sacks and earned four Pro Bowl selections in an era rich with talent at the position. He earned an All-Pro nod in 1996, his most exceptional statistical season with 84 tackles, 11 1/2 sacks and 2 safeties.

The 50-year-old Young seemingly has been a throwback for his whole life.

Young grew up in blue-collar Chicago Heights with two older brothers and a father who worked for the Ford Motor Company. Although he didn't play football until his freshman year at Bloom High School -- initially thinking he would be a fullback -- his talent eventually got him to Notre Dame.

He was a three-year starter for the Fighting Irish, becoming a team captain, a determined leader -- and eventually, the second defensive lineman chosen in the 1994 draft.

San Francisco won it all in his rookie season, with Young starting the Super Bowl victory over San Diego. Although the Niners never got back to the Super Bowl during Young's career, they remained a consistent winning team until his final seasons.

Young calls it "a huge blessing" to play for just one team: "I know that most people don't get the opportunity to finish their career where they started, so I don't take that lightly."

The biggest challenge of Young's career arose late in the 1998 season when his left shin was grotesquely broken by Norton's helmet. Young spent more than two weeks in the hospital and needed extensive surgery just to save his leg from complications.

After retiring in 2007, Young moved to North Carolina with his wife, Kristin, and their six children. He has also coached defensive lines for San Jose State, Notre Dame, Florida and the Atlanta Falcons.

The Youngs also endured the unimaginable pain of losing their son, 15-year-old Colby, to pediatric brain cancer in 2016. Bryant Young handled the tragedy with the same maturity and quiet strength that has been the foundation of his entire life, and he emerged with a determination to continue a lifetime of selflessness and leadership.

"For the young guys, the advice that I would give them is this: Never, never be content," Young said. "Always find an opportunity to get better and move forward. There's always work to be done. Don't get encased in being one way. There's always opportunities when you remain open and you remain teachable. Keep your eyes focused on what's ahead, and always be open to improve." 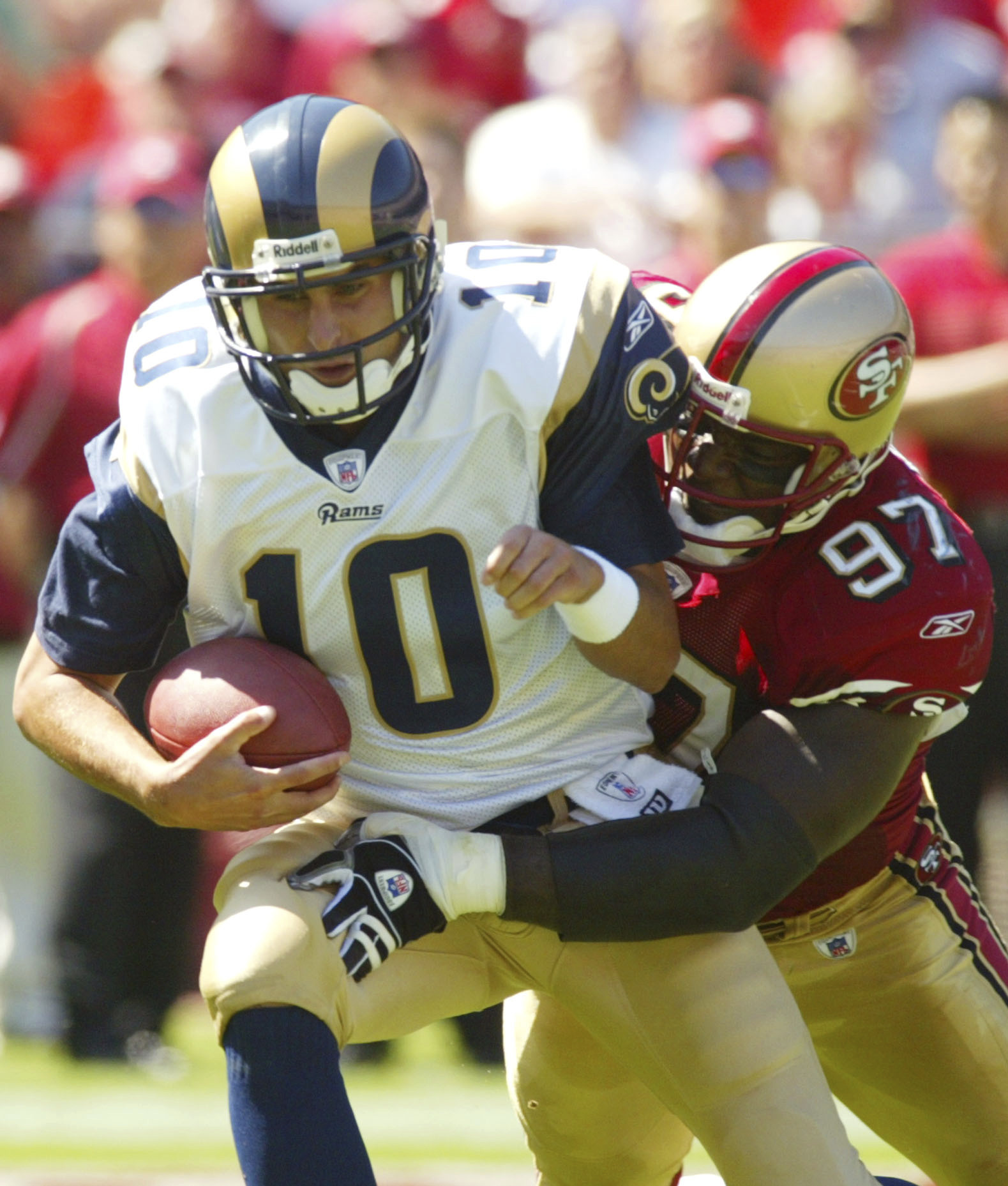 FILE - St. Louis Rams quarterback, Marc Bulger, left, is sacked by San Francisco 49ers Bryant Young during an NFL football game on Sept. 11, 2005 in San Francisco. Young's ability to inspire — both through his play and through his response to unimaginable setbacks on and off the field — finally earned him admission to the Pro Football Hall of Fame this summer, nearly 15 years after his last game. (AP Photo/George Nikitin, File)