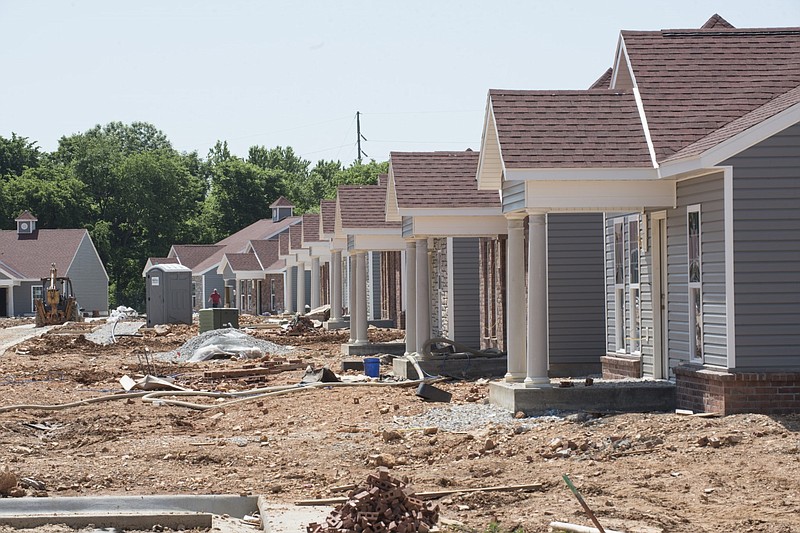 FILE — Rows of houses are seen under construction in the Mansions, a multifamily development off Mill Street in Springdale, in this May 2018 file photo. (NWA Democrat-Gazette/Spencer Tirey)

SPRINGDALE -- The Springdale Planning Commission on Tuesday night considered developments that would bring more than 500 housing units to the city.

Most were approved, but some were tabled because commissioners asked for more information or a closer look by city staff.

"We need more housing, and it's pretty much that simple," said Payton Parker, a member of the Planning Commission.

Parker said the city needs all kinds of housing -- apartments, condos, single-family, multifamily, duplexes, triplexes and mobile homes -- although he prefers housing more dense with people near trails and other amenities.

But the city needs to be smart about the projects it approves, Parker continued.

"The first duty of the Planning Commission is to protect residential property," Parker said.

The city requires three spaces each for 20 units and 2.5 spaces for 36 units.

He noted the city ordinances do not address garage spaces, and parking requirements for other structures contradict the rules for his project.

"I certainly hate to hold up any housing development for parking -- because we can't decide between 2 and 2.5 parking spaces," Parker said.

The commission tabled a vote on the Whispering Springs subdivision of 262 single-family home lots at Howard Anderson Road and Hylton Road. The developer also asked for a waiver of street improvements.

The city requires developers to improve the city street in front of their property, adding drainage infrastructure, curbs, gutters and sidewalks.

The city also requires multiple entrances into a neighborhood for emergency services access. This wasn't planned until the fourth phase of construction of Whispering Springs, said Kevin Michaels with Anderson Engineering.

Larry McCredy, a lawyer representing Hylton Real Estate, which is developing a neighboring property, expressed concern about the plans for the Whispering Springs project. The only resident access to Whispering Springs also would come off Howard Anderson Road until the fourth phase of the project was built. The Hylton representatives feared drivers trying to access Whispering Springs would try to run across their private property, no more than a gravel trail, McCredy said.

The Collin's Cove project on North 56th Street, south of Elm Springs Road, did not even get a vote by the commission. The developer was asking for final approval before construction could begin.

Christie said the city considers the final plat only after 95% of the water and sewer infrastructure and 80% of the streets have been built. No building permits will be issued and no individual lots can be sold until the final plat is approved, she said.

But a neighbor across the street from the planned subdivision noted, that with the new infrastructure, the subdivision area pooled all stormwater into a pond that didn't drain. Rather it flooded his property, which previously had not flooded in the 23 years the man lived on the property, he said.

Both the project engineer, Engineering Services and the city's Engineering Department, said they had visited the site, but not during rain.

"I hear this at every meeting. People concerned about drainage," Parker said. "This man has called several people, and no one has called him back. I'm not trying to lay blame. But he has a problem, and we have not done one thing to figure out a solution."

• Hylton, Phase 2, 46 lots at the southeast corner of Hylton Road and Stonehenge Avenue.