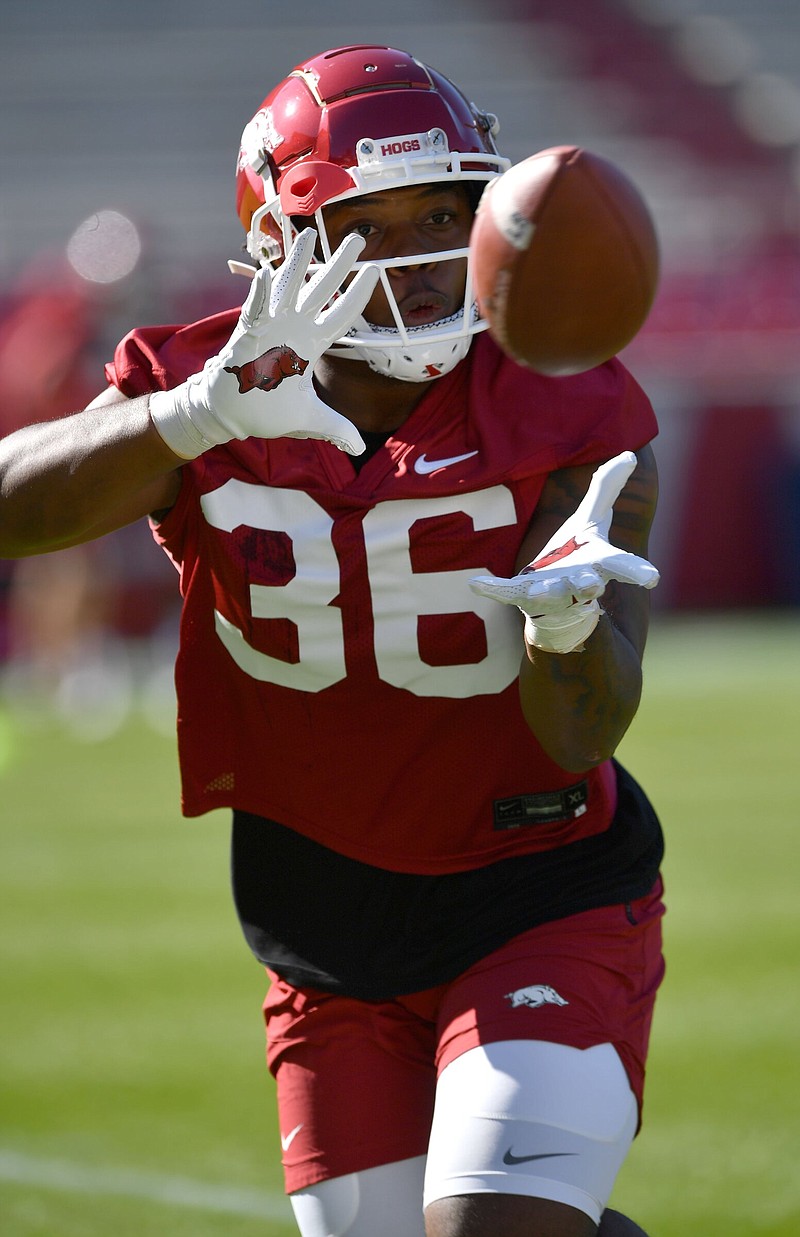 The 13th in a series featuring newcomers to the University of Arkansas football team.

During the recruiting process, University of Arkansas freshman linebacker Jordan Crook got a taste of the Razorback fan base, but since he enrolled in January the taste has grown.

"I was just surprised by the people here," said Crook in an early July. "The people outside of the program it's a deep culture, and I really didn't know all about it. I heard about it, but I actually saw it for myself when I came out here as far as the fans and things like that."

Eating out in Fayetteville has been an experience for Crook.

"People will just come up to you and want to take pictures," he said. "They know your name. That's always pretty cool. It just kind of surprised me."

A consensus 3-star prospect, Crook was named the No. 9 player in the Dallas Morning News' top 50 area recruits for the Class of 2022. While he appreciates the fan base, his focus is the football field.

"I'm just here to play, but when stuff like that happens, it's always cool," Crook said. "It's something I worked for, but I really haven't done much yet. I keep a level head when it comes to that type of stuff."

As a senior, Crook recorded 98 tackles, 10.5 for loss, 4.5 sacks, 2 pass break-ups, 3 forced fumbles and 3 interceptions with 2 returned for scores while leading the Panthers to the Class 6A Division 1 championship title game.

He had 93 tackles, 7 tackles for loss, 6 sacks and 3 interceptions while returning 2 for touchdowns as a junior.

"He can see the field and understand what play is going to happen under two seconds," Samuels said. "He's so fast and explosive he can get from sideline to sideline and make a play whether he's in front of it or whether he's coming from behind. He's going to find a way to the ball."

Crooked played his sophomore season at Dallas Bishop Dunne before transferring to Duncanville for the second semester in January.

Soon after arriving on campus, Samuels said Crook bugged him for two weeks about getting a Hudl account. Hudl helps coaches and players prepare with numerous features, including video. Players often download their highlights so college coaches can evaluate their film.

Samuels thought Crook wanted to use Hudl to promote himself but that wasn't the case. He wanted to study the Panthers' defense so he could get a head start for spring practice.

"That always stuck with me because today's society kids only focus on themselves and whatever works for them right now," Samuels said. "In January and February, they're definitely not thinking about learning plays. That always weighs heavily on my mind. That from a 16-year old."

Crook reported to Fayetteville weighing 225 pounds and has stayed at that weight but has redefined his body.

"I'm at 225 right now but the difference is my body has changed," Crook said. "I'm more lean and I'm a little bit more toned up, a little bit more muscular. Some even say I look smaller than I was in high school simply because I've changed my body and my eating habits."

He credits director of strength and conditioning Jamil Walker and his staff for pushing him and his teammates.

"Love this side of football because outside of football this is where we spend the most time," Crook said. "I really feel like they mean the best for us and help us out a lot. All we have to do is come in here and just work and reap the benefits They push us like no other, but at the end of the day you have to want it for yourself, and I feel like I come here everyday on my mind that I'm going to attack the day and win the day."

The ultra-competitive Crook isn't satisfied with anything other than winning.

"Me personally, I hate losing," he said. "That's what keeps me going in these workouts. I just know my goal."

Crook said he has leaned on junior Drew Sanders and fifth-year senior Bumper Pool since arriving on campus. He and Pool, who was an All-SEC linebacker last year, have hit it off.

"I feel like we have a connection," Crook said. "We're both from Dallas. We always laugh and joke about that type of stuff. That's really the one person I look up to. I take pieces from him and work off of that and be the best I can be. I really soak up what I can and learn from him because at the end of the day he's been here and done this for a few years. That's what I'm trying to do."

Crook says he feels good about where he stands heading into fall practice.

"I feel like I've showcased what I can do against other people on the team," Crook said. "I've showcased I'm able to play with the top dudes, and I feel like that will help me out going into the fall. I've been running with the [second team] lately and kind of working my way into the rotation. I'm only trying to go up from there."

As far as life off the field, Samuels credits Crook's parents, Joe and Wuan, for raising a young man that coaches don't have to worry about getting into trouble.

"He's always going to do right," Samuels said. "I equate that to his upbringing."

Crook at a glance

NOTEWORTHY High school team captain. … Had 3.4 grade-point average in high school and is considering a major in business marketing. … Former Oklahoma State commitment. … A consensus 3-star prospect and ESPN’s No. 35 inside linebacker in the nation. 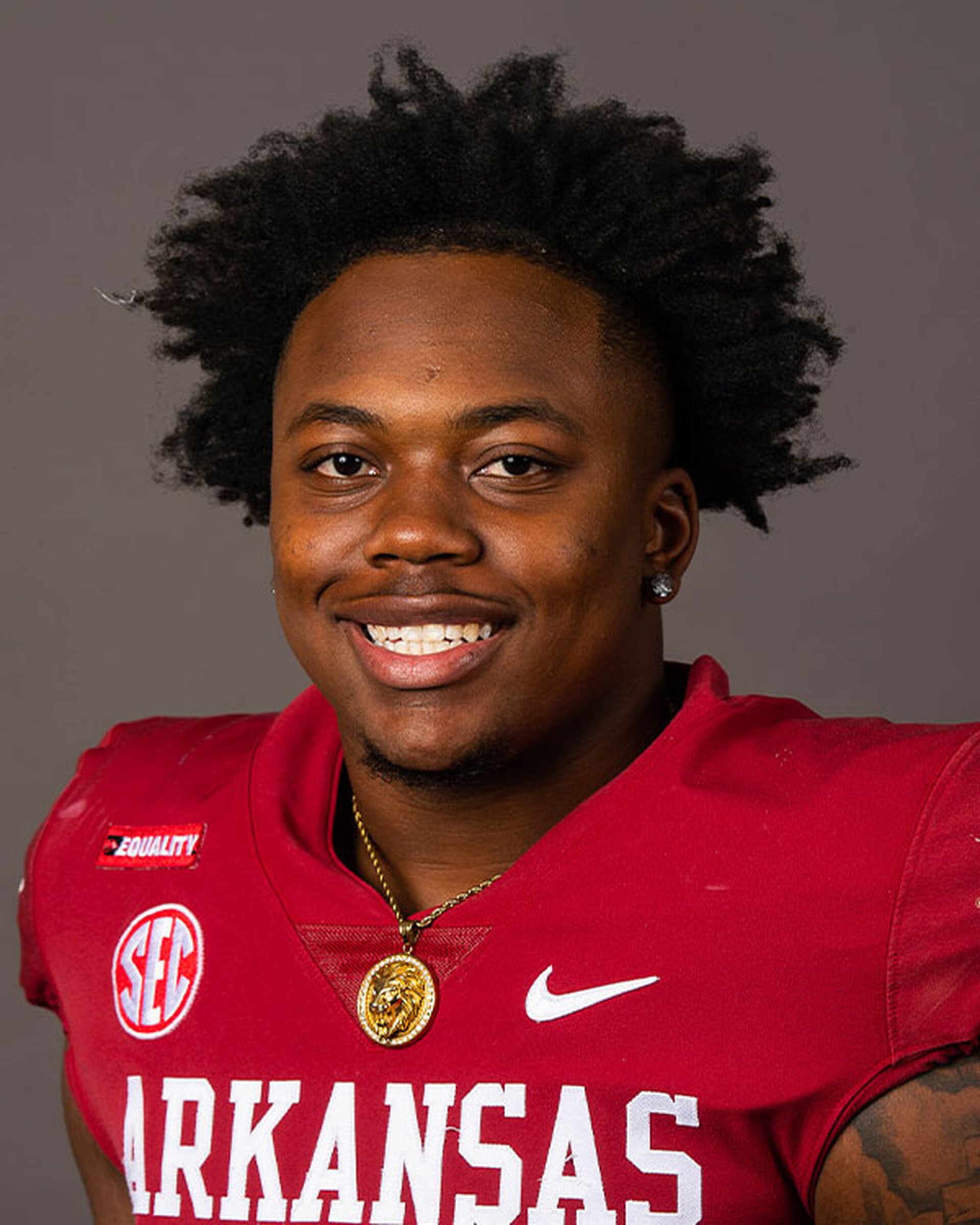 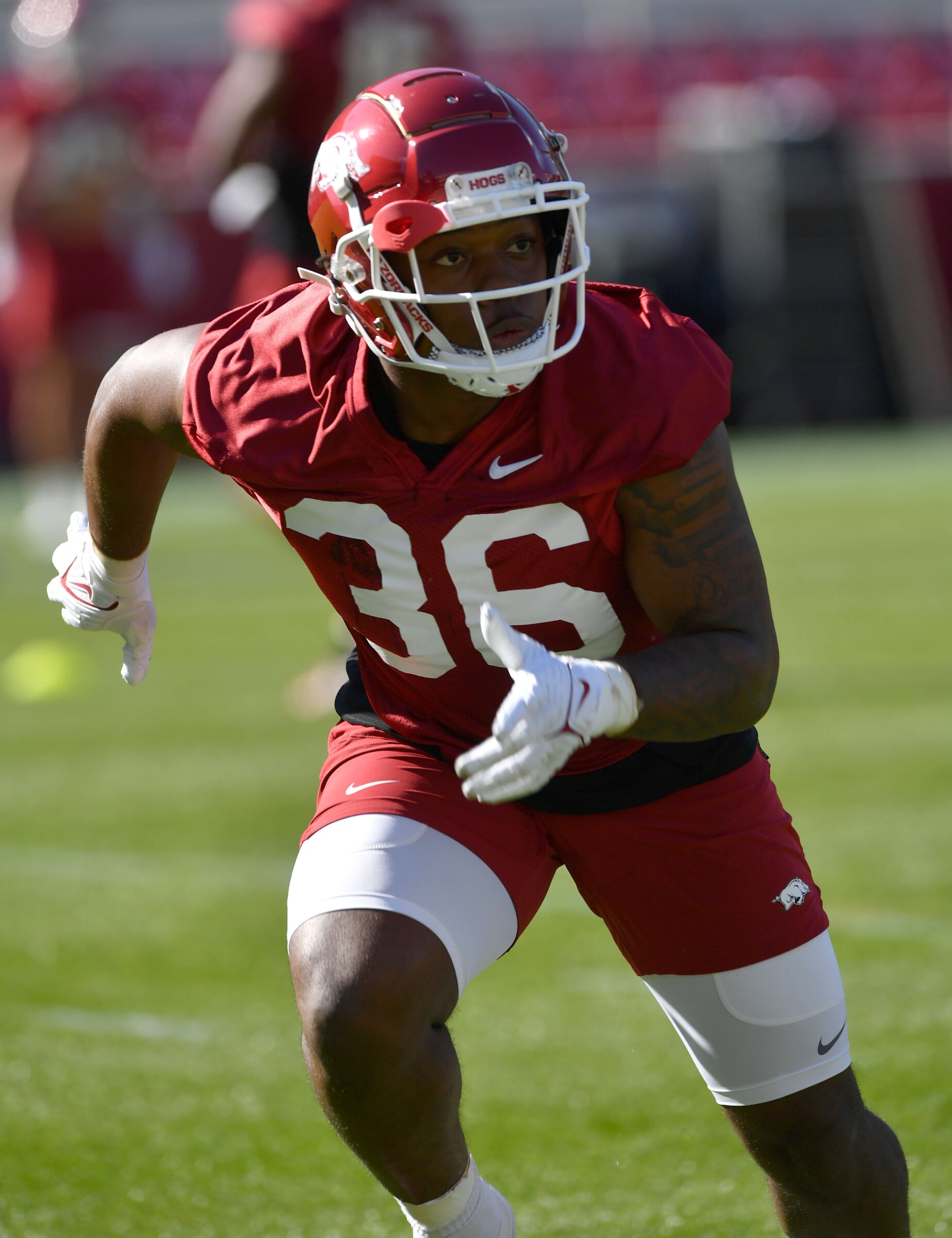 Arkansas freshman linebacker Jordan Crook, seen here during a March practice, weighs the same 225 pounds he did when he reported to Fayetteville but said he has become more toned and lean. (NWA Democrat-Gazette/Andy Shupe)