A race to save fish as Rio Grande dries, even in Albuquerque 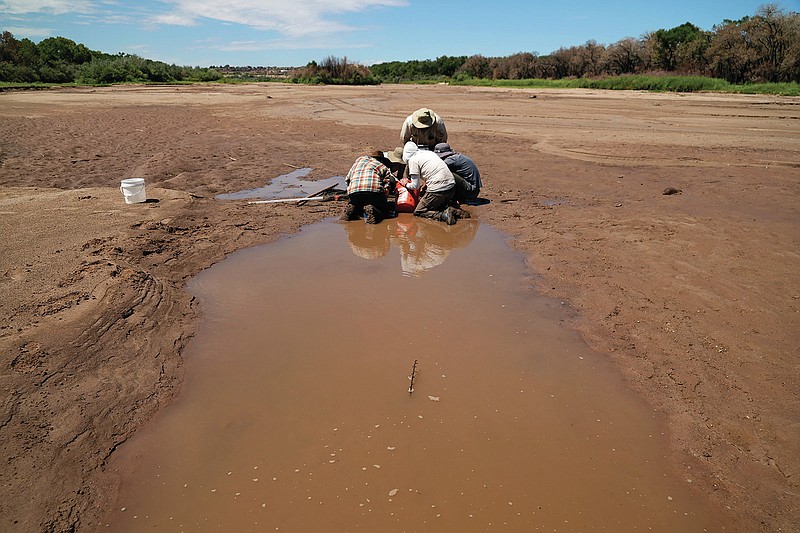 ALBUQUERQUE, N.M. -- On a recent, scorching afternoon in Albuquerque, off-road vehicles cruised up and down a stretch of dry riverbed where normally the Rio Grande flows. The drivers weren't thrill-seekers, but biologists hoping to save as many endangered fish as they could before the sun turned shrinking pools of water into dust.

For the first time in four decades, America's fifth-longest river went dry in Albuquerque last week. Habitat for the endangered Rio Grande silvery minnow -- a shimmery, pinky-sized native fish -- went with it. Although summer storms have made the river wet again, experts warn the drying this far north is a sign of an increasingly fragile water supply, and that current conservation measures may not be enough to save the minnow and still provide water to nearby farms, backyards and parks.

The minnow inhabits only about 7% of its historic range and has withstood a century of habitat loss as the nearly 1,900 mile-long river was dammed, diverted and channeled from Colorado to New Mexico, Texas and northern Mexico. In 1994, the U.S. government listed it as endangered. Scientists, water managers and environmental groups have worked to keep the fish alive -- as required by the Endangered Species Act -- but the efforts haven't kept pace with demand for water and climate change.

Years of drought, scorching temperatures and an unpredictable monsoon season are zapping what's left of its habitat, leaving officials with little recourse but to hope for rain.

"They're adapted for a lot of conditions but not to figure this out," said Thomas Archdeacon, a U.S. Fish and Wildlife Service biologist in charge of a program to rescue the fish. "When you have flow one day and no flow the next for miles, they don't know how to get out of that."

When parts of the river dry out, officials use hand nets and seines to pull fish from warm puddles and relocate them to still-flowing sections of the river. The minnow's survival rate after being rescued is slim -- just over 5% -- due to the stress of warm, stagnant water and being forcibly relocated.

Still, leaving the fish in the pools is a certain death sentence, said Archdeacon. He and the other biologists drove over miles of dried riverbed to where the water picked up again -- at the outflow of a sewage treatment plant. Only a handful of the 400 rescued fish would survive, with their best chance swimming through treated sewage.

Over the years, the government has bred and released large numbers of silvery minnows, but for the species to recover, it always comes down to habitat, officials say.

And few options remain to get significantly more water into the river.

"Climate change is coming at us so fast right now that it's outstripping those tools that we developed over the last few decades," said John Fleck, a water policy researcher at the University of New Mexico.

Historically, one way to send more water into the river has been to release it from upstream reservoirs. But this year, New Mexico has been unable to store extra water because of a downstream debt it owes Texas as part of a compact. Deep into the driest period the West has seen in 1,200 years, the river wasn't replenished by rainstorms that came in June.

"The timing and the placement of the storms weren't in the right place to keep the river flowing," said Dave Dubois, New Mexico's state climatologist.

To keep more water in the Rio Grande, the state and irrigation districts are offering to pay farmers to leave fields unplanted, but so far, few have opted in. In New Mexico, small-scale farming is the norm, and many farmers water their fields with centuries-old earthen canals that run through their backyards, maintaining the land for cultural reasons, too.

By fallowing their fields, farmers would help save water for the minnow and alleviate the debt to Texas. But officials say that in one key district on the river, only 5% of land was left fallow this year.

"We need more people to do it," said Jason Casuga, chief engineer for the Middle Rio Grande Conservancy District. But the program is just in its second year, and farmers want to grow crops, Casuga said.

For the past four years, Ron Moya has farmed about 50 acres of hay and produce near Albuquerque. A retired engineer, Moya said he answered a calling to work the same land that generations of his family had cultivated before him. Last year, Moya left 10 acres of his plot unplanted in exchange for several thousand dollars but said he wouldn't do it this year -- even though he was offered more money -- because he wanted the moisture to keep the soil on his farm alive. Moya is skeptical that fallowing alone will achieve much.

"There's people whose livelihood depends on growing their hay. That's what they know. Can you imagine the whole valley being fallowed? That just seems silly," he said.

Nor is there much water to squeeze out of New Mexico's biggest city, Albuquerque. Like other Western metropoles, the city of roughly 563,000 has dramatically cut its per-capita water use, from about 250 gallons per day in 1994 to to 119 gallons in 2019, according to data provided by the city's water utility. Albuquerque also uses groundwater and water from the Colorado River.

According to Mike Hamman, New Mexico's state water engineer, "the low hanging fruit has already been picked in Albuquerque, so now it gets a little harder." 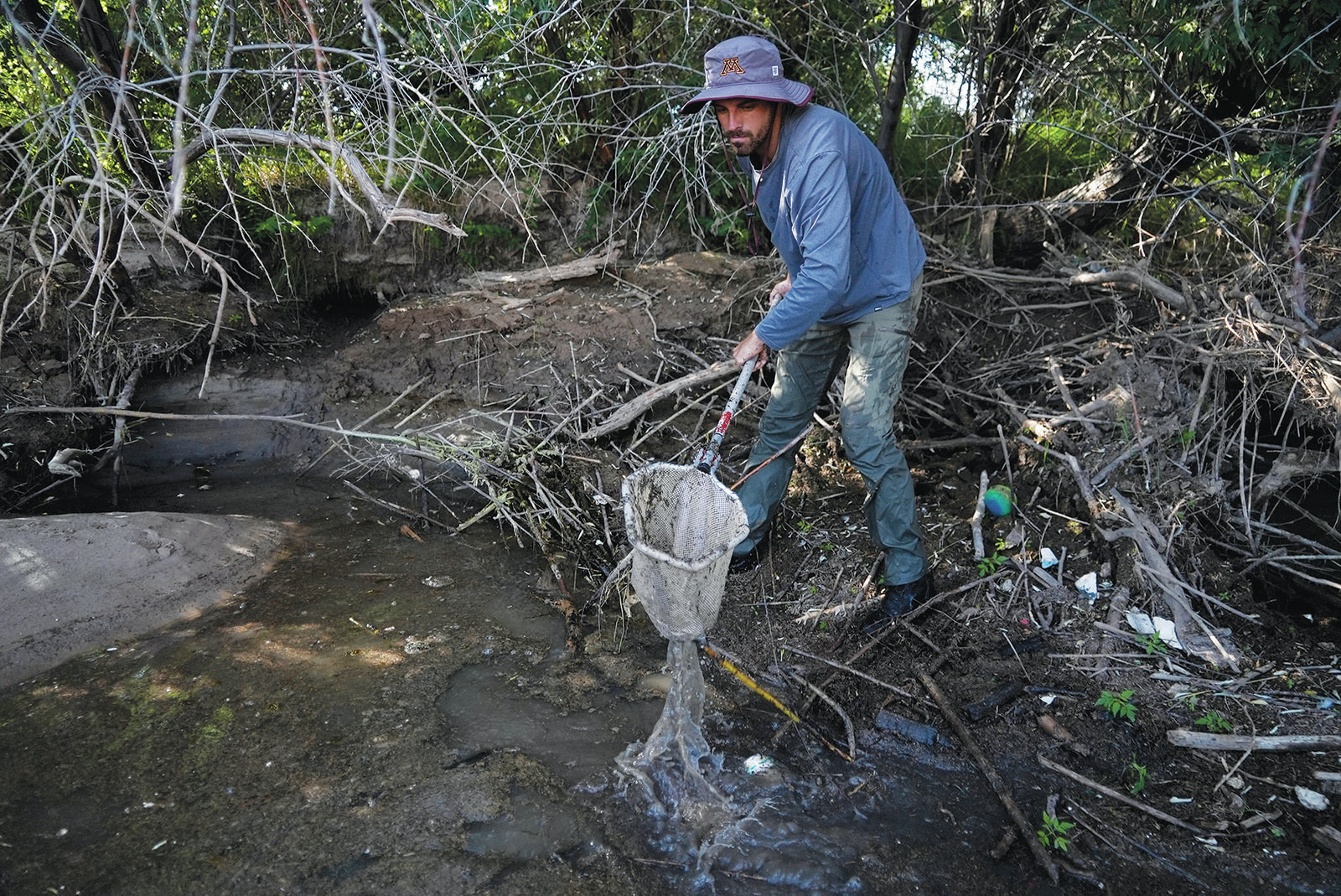 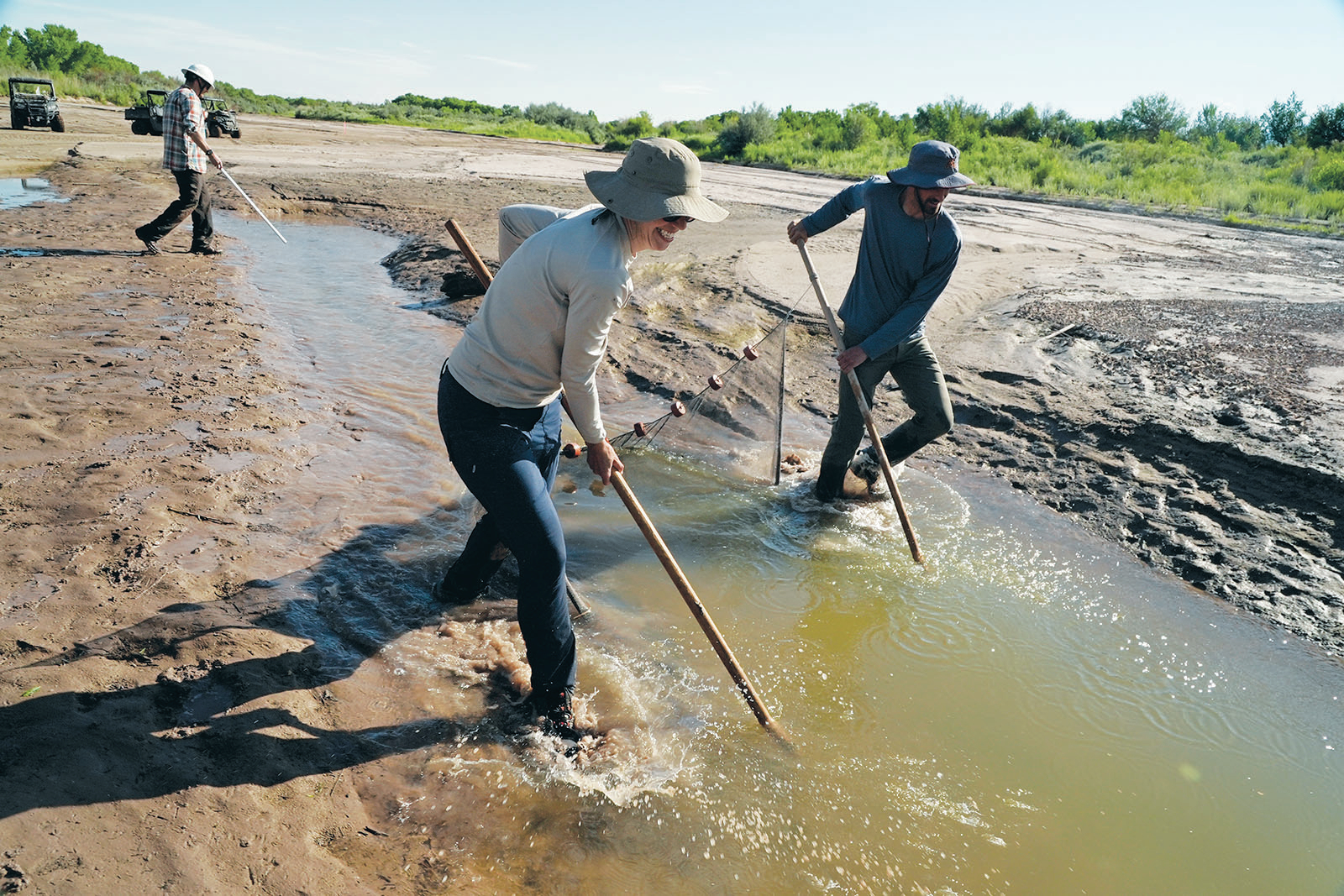 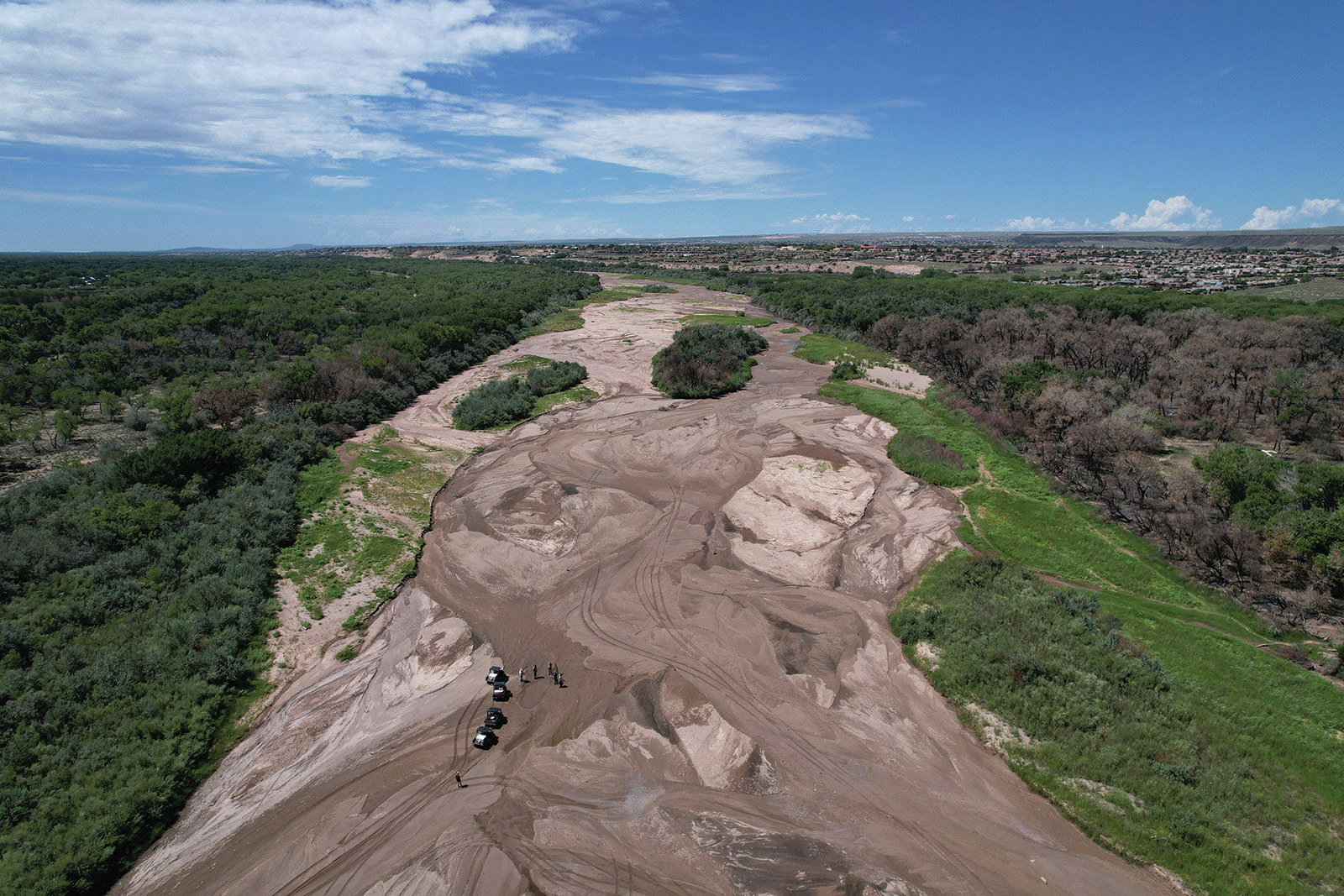 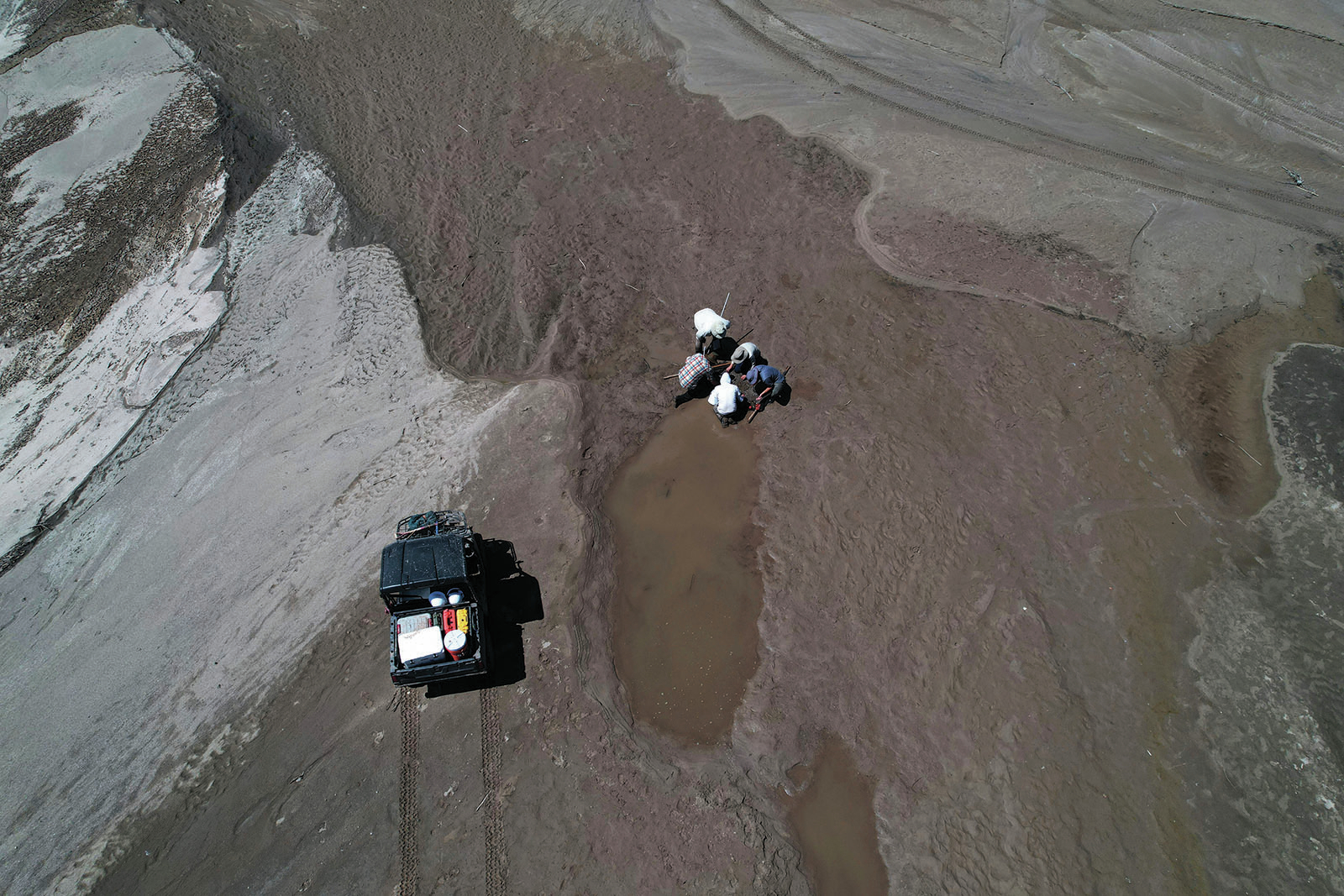 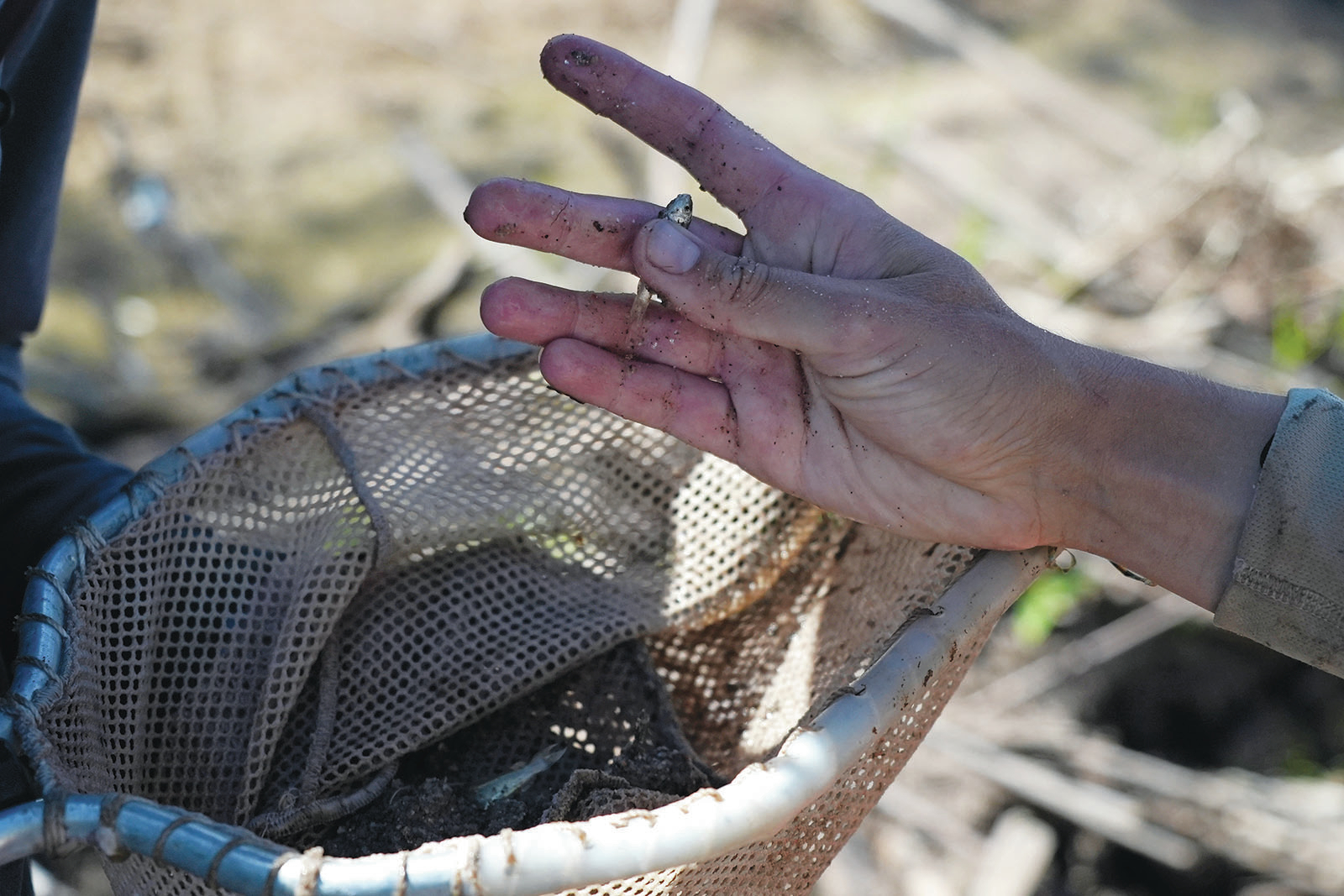 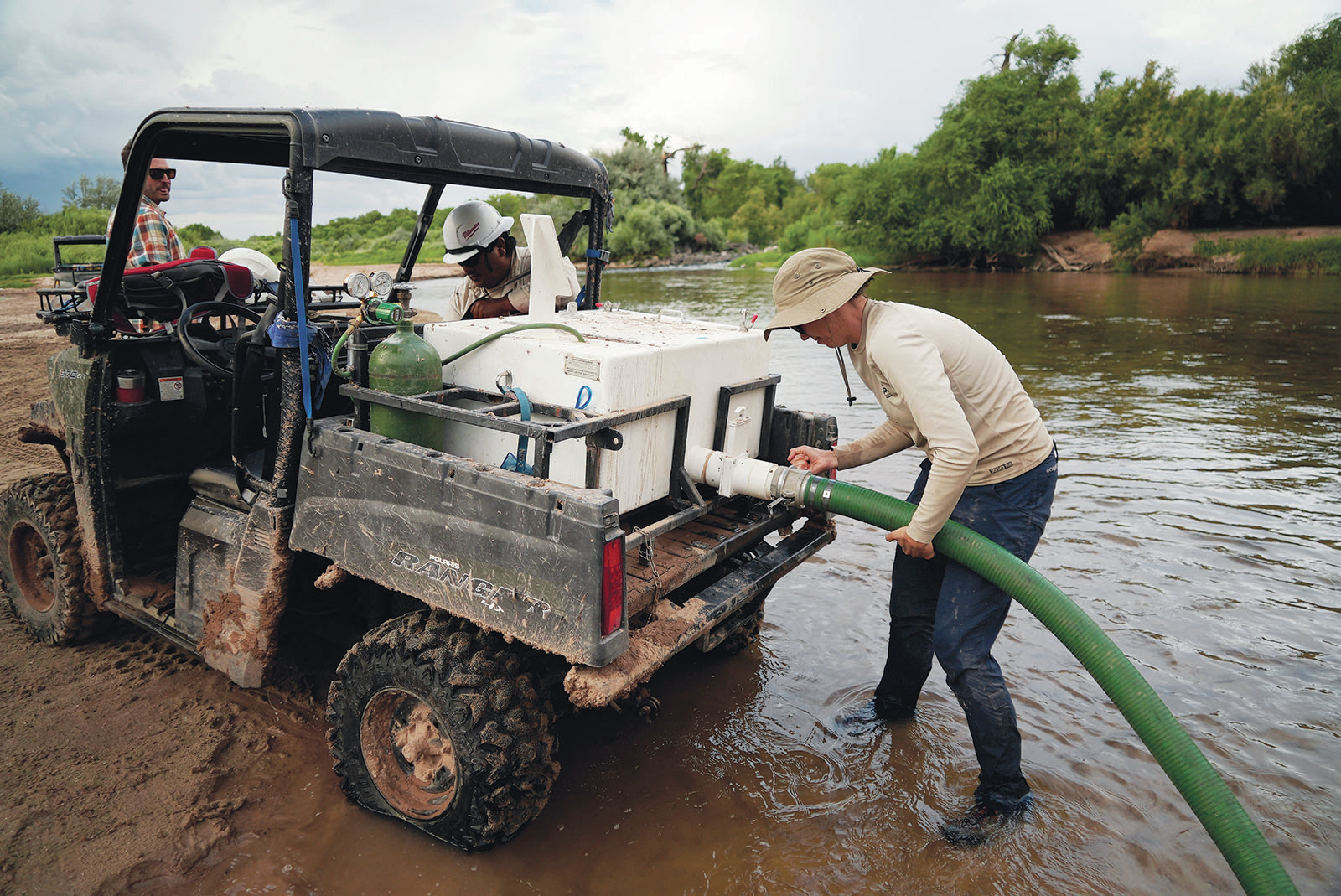 Biologists attach a hose to an oxygenated cooler July 26 before releasing rescued Rio Grande silvery minnows into a spot where the river is running again in Albuquerque, N.M. (AP/Brittany Peterson) 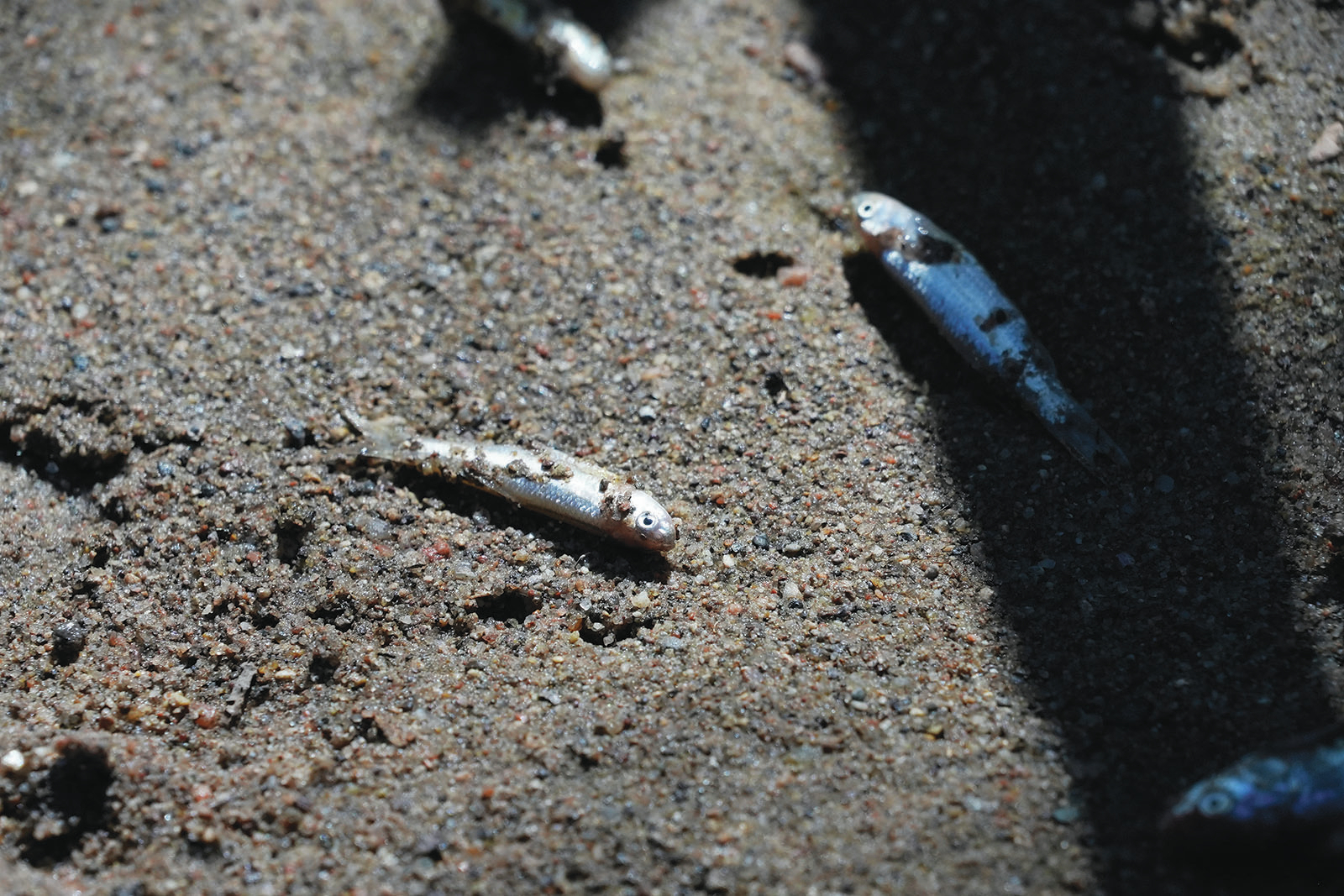 Print Headline: A race to save fish as Rio Grande dries, even in Albuquerque