WHERE I’M WRITING FROM: An author shares his work space 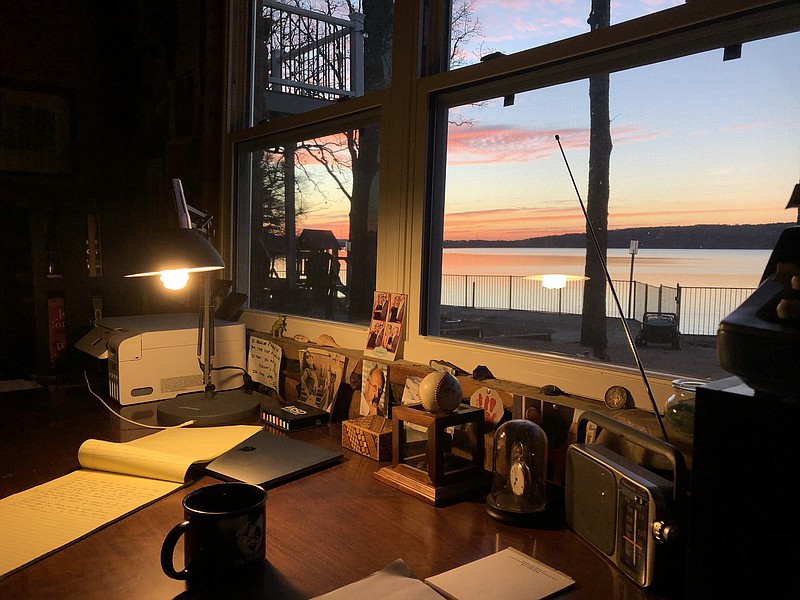 I'm writing from my office.

It's more like the idea of an office than an actual office, a place I go to dream. The room I stumble toward every morning after the alarm rings at 5. It's nothing more than a sectioned-off area in our unfinished basement. Pictures hang from the exposed studs — a faded Polaroid of Charles Portis, wedged between John Coltrane and Larry Brown. There are books stacked within the studs as well: all 42 Elmore Leonard novels. A complete collection of Flannery O'Connor's short stories. Ernest Hemingway. William Faulkner. Toni Morrison, Eudora Welty, and more.

All the old ghosts are gathered here, while the living sleep above me.

The kids will be up in two hours. Maybe less. I can already hear my wife stirring. I never glance at the clock, though. I don't have to; my window tells the time.

There's a lake out there, and a mountain; the sun is on its way up over the water. Add up Lake Dardanelle, Mount Nebo and the newly appointed "True Grit Trail" — and you can start to see the view.

There are bald eagles and great blue herons, as well as a river otter from time to time. They join me in my office, along with a dog in a red leather chair and a black cat in my lap. Each one plays a part in the morning ritual. The birds provide inspiration. The dog likes to swim with me when my two hours are up. And the cat ... well, the cat does whatever he wants.

It's a pretty good setup. I'll be the first to admit that, but things haven't always been quite so pleasant.

I've written from the backs of school buses, a coach's office in Morrilton, a classroom in Russellville, a condo in Pensacola — every sentence, every word, penned in the hopes that one day I'd be here.

I've given much thought to this place, piecing it together one memory, one hero at a time. My office serves as a passageway to new worlds, realms that I create. Most mornings, it works. My characters come to life with the sun and dance until little feet rattle the beams overhead. Sometimes, the characters like to sleep in.

This column is my attempt to transcribe all the different mornings that compose this new journey I'm on, the one I've always dreamed of — the life of a novelist.

The dream first came to me in college, while I was playing quarterback for Ouachita Baptist University and met a professor named Johnny Wink. From there, the dream flew overseas to play a season in Sweden. It got lost when I returned, hibernating as I tried my hand coaching high school football.

When I finally hung up my whistle, I devoted the same energy and discipline to writing fiction as I did my athletic career. That's where the morning routine started. Two kids, one wife, and six years later, the dream came true.

My debut novel, "Don't Know Tough," was released in March. The story centers on a high school football team in Arkansas and the murder that threatens to tear their town apart. Much like Mixed Martial Arts fighter Bryce Mitchell's famed quote — "Every time you put a mic in my face, I'm gonna say Arkansas!" — The Natural State figures heavily into my work as well.

I was born in the Delta and raised in the Valley. My parents moved our family from Forrest City to Russellville when I was 4. Since then, I've lived as far away as South Florida and Sweden, but there's no place like home.

And that's what this column feels like, a homecoming.

Charles Portis was a columnist for the Arkansas Gazette. I sent "Buddy" a copy of a short story that would eventually become the first chapter of "Don't Know Tough" in 2017. His brother Jonathan read it to him. They wrote me back and that letter hangs in my office, right above where I'm sitting now.

In the columns to come, I plan to give you a peek inside the life of a novelist. I'm headed to Jackson, Baton Rouge and Little Rock in the fall for their respective book festivals. Come spring, I'll take you on tour for my second novel, "Ozark Dogs." The columns between will be written from here, this magical space I call my office, right where I've always wanted to be.

As much as I enjoy the view and my furry companions, writing is still a lonely endeavor. I sure hope you'll join me.

Eli Cranor is an Arkansas author whose debut novel, "Don't Know Tough," is available wherever books are sold. He can be reached using the "Contact" page at elicranor.com and found on Twitter @elicranor.