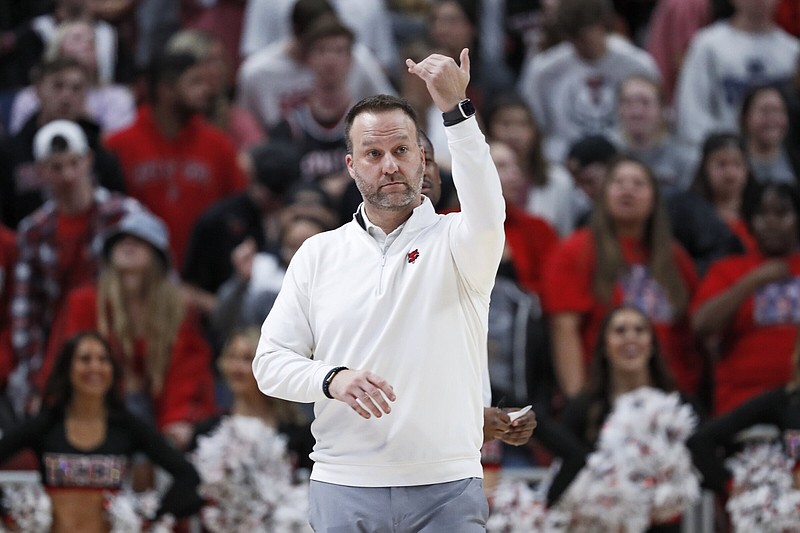 Arkansas State coach Mike Balado calls out to his players during the first half of an NCAA college basketball game against Texas Tech, Tuesday, Dec. 14, 2021, in Lubbock, Texas. (AP Photo/Brad Tollefson)

At one point Wednesday morning, he attempted to play travel agent and head coach simultaneously, scratching out practice plans for the afternoon with one hand while getting his team's itinerary settled with the other.

Such are the challenges being the only Spanish speaker in Arkansas State's men's basketball program heading into its exhibition games held in a Spanish-speaking nation.

Balado's bilingualism will be needed again over the coming days with his Red Wolves in the Dominican Republic for the program's first foreign tour since 2o13. The Red Wolves departed campus Friday morning and will play the Dominican Republic senior national team at 2 p.m. Central today in Puerto Plata -- a beach town on the island nation's northern coast that will host all three of the Red Wolves' exhibition contests.

"I'm really excited about seeing different lineups," Balado said. "I've played so many different lineups over the past seven weeks, different guys playing together. Some look better than others, but I'd like to see them against outside competition."

Putting together a starting five was rarely a worry for ASU last season. Marquis Eaton and Caleb Fields started all 29 games, with Norchad Omier, Desi Sills and Keyon Wesley filling all but nine of the other remaining starting spots.

Fields is one of seven returners, but the only one who averaged more than 20 minutes per game last season.

"It's hard because ... going from two years of having the same team, everybody knew the plays and things like that," Fields said. "You've got to be patient because everybody who's new here has only been in for a month and a half, two months."

Balado didn't give too much away on his starters, if only because he still isn't entirely sure. The sixth-year coach said he expects Fields and Markise Davis to be two of his top five, but he hinted at the possibility that one of his two freshmen -- 6-10 forward Izaiyah Nelson and 6-1 guard Terrance Ford Jr. -- could be the Red Wolves' best player.

"I wouldn't say I feel [the size], but can see it [making a difference] against somebody else," Fields said when asked about the difference of practice this summer. "There's height, and then we have a lot of talent on this team."

After opening with the 20th-ranked international team -- a group that could include former Kentucky center Eloy Vargas -- ASU will take on the Dominican Republic's select team Monday evening before closing with the host nation's under-22 team Wednesday.

In between, the Red Wolves will host a youth basketball clinic and spend time as a team visiting the beach and sightseeing.

"The Dominican Republic has always wanted up the doors for more foreign [college basketball] trips," Balado said. "There are a lot of places like Canada, Italy and Greece that a lot of people go to, but the Dominican really hasn't. It's a beautiful island.

"When we open up that door now, St. John's is going there as well. So is Samford. Hopefully, it's something where more and more college teams can go over there."