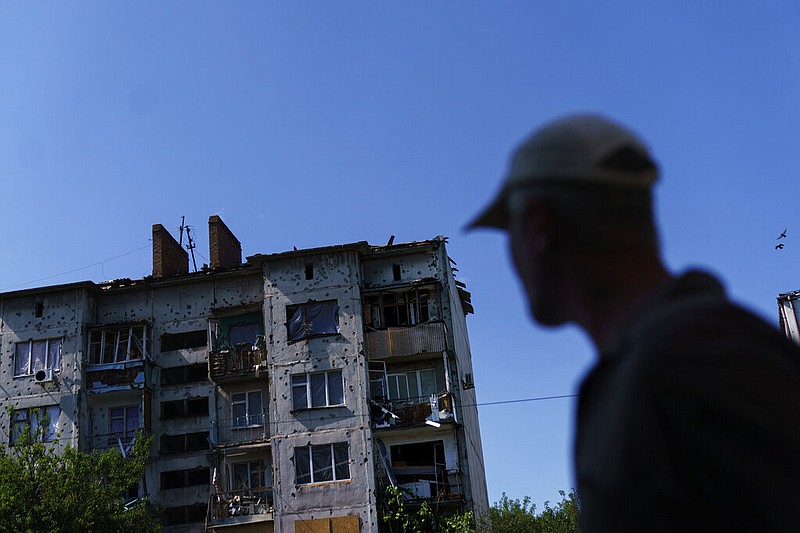 A pedestrian walks Saturday, Aug. 6, 2022, by a building damaged by a May rocket attack in Sloviansk, Donetsk region, eastern Ukraine. (AP/David Goldman)

DRUZHKIVKA, Ukraine -- Fighting raged on Saturday near a sprawling nuclear power plant in the south of Ukraine, despite warnings from nuclear-safety watchdogs this past week that conditions there were posing risks and "out of control."

The Russian military has been using the Zaporizhzhia plant, Europe's largest, as a base to assault the Ukrainian-controlled town of Nikopol across the river. On Saturday, it fired a volley of Grad rockets that damaged 11 apartment buildings and 36 privately owned houses, and wounded three people, the Ukrainian military said.

The assault also knocked out electricity, water and natural gas supplies in the town, where residents have been fleeing from the artillery attacks and attendant risk of radiation, the Ukrainian military said.

Russian forces began staging artillery attacks from the plant about a month ago, and the Ukrainian military has said it cannot shoot back because of concerns that it would hit a reactor at the plant, igniting a radiation catastrophe.

Ukraine has also accused the Russians of setting off explosions at the plant intended to unnerve European allies about nuclear safety and discourage arming Ukraine.

The Zaporizhzhia plant occupies a perilous spot on the broad Dnieper River, along the front line of the war between Russia and Ukraine. The Ukrainian army controls the west bank, while the Russians are entrenched around the plant on the river's east bank.

The battles near the nuclear plant came as clashes continued elsewhere in Ukraine, including Russian artillery and tank assaults on the eastern town of Bakhmut, the site of some of the fiercest fighting along the front in recent days.

The Ukrainian military continued striking targets far behind Russia's front lines, hoping to whittle away at ammunition and fuel supplies.

American-provided High Mobility Artillery Rocket Systems have helped shift the tide in the war. On Friday, Ukraine hit three command posts and six ammunition depots at various positions behind enemy lines along the front, it said in a statement.

Anger over nuclear-safety violations -- Rafael Grossi, head of the United Nations' nuclear watchdog, said Tuesday "every principle of nuclear safety has been violated" -- has done nothing to dislodge the Russian army from the site, and fighting has continued daily, with explosions Friday afternooon. Grossi called conditions at the plant "out of control."

Grossi said he was far more worried about Zaporizhzhia than he was about Chernobyl, the site of the 1986 nuclear disaster, also in Ukraine, that radiated the surrounding area and imperiled Europe.

"Chernobyl, I think we are fine," said Grossi, noting that his agency had inspected the plant regularly and had restored sensors for radiation monitoring and other detection devices.

But the International Atomic Energy Agency has been unable to access key parts of the reactors at Zaporizhzhia, as the occupying Russian force and surrounding shelling make it too dangerous for inspectors. That raises the prospect that if damage is done to the facility, it may be difficult, at best, to assess the danger, he added.

In a statement issued Saturday, the Ukrainian state nuclear company, Energoatom, said Russian soldiers have occupied basements at the plant and are preventing employees from sheltering in them, despite the risks from combat in the area.

"People do not have shelter and are in danger," the statement said.

Blocking access to the shelters comes atop other psychological stresses for Ukrainian workers on the reactor control room and other plant employees, who have been subjected to harsh interrogations including torture with electrical shocks, according to Ukrainian officials.

The tension poses risks of accidents by human error, the officials have said.

Friday's blasts destroyed high-voltage electrical wires, forcing the Ukrainian workers to reduce output at one of the plant's six reactors. Two others had already been idled and a third was undergoing routine maintenance.

Later in the day, a second series of explosions damaged a building on the plant's premises, according to Ukraine's state nuclear power company. The company said Russia staged the blasts; Russia's military said the attacks came from the Ukrainian side.

In his nightly address to Ukrainians, President Volodymyr Zelenskyy on Friday highlighted what he called the "brazen crime" of the Russian military using the nuclear power plant as cover.

"The occupiers created another extremely risky situation for everyone in Europe," Zelenskyy said, citing the explosions earlier in the day at the plant. "This is the largest nuclear power plant on our continent. And any shelling of this facility is an open, brazen crime, an act of terror."

An adviser to Zelenskyy, Mykhailo Podolyak, addressed the risk even more bluntly in a post on Twitter on Saturday, suggesting a disaster sending radiation wafting over Europe might occur any day.

"This morning in Europe became possible just because the Zaporizhzhia NPP miraculously did not explode yesterday," he wrote, using shorthand for nuclear power plant. He suggested that the United Nations should negotiate a Russian withdrawal from the plant that would put the site under control of an independent "special commission."

Western nations have imposed heavy sanctions on Russia for its war on Ukraine, and Zelenskyy called on them to extend those to Russia's state nuclear power company, Rosatom. The company has signed contracts with dozens of countries around the world, including China, India, Turkey and Finland, to design and build nuclear power stations.

"This is purely a matter of safety," Zelenskyy said. "The one who creates nuclear threats to other nations is definitely not capable of using nuclear technologies safely."

Grossi, director-general of the International Atomic Energy Agency, said Tuesday that the war in Ukraine was "threatening one of the world's biggest nuclear power programs," noting multiple safety violations at the Zaporizhzhia plant and describing the situation as "out of control."

"Inaction is unconscionable," he said. "If an accident occurs at the Zaporizhzhya nuclear power plant, we will not have a natural disaster to blame. We will have only ourselves to answer to."

Russia has parked an armored personnel carrier and trucks in a machine room of reactor No. 1, according to Dmytro Orlov, mayor of Enerhodar, the town that is home to the nuclear plant.

Russia's use of the site for military purposes is also intended to signal the danger of continuing Western policies of arming Ukraine, Ukraine's National Security and Defense Council said in a statement.

The council's Center for Counteracting Disinformation identified the aim as increasing "fear in Europe of the possibility of a nuclear catastrophe and reduce the desire of Western countries to provide military assistance."

In other developments, the first of three more ships carrying thousands of tons of corn from Ukraine anchored north of Istanbul on Saturday awaiting inspection, the Turkish Defense Ministry said.

The Panama-flagged Navi Star, which is carrying 33,000 tons of grain to Ireland, left Odesa on Friday. It is being followed by the Turkish-flagged Polarnet and the Maltese-flagged Rojen, carrying over 25,000 tons of corn between them from Chornomorsk.

The joint inspection center was set up to get grain blocked in Ukraine by the war to the world. On Friday, the center inspected its first north-bound ship as it headed for Chornomorsk.

In Ukraine's south, two civilians were seriously injured Saturday after Russian forces fired rockets on the Black Sea port of Mykolaiv before dawn, according to regional authorities. That followed a Friday attack on Mykolaiv that killed one person and wounded 21 others.

In the north, Ukraine's second-largest city of Kharkiv and its surrounding area also came under Russian rocket fire again overnight, according to regional governor Oleh Syniehubov. A 18-year-old in Chuhuiv, a town near Kharkiv, had to be hospitalized Saturday after he picked up an unexploded shell.

Chuhuiv and Kharkiv are near the Russian border and have endured sustained Russian shelling in recent weeks.

The neighboring Sumy region, which also borders Russia, has also seen near-constant shelling and missile strikes. Its governor said Saturday the region was hit more than 60 times from Russian territory over the previous day, and one wounded civilian had to be hospitalized.

On the ammunition front, Russia has begun using Iranian combat drones in the war, Ukrainian presidential adviser Oleksiy Arestovych said in a YouTube video, adding that Tehran had transferred 46 drones to the Russian army.

Information for this article was contributed by Andrew E. Kramer of The New York Times and by Susie Blann and Joanna Kozlowska of The Associated Press.