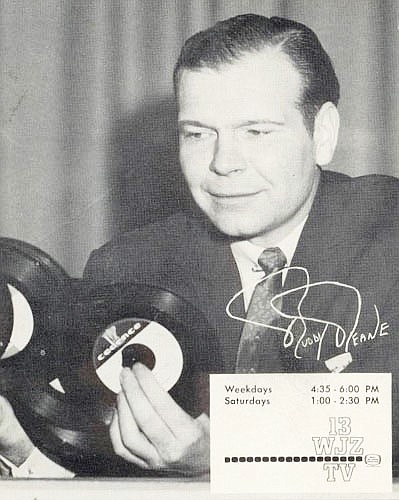 Buddy Deane, a native of Pine Bluff, was one of the first radio hosts to understand the appeal of Rock n’ Roll in its infancy, the host of a popular 60s teen dance show, the inspiration for a film and musical character in Hairspray, and so much more. (Special to The Commercial/OzNet.com/ExplorePineBluff.com)

Winston Joseph Deane was born on Aug. 2, 1924, in Pine Bluff. Nicknamed "Buddy" as a child, Deane developed an early love for radio. At just 10 years old, he and a friend set up their own radio station in a chicken coop that belonged to Deane's mother.

In 1942, Deane enrolled at Cornell University in New York. Later that year he enlisted in the Army, where he served in Europe involved in some of the most intense battles of World War II. Deane fought in the Battle of the Bulge and was awarded a Purple Heart during his time in the Europe.

In 1948, Deane married Helen Stevenson, his childhood sweetheart, whom he first met when he was just four years old. He also left the Army in 1948 and began his radio broadcast career at KLXR station in North Little Rock.

Soon after, he and his family moved to Memphis, Tenn. In 1950, Deane moved to Baltimore to host 1230 AM WITH after Stan Kenton, a performer and guest he was interviewing, informed him of the opening at the radio station. While at WITH, Deane was the first Baltimore disk jockey to capitalize on the new musical phenomenon that was rock 'n' roll. While other radio hosts thought rock 'n' roll music was just a passing trend, refusing to play it in favor of pop songs, Deane played rock 'n' roll music on a regular basis.

In 1957, Deane was chosen by former WITH associate Joel Chaseman to host "The Buddy Deane Show," a dance show for teenagers on WJZ-TV Channel 13. The show's format mirrored Philadelphia's "American Bandstand." It was broadcast for two hours a day, six days a week and featured local teenagers dancing to their favorite music played by live bands.

Baltimore teenagers rushed home to catch the show daily to listen to the popular music, watch their favorite dancers, copy their style and learn the new dances that were introduced almost every week. These dances included the Mashed Potato, the Stroll, the Pony, the Waddle, the Locomotion, the Bug, the Handjive, the New Continental and the Madison. Some of the local teens who danced on the show became local celebrities and had fans of their own.

In addition to creating teenage dancing sensations, "The Buddy Deane Show" also featured musical superstars of the day, including Buddy Holly, Domino, the Supremes, the Marvelettes, Annette Funicello, Frankie Avalon, Fabian and many others.

Almost every rock 'n' roll star except Elvis graced the Deane Show stage. The Deane Show was marketed to a predominantly white audience, but due to integration efforts and the civil rights movement of the time the show first had Black dancers appear once a month then once a week. This weekly time slot became known as "Special Guest Day" by the Deane Show's white performers and "Black Monday" by Baltimore's Black teens.

With the rising pressures of integration, the producers decided that the show must either be integrated or canceled. In meetings with the show's white performers, the producers realized that though most of the dancers were in favor of integration, their parents would not be. This assessment proved true when on Aug. 12, 1963 a group of black and white kids stormed the stage of "The Buddy Deane Show" and danced together.

Many parents and local officials were angry. The Department of Education even withdrew its support of the show, and the show had to be filmed in the parking lot at times because of the threats they received. On Jan. 4, 1964, "The Buddy Deane Show" aired its last episode. Rather than integrating, the show was canceled.

Deane hosted a morning show at WITH. On Sept. 13, 1964, he introduced The Beatles before their concert at the Baltimore Civic Center, and a few days later, he and his family moved back to Arkansas.

From 1964 to 1984, Deane hosted a show and owned KOTN-FM and KOTN-AM radio stations at Pine Bluff. Deane even dubbed himself "the morning mayor." His running joke with listeners was that he ran the town from 6 a.m. to 9 a.m. until the city's real mayor took over. His show became one of the highest rated stations in the country.

In 1984, he sold the station to a local college but bought it back in 1996. From 1996 to 2003, he hosted dance events in Baltimore, Pennsylvania and aboard cruise ships. In early 2003, Deane sold KOTN and three other stations he had acquired over the years.

John Waters, a Baltimore filmmaker and Deane Show fan, loosely based "The Corny Collins' Show" in his movie "Hairspray" on Deane's show. Deane even played a small role in the movie, which premiered to moderate success but went on to become a cult classic. The movie was eventually turned into a musical by the same name. In 2003, "Hairspray" went on to sweep the 57th Annual Tony Awards, winning a total of eight awards.

Deane died in Pine Bluff on July 16, 2003, after experiencing complications caused by a stroke. He left behind his wife, Helen Stevenson Deane; his three daughters, JoEllen, Dawn, and Debbie and their families.

This article is among features at explorepinebluff.com, a program of the Pine Bluff Advertising and Promotion Commission. Sources: www.IMDB.com -- Buddy Deane Biography; www.OzNet.com - A Collection of Articles About Buddy Deane; www.Variety.com -- Winston J. 'Buddy' Deane; www.WashingtonPost.com -- The Messy Truth of The Real 'Hairspray.' Image Credit: OzNet.com.