Plan to outline steps for historic preservation in Fayetteville 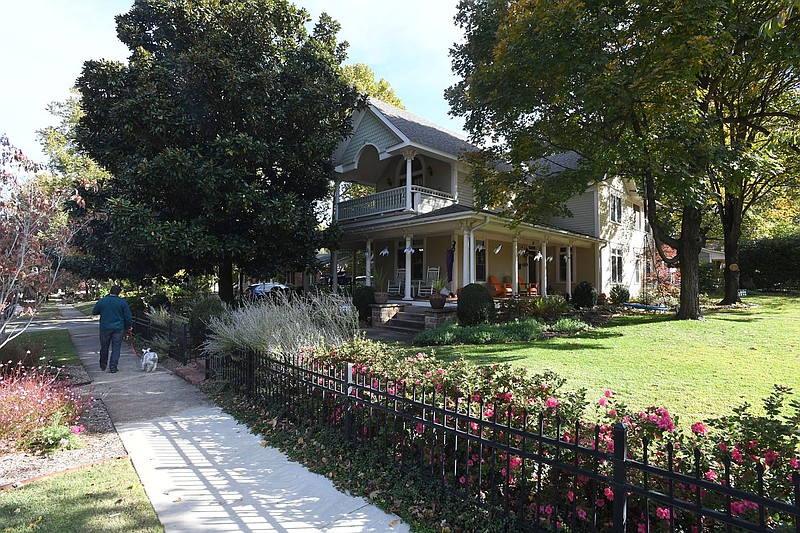 The Norman house, a Queen Anne-influenced style home constructed in 1880 with a large wrap-around porch is seen Oct. 23, 2019, at 502 N. Washington Ave., in Fayetteville. The City Council has approved a contract with a consultant to develop a citywide heritage and historic preservation master plan. (File photo/NWA Democrat-Gazette/J.T. Wampler)

The City Council on Tuesday voted 8-0 to approve a $69,610 contract with Stantec Consulting Services in Austin, Texas, to develop the plan. Money is coming from a $50,000 grant from the Arkansas Historic Preservation Program and $20,000 from the city.

Fayetteville has one property protected under a preservation zone: the World War II-era White Hangar at the municipal airport, which the city owns.

It has six neighborhoods listed under the National Register of Historic Places: Meadow Spring, Mount Nord, the University of Arkansas campus, Washington-Willow, West Dickson and Wilson Park. None of those places, however, is protected because being on the national register comes with no regulatory authority.

Residents often think because a property is listed on the national register it's protected in some way, said Britin Bostick, long range planner with the city. The state has a somewhat complicated way of granting cities the authority to actually prohibit demolition or significant alteration of structures, she said.

Fayetteville, like many cities, can find itself at a crossroads when it comes to historic preservation. On one hand, residents don't want to see historically significant structures degrade or get torn down.

On the other, some owners don't want to be told what they can and can't do with their property. Bostick said she hopes the plan will clearly outline what options are available to the city and residents when it comes to historic preservation.

"I think the best thing that could come out of this is hopefully our historic property owners and our historic neighborhoods will have a much better understanding of what that looks like, what's needed and required and how all of that works," she said.

The consulting firm will analyze the city's past preservation efforts. It also will seek resident input, according to a memorandum to the City Council. The results should help form a vision and a set of goals for preservation efforts, the council memo says.

The city tried to help establish a protective zone at the Washington-Willow historic district starting in late 2019. The proposal failed because a majority of property owners declined to sign a petition to established the zone, said Jonathan Curth, development services director.

State law says a majority of property owners within a certain boundary must agree to be part of a historic preservation zone, or local ordinance district. A local ordinance district functions similarly to an overlay district in which a city sets design standards for a particular part of town. The district can have its own unique set of regulatory measures, meaning it can be tailored for specific locations.

State grants for historic preservation can be used for a variety of purposes, said Iain Montgomery, certified local government coordinator with the Arkansas Historic Preservation Program. Conway and El Dorado used their grants for citywide plans within the last three years, he said.

A preservation zone doesn't have to be overly burdensome, Montgomery said. Cities can face a push and pull between those who want to preserve structures and those who resist regulation, but a comprehensive approach can help find consensus, he said.

"There's kind of no way around it, you've got to bite the bullet one way or another," Montgomery said. "But I would say a local ordinance district isn't all that much of a burden, especially if the people in a neighborhood are interested in keeping the structures up and keeping them looking the way they have in the past."

A wealth of information

If the Washington-Willow historic zone ordinance had passed, any property owner who wanted to significantly alter or demolish a historic structure within the district would have had to get a certificate from the city's Historic District Commission. Measures such as demolition or new construction would have had to gain commission approval. Violators could have potentially faced a fine of up to $500, which is the city's standard penalty for violating an ordinance.

The commission held several public meetings for more than a year to develop Washington-Willow's proposal. Bostick suspected the district's estimated 260 property owners presented too big a hill to climb, and preservation efforts may find success with a smaller historic neighborhood, or segment of one.

Having a heritage and historic preservation plan available for residents to clearly understand the process and the options available to them should go a long way in answering questions or allaying fears, Bostick said. For instance, a packet of information would be available to residents wanting to initiate a petition to put their neighborhood under a preservation zone, she said.

"If a neighborhood wants to create their own protective historic district, it would say, 'Here's what we need to see from the neighborhood,'" she said. "It would be very clear and easy, not something I would have to have 43 phone calls on and send out a dozen and a half emails."

Residents in the University Heights neighborhood west of the University of Arkansas campus have expressed interest in pursuing a listing on the national register and possibly some kind of preservation district. Older homes early in the neighborhood's history were built in a vernacular style, meaning without professional guidance. After World War II, homes on and near Hotz Drive were built in a variety of styles as soldiers returned home, said Ethel Simpson, a University Heights resident who worked 30 years in the special collections department of the University of Arkansas library system. Styles ranged from 1950s-era ranch to frame houses. Some became more interesting design-wise as well-known architects such as E. Fay Jones, John Williams and Cyrus Sutherland arrived, she said.

Perhaps more significant than the structures at University Heights are the people who lived there, Simpson said. Joy Pratt Markham and Evangeline Archer, whose family Markham Hill and Pratt Place Inn are named after, were important personalities in the community who supported many cultural and environmental developments through the years, Simpson said. Scientists, writers, historians, lawyers, political figures and university administrators alike have called University Heights home, she said.

"I sincerely believe that these qualities do represent a distinctive neighborhood and deserve to be recognized," Simpson said.

Council Member Teresa Turk once served on the Historic District Commission and said she's been trying to get a citywide preservation plan for about a decade. Bringing in a third-party expert to look at the city's historical assets and present them in a digestible manner for residents will help spread that knowledge all over town, she said.

The more information that's available and easy to understand, the better conversations residents can have about what's worth preserving and what regulations are possible, Turk said.

"Having information about what historic resources we have here is going to be extremely helpful in planning," she said. "It's one thing for someone to say, 'That house over there is so cool, I think it was built in the 1920s.' It's another thing for the consultants to come in and say, 'That was built in 1890, and it's got this kind of important architecture and decoration, and so-and-so lived there, too.'"