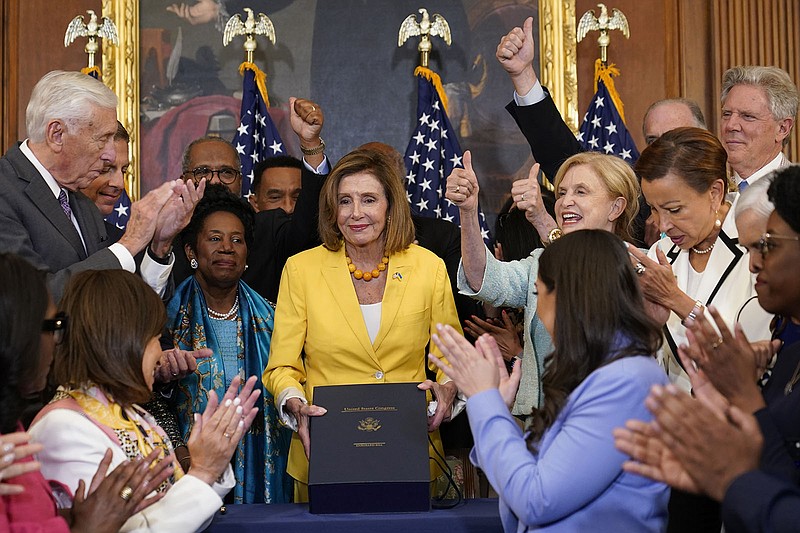 House Speaker Nancy Pelosi celebrates with fellow House Democrats on Friday during a bill enrollment ceremony on Capitol Hill. The legislation “meets the moment, ensuring that our families thrive and that our planet survives,” Pelosi said. (AP/Susan Walsh)

The House used a party-line 220-207 vote to pass the legislation, prompting hugs among Democrats on the House floor and cheers by White House staff watching on television. "Today, the American people won. Special interests lost," tweeted the vacationing Biden, who was shown beaming in a White House photo as he watched the vote on TV from Kiawah Island, S.C. He said he would sign the legislation next week.

The measure is but a shadow of the larger, more ambitious plan to supercharge environment and social programs that Biden and his party unveiled early last year. Even so, Democrats happily declared victory on top-tier goals such as providing Congress' largest-ever investment in curbing carbon emissions, reining in pharmaceutical costs and taxing large companies, hoping to show they can wring accomplishments from a routinely gridlocked Washington that often disillusions voters.

"Today is a day of celebration, a day we take another giant step in our momentous agenda," said House Speaker Nancy Pelosi, D-Calif., who minutes later announced the final vote as she presided over the chamber. She said the measure "meets the moment, ensuring that our families thrive and that our planet survives."

Other Democrats emphasized that they have delivered on long-held promises to voters, even though it could take years to see the benefits from some of the longer-term proposals.

"They're seeing Democrats as the party that's actually getting this stuff done and everyone else is trying to start a culture war or attacking the FBI," said Rep. Tim Ryan, D-Ohio, who is running for the Senate. "The contrast in the last few months is becoming very stark."

Some progressives acknowledged that they were disappointed that many of the priorities had been left out. But on Capitol Hill, they argued that without their influence, the package would have shrunk further and that it could now be used as a promise for what a larger Democratic majority could accomplish in Washington.

"We insisted that this Democratic majority deliver," Rep. Pramila Jayapal, D-Wash., chair of the Congressional Progressive Caucus, said at a jubilant news conference. She added, "We just need a couple of Democratic senators to make the rest of that agenda a reality."

Republicans solidly opposed the legislation, calling it a cornucopia of wasteful liberal daydreams that would raise taxes and families' living costs. They did the same Sunday but Senate Democrats banded together and used Vice President Kamala Harris' tiebreaking vote to power the measure through that 50-50 chamber.

"Democrats, more than any other majority in history, are addicted to spending other people's money, regardless of what we as a country can afford," said House Minority Leader Kevin McCarthy, R-Calif. "I can almost see glee in their eyes."

Arkansas Congressman Steve Womack also voted against the bill, saying it shows that Democrats are out of touch with the nation's needs.

"The unadulterated facts of this bill are clear," he said in a statement. "As 40-year-high inflation crushes Americans, Democrats are hiking taxes, supercharging the IRS to audit middle-class families and small businesses and spending billions to implement their Green New Deal agenda. Tree equity and subsidies for new luxury electric vehicles will do nothing to help everyday people struggling to pay for gas and groceries."

Still, the final legislation remained substantive. Its pillar is about $375 billion over 10 years to encourage industry and consumers to shift from carbon-emitting to cleaner forms of energy. That includes $4 billion to cope with the West's catastrophic drought.

A number of Republicans took to the floor Friday to lambaste Democrats' programs to respond to global warming. Rep. Lauren Boebert of Colorado at one point said lawmakers were "sacrificing American families at the altar of climate change."

In total, though, Democrats stressed that their climate-related spending would reduce emissions by 40% below 2005 levels by the end of the decade. And they pointed to a raft of extreme weather events as they made the case for aggressive action.

"All of the experts are saying we're very close to the point of no return. If we don't do something soon, we might not be able to save the planet," said Rep. Bobby Scott, D-Va., chairman of the Education and Labor Committee.

Another $64 billion would help 13 million people pay premiums over the next three years for privately bought health insurance. Medicare would gain the power to negotiate its costs for pharmaceuticals, initially in 2026 for only 10 drugs. Medicare beneficiaries' out-of-pocket prescription costs would be limited to $2,000 starting in 2025, and beginning next year would pay no more than $35 monthly for insulin, the costly diabetes drug.

"For as long as I have been running for office, people have been coming to me with concerns for the price of prescription drugs. The fact I can say, 'We have heard you, we have taken a step forward,' is important," said Rep. Abigail Spanberger, D-Va., a moderate running in a competitive race this November.

The bill would raise around $740 billion in revenue over the decade, more than a third from government savings from lower drug prices. More would flow from higher taxes on some $1 billion corporations, levies on companies that repurchase their own stock and stronger IRS tax collections. About $300 billion would remain to defray budget deficits, a sliver of the period's projected $16 trillion total.

Against the backdrop of GOP attacks on the FBI for its court-empowered search of former President Donald Trump's Florida estate for sensitive documents, Republicans repeatedly savaged the bill's boost to the IRS budget. That's aimed at collecting an estimated $120 billion in unpaid taxes over the coming decade, and Republicans have claimed the IRS will hire 87,000 agents to target average families.

Rep. Andrew Clyde, R-Ga., said Democrats would also "weaponize" the IRS with agents, "many of whom will be trained in the use of deadly force, to go after any American citizen." Sen. Chuck Grassley, R-Iowa, asked Thursday on "Fox and Friends" if there would be an IRS "strike force that goes in with AK-15s already loaded, ready to shoot some small business person."

Few IRS personnel are armed, and Democrats say the bill's $80 billion, 10-year budget increase would be to replace waves of retirees, not just agents, and modernize equipment. They have said typical families and small businesses would not be targeted, with Treasury Secretary Janet Yellen directing the IRS this week to not "increase the share of small business or households below the $400,000 threshold" that would be audited.

Republicans say the legislation's new business taxes will increase prices, worsening the nation's bout with its worst inflation since 1981. Though Democrats have labeled the measure the Inflation Reduction Act, nonpartisan analysts say it will have a barely perceptible impact on prices.

The GOP also says the bill would raise taxes on lower- and middle-income families. An analysis by Congress' nonpartisan Joint Committee on Taxation, which didn't include the bill's tax breaks for health care and energy, estimated that the corporate tax boosts would marginally affect those taxpayers but indirectly, partly due to lower stock prices and wages.

"House Democrats ensured voters will fire them this fall," said spokeswoman Torunn Sinclair of the House GOP campaign committee. In an email, she listed dozens of Democrats in competitive re-elections who will face Republican attacks for raising taxes and empowering the IRS "to target their constituents."

Democratic-leaning interest groups had their own warnings. "We'll ensure that every Republican who voted against this bill is held accountable for prioritizing polluters and corporate special interests over the health and well-being of their constituents," said Tiernan Sittenfeld, a top official of the League of Conservation Voters.

The bill caps three months in which Congress has approved legislation on veterans' benefits, the semiconductor industry, gun checks for young buyers, Ukraine's invasion by Russia and adding Sweden and Finland to NATO. All passed with bipartisan support, suggesting that Republicans also want to display their productive side.

A new analysis released Friday by the Penn Wharton Budget Model offered a mixed review of the bill: The report found it would reduce the deficit by about $264 billion over the next decade, less than some Democrats hoped, with an effect on inflation that is "statistically indistinguishable from zero."

"Americans are suffering. Are we here debating how to alleviate that suffering? No," said Rep. Jason Smith of Missouri, the top Republican on the House Budget Committee, adding that the bill would not "put out the fire of inflation."

Republicans have suggested in recent days that a GOP majority in the next Congress could try to roll back the legislation, much as it tried repeatedly to do to the Affordable Care Act adopted under President Barack Obama in 2009. Rep. Steve Scalise, R-La., the House minority whip, pledged this week that his party would soon be "rolling out an agenda that will reverse" the bill.

But Democrats seemed to welcome such a threat. In a briefing with reporters Thursday, a senior White House official said the outcome would help the party hone its new message to voters: Democrats are helping ordinary Americans, while Republicans are extremists beholden to special interests and former president Donald Trump.

Information for this article was contributed by Alan Fram, Seung Min Kim and Lisa Mascaro of The Associated Press; by Emily Cochrane of The New York Times; and by Tony Romm and Cleve R. Wootson of The Washington Post. 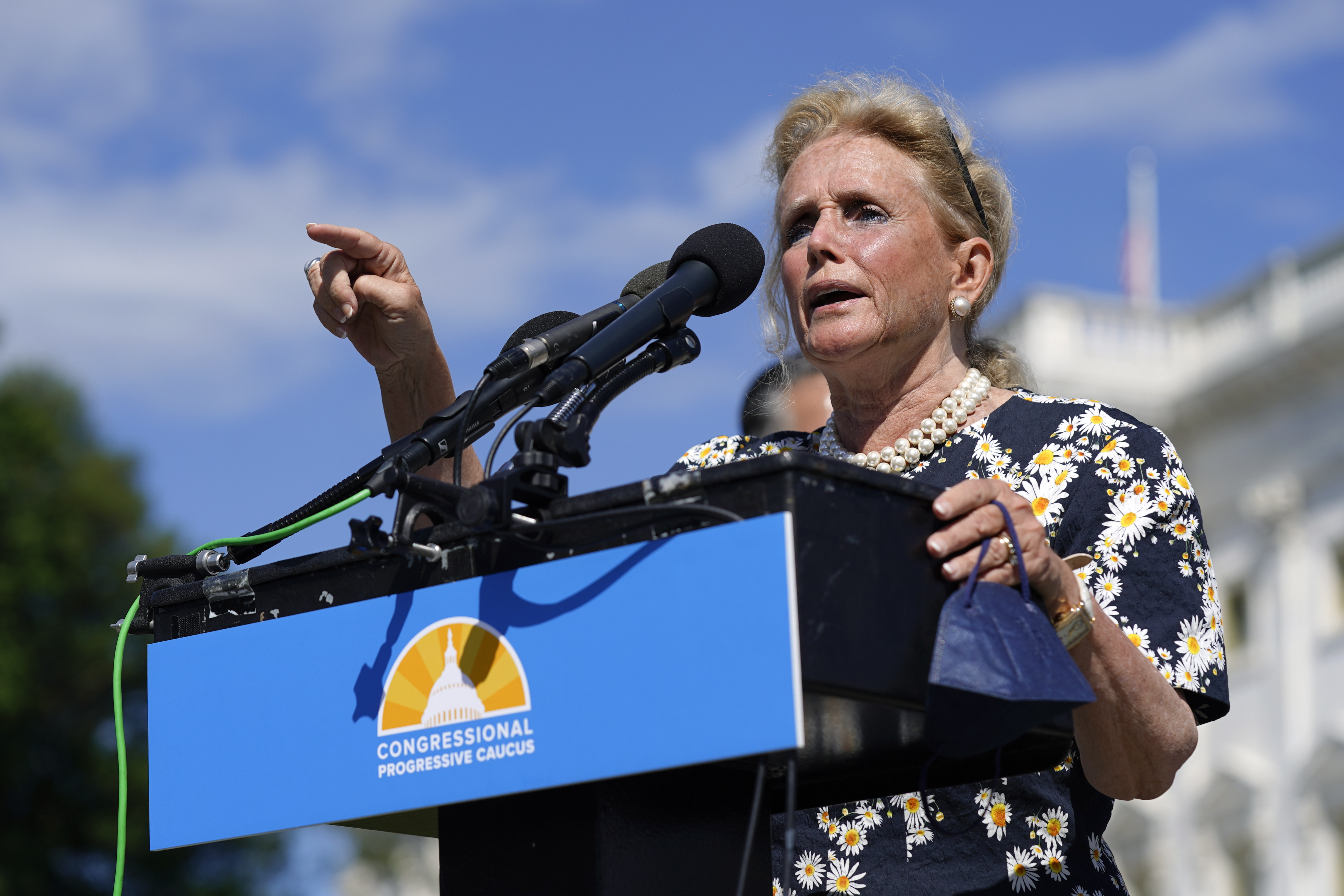 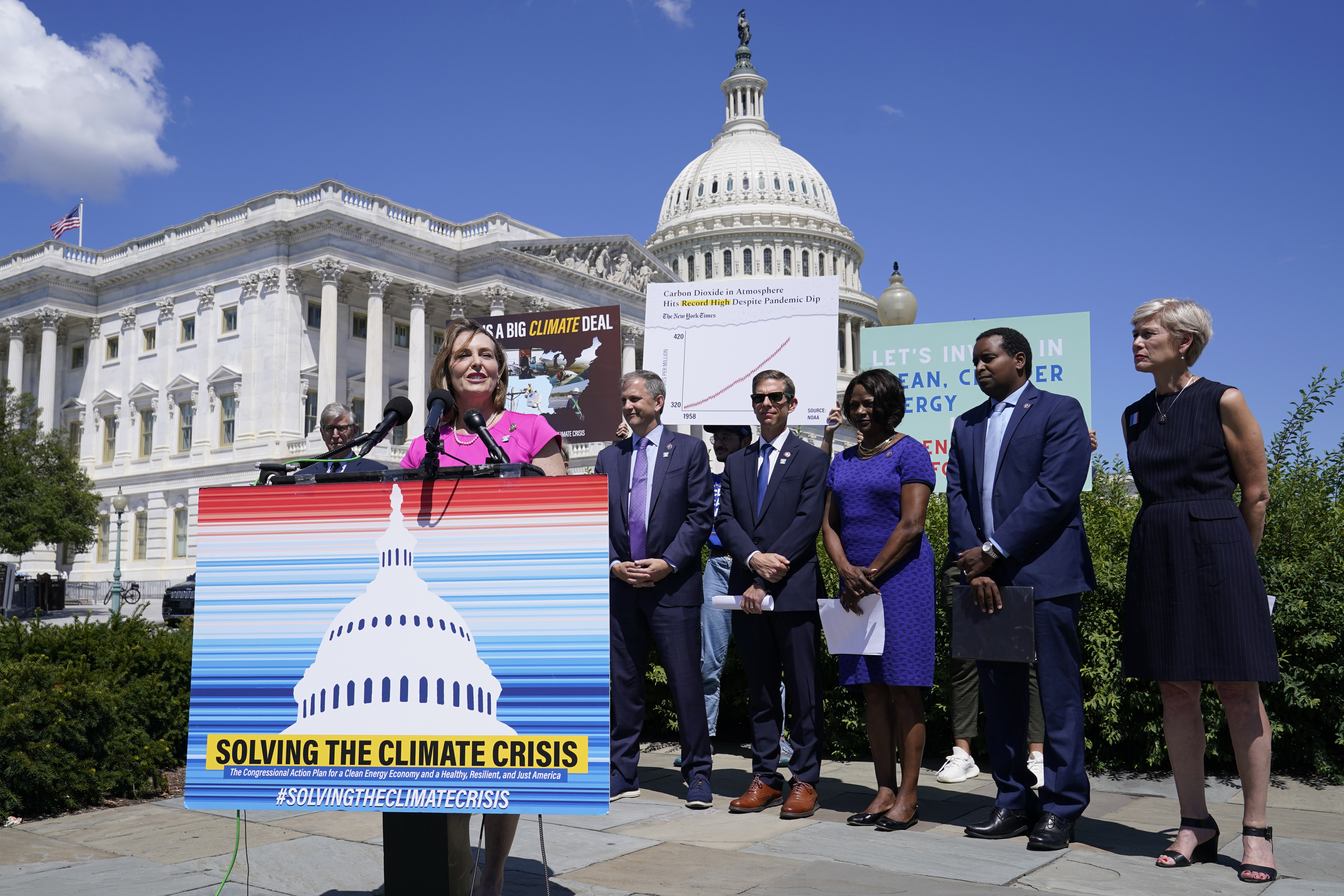 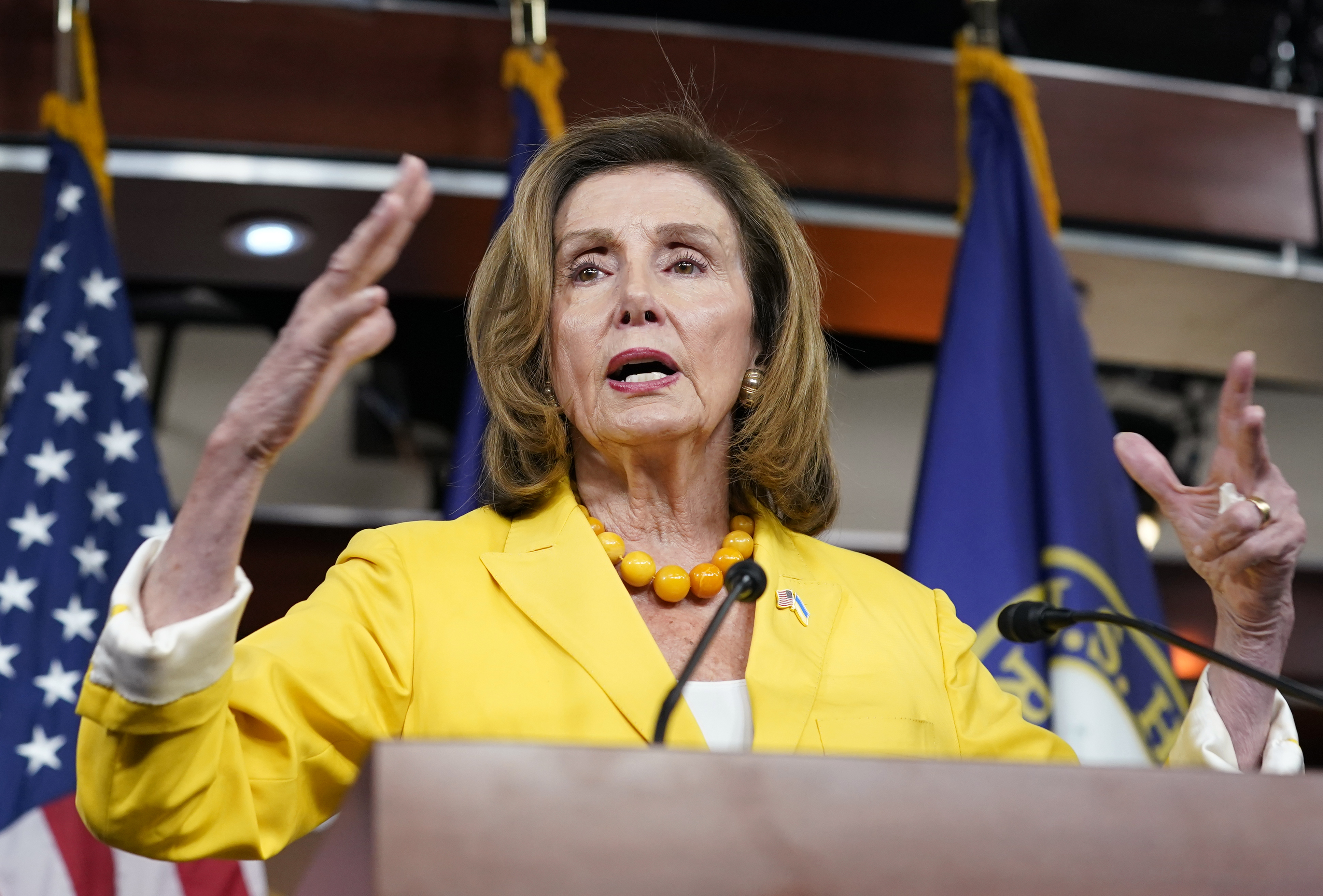 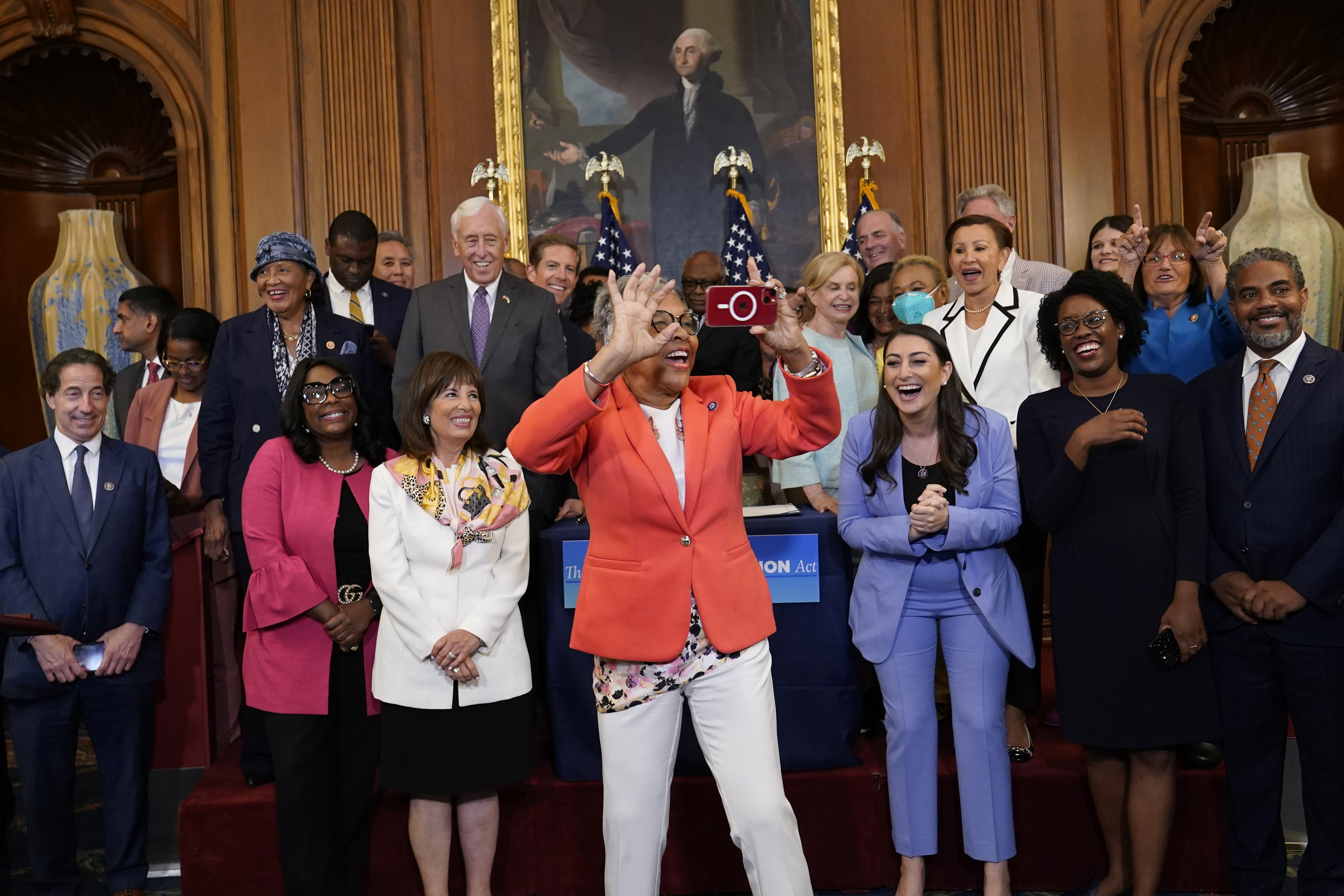 Rep. Joyce Beatty, D-Ohio, center, takes a photo before the start of a bill enrollment ceremony with House Speaker Nancy Pelosi of Calif., for the Inflation Reduction Act of 2022 on Capitol Hill in Washington, Friday, Aug. 12, 2022. (AP Photo/Susan Walsh) 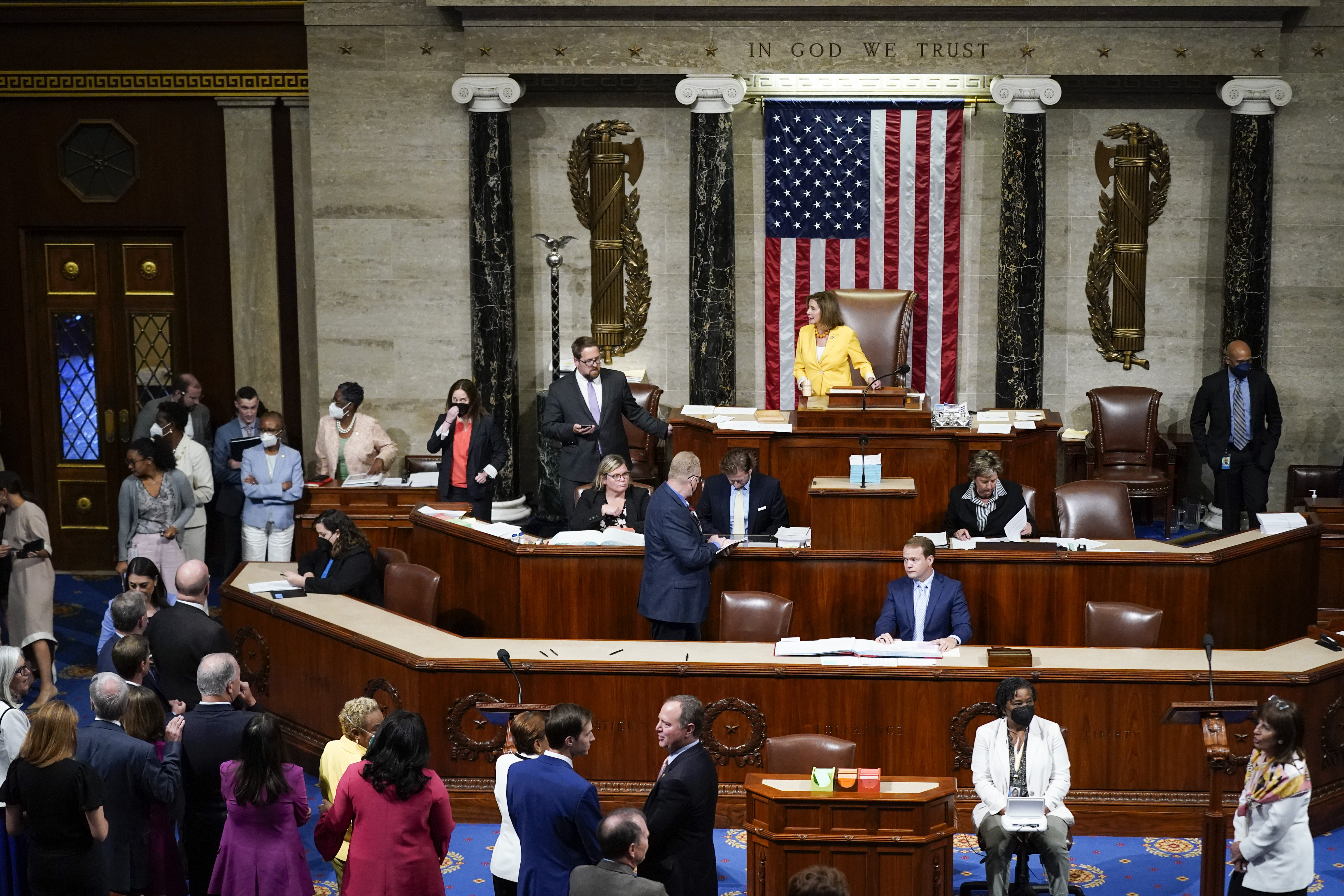 House Speaker Nancy Pelosi of Calif., leads a vote on the Inflation Reduction Act in the House chamber at the Capitol in Washington, Friday, Aug. 12, 2022. (AP Photo/Patrick Semansky) 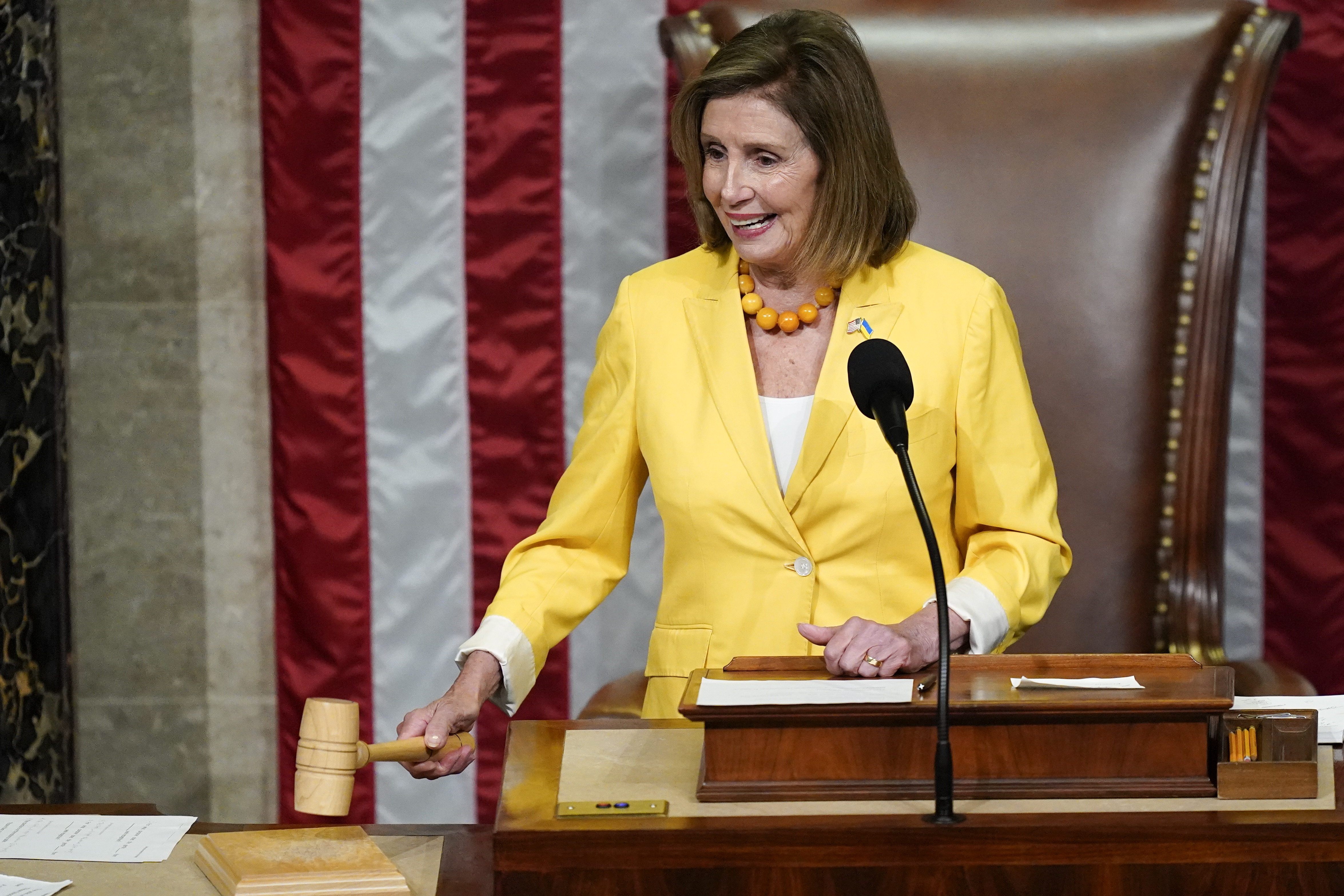 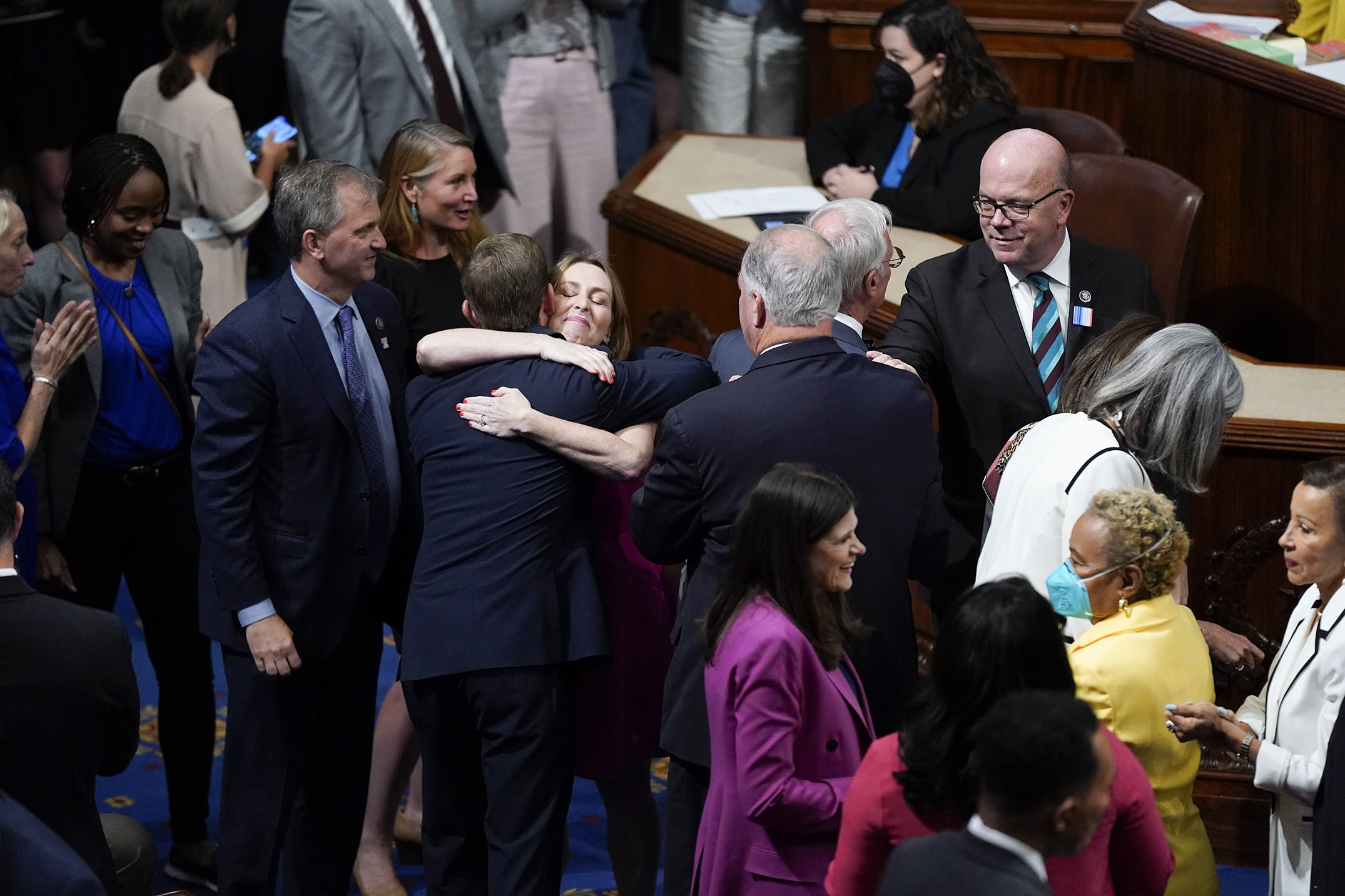