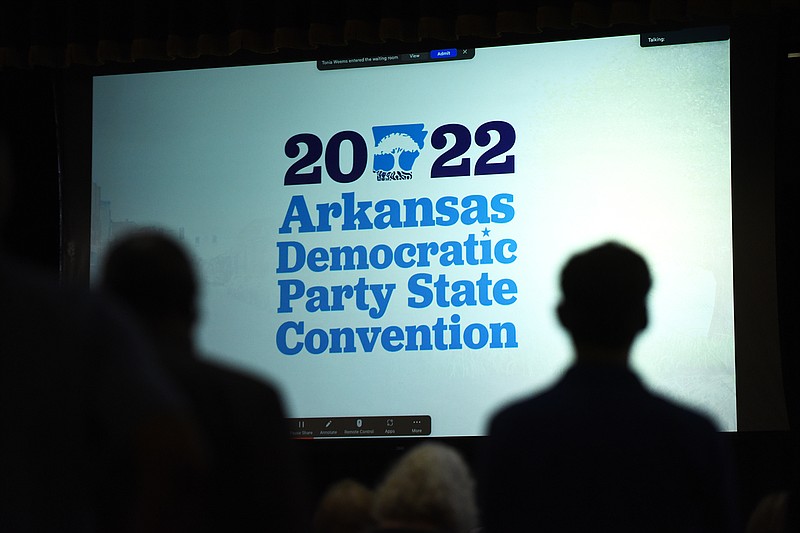 People gather in the Ida Waldran Auditorium on Saturday for the Democratic Party of Arkansas’ biennial State Convention at the University of Arkansas campus in Conway. (Arkansas Democrat-Gazette/Staci Vandagriff)

Hope and unity were the messages at the Arkansas Democratic Party state convention, but candidates also conveyed a sense of urgency when it comes to getting more representation at the Capitol with particular emphasis on the race for governor.

Democratic gubernatorial nominee Chris Jones said he believes his message of unity and modernizing the state's economy will be the key to beating his Republican opponent as their first debate draws near.

"Let's come together and make our choice and lift our voice," Jones told the crowd of several hundred people who gathered Saturday at the University of Central Arkansas for the Arkansas Democratic Party state convention in Conway.

"Let us all be a part of the fight and choose community instead of chaos," Jones said. "Arkansas needs us now."

Delegates to the Democratic Party of Arkansas state convention also voted Saturday to accept a platform that states Democrats are working for a healthier, safer, fairer and brighter Arkansas.

A common theme during the event was officials speaking about the renewed sense of hope amongst the party because of their united effort the past few weeks to bring teacher pay to the forefront during previous special session.

"I hope you guys all noticed this," Grant Tenille, chairman for the Democratic Party of Arkansas said about the united effort between activists, teachers and Democratic leaders. "The sand has started to shift beneath our feet."

Tennille said he wanted to personally introduce Jones at the event Saturday because he believed in his message.

"He has a vision for this state and this vision includes every single one of us," he said. "He is ambitious for us. He knows that we can do better and he knows how to lead us there, and he will if we can get him elected."

Most of the speakers at the event spoke about a renewed sense of optimism around the Democratic Party but also spoke about the desperate need to win this upcoming election, starting off with Jones becoming governor.

"We are going to tell the Chris Jones story to everyone," Tenille told the audience. "We can't afford not to."

Jones said Arkansas is currently facing strict public mandates that infringe on individual rights, has some of the lowest pay for educators, and has children going hungry, but this can all change in the upcoming election.

"Never has an election in Arkansas mattered so much," he said.

Jones said the state can become one of the best in the nation, and he believes his campaign's "PB&J" agenda of preschool, broadband and jobs are an answer to the issue.

Jones said he also wants to bolster new industries coming into the state as well as marketing small and medium size cities for investment.

"Arkansas can be ready for a modern economy, but we need the right leaders," he said.

Jones also took moments in his speech to personally attack the Republican gubernatorial nominee, Sarah Huckabee Sanders, calling her an agent of chaos and questioning her platform throughout the speech.

Sanders has previously said she is a proponent of phasing out the state income tax to help the state even out the "competitive playing field" when it comes to other states in the region and even the global economy.

"She is wanting eliminate 55% of our state revenue, but won't tell us what she will gut to achieve this," he said. "Will it be police? Education? Rural health?"

Jones said Sanders' campaign is about creating division and distrust.

"The former president's mouthpiece is not going to use Arkansas as a stepping stone to a higher office," he said. "We have a choice."

Sanders tweeted Friday that "I look forward to speaking with Arkansans in every corner of the state by participating in Arkansas' only statewide debate hosted by @ArkansasPBS on Friday, Oct. 21 and sharing my message of freedom and opportunity for all."

Jones told the Arkansas Democrat-Gazette they were in negotiations to do a debate, but he learned about the date of the debate when Sanders tweeted it out.

"I am glad because it's an opportunity to share our vision and for voters to see the contrast," he said. "We knew that it would happen that week because we received an offer saying, hey do you want to do it sometime that week. I didn't know it was the 21st until she posted it. That's the news to me. I was like, 'Oh did we decide on a date?' And I am not convinced we did. So who knows?"

Jones said his strategy going into the debate is to be ready and remember why he is running.

"At the end of the day it's not about Sarah. It's not about me. It's about who is going to serve Arkansans when they can't be in the room to make decisions," he said.

Sanders' campaign said Saturday that she had no comment on Jones' statements.

The state Democratic Party platform stressed that that the party is "working for a better Arkansas," and that means improved health care options, better roads and bridges, less crime in communities, a world class education and rights protected for everyone.

Several members of the delegation mentioned their concern about the lack of transgender terms in the platform.

Rep. Megan Godfrey, D-Springdale, chair of the Platform Committee, said they wanted to make the platform terms as broad as possible to allow them to focus on the specifics in policy movements and goals.

"This gives us the framework under Fair Arkansas to have the latitude to be more specific as specific challenges arise," she said.

Among other things, the state Democratic platform approved recommendations supporting legal recreational marijuana and expunging the records of those arrested for marijuana-related crimes, as well as fair, liveable teacher wages.

"Thank you for passing this platform because nobody can argue with safer, healthier, brighter and fairer Arkansas," Rep. Tippi McCullough, D-Little Rock, said. "All of the things that we believe in is in this platform, whether its spelled out or not. It also gives us, all of us, but especially legislators, a framework and message. It's easy to remember, it's catchy and people all over the state will be able to use it."

Democrats have been dealing with a Republican supermajority in the General Assembly, and officials for the party said they are hopeful that the tide is about to swing the other way for them.

"Over the past month, our party, activists and many classroom teachers have come together to scream. And for the first time in many many many years, we did it with one voice," Tennille said. "We were united. We stuck together. We never backed down and we pushed each other to keep moving forward."

Tennille said this has already shown results with Sanders announcing she was going to participate in the debate against Jones.

"We put her back up against the wall and she can't wiggle out," Tennille said. "And its just the beginning, and we are not going to stop."

McCullough also said it was important for Democrats to hold on to the seats they currently have in the House. She said this election cycle six Democratic incumbents have Republican opponents.

"I am just hitting the pause button, not the stop button," Godfrey said to cheers. "Y'all haven't seen the last of me yet."

Ingram said there is no litmus test to get into the Democratic Party and that is the reason why he has always been a Democrat.

"That is what makes our party special," he said. "Because we are here to serve. We are big tent and we all need to listen to each other and together promote ideals that are consistent in our values."

"Our party will never contain insurrectionists that want to overthrow our government," Ingram said as the crowd cheered. "I am proud of what Democrats have accomplished. Each one of us in this room can feel the momentum we have right now. We are more professional and organized than we have been in years. As I am leaving, I know the future is very bright."

Tennille said Elliott has been the conscience, heart and soul of the Democratic Party for many years.