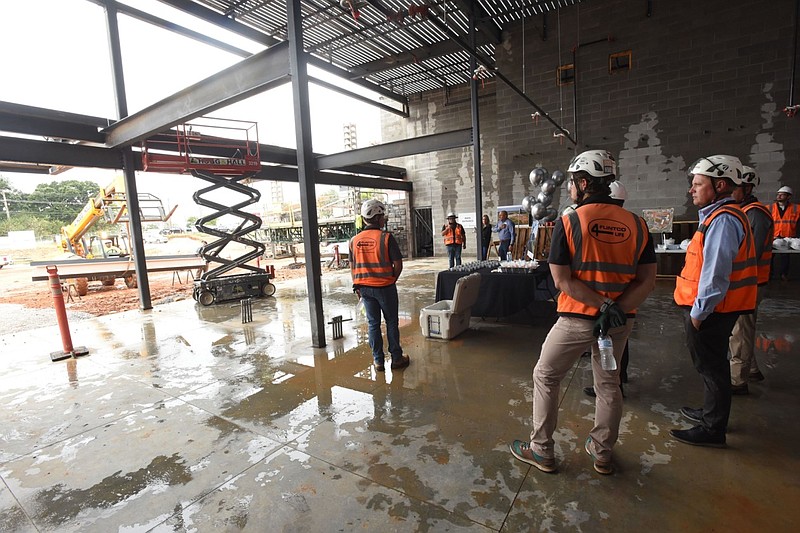 Construction workers, along with Bentonville school district officials and city officials, watch a beam being raised to bolt it into place during a topping-out ceremony at a new Bentonville elementary school at 5301 S.W. Barron Road in this Sept. 21, 2021 file photo. (NWA Democrat-Gazette/Flip Putthoff)

"In my opinion, what we are seeing is an unprecedented inflation spike in construction costs that I believe can be defined as unusual and unprecedented," Cain said.

Cain brought up the state rule that allows timeline waivers Wednesday as a follow-up to an issue first raised in April.

Cain last spring told the commission -- chaired by Arkansas Education Secretary Johnny Key -- that nonresidential building costs and costs of new construction by the square foot increased by 19% to 21% from December 2020 to December 2021.

Districts with approved projects for state aid are being negatively affected, he said.

Lawmakers created the Partnership Program, in which the state shares in the cost of building academic spaces, in 2006 to modernize public schools. That was done in response to a state Supreme Court decision that had declared Arkansas' public schools inequitable, inadequate and unconstitutional.

Earlier this year, the state commission approved the distribution of $92.2 million in state aid for 58 building projects in 45 Arkansas school districts.

A Partnership Program Project agreement must be executed by a school district and the facilities division within 60 days of the commission's vote of approval of the funding.

Typically, the project must be under construction -- as shown with a signed contract -- within 18 months from the commission's approval and must be completed and requests for state reimbursement submitted within four years of the commission's funding.

On Wednesday, Key asked Cain if any districts have requested extensions of time to start and complete projects.

Not officially, Cain said, but added that he has had several conversations with school district superintendents about the possibility of waivers. He said he anticipates that the need for waivers of deadlines may extend beyond this 2021-2023 cycle of state funding for projects into the coming 2023-2025 cycle.