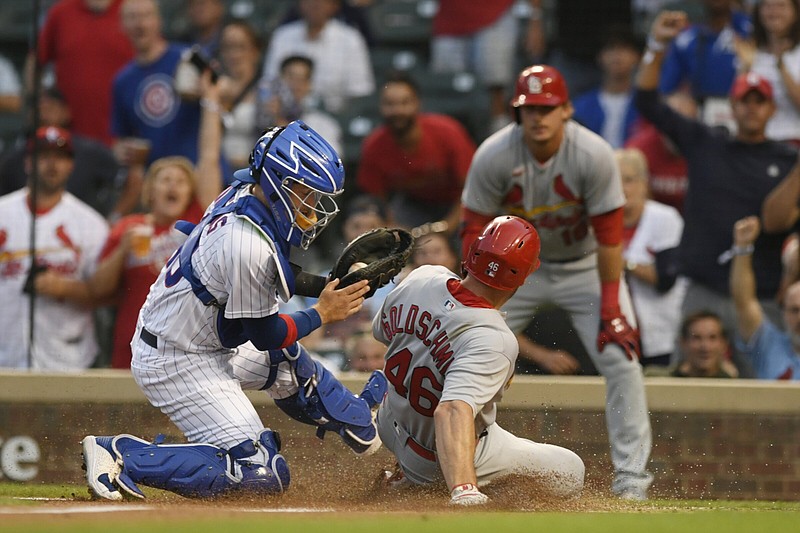 Chicago Cubs catcher P.J. Higgins (left) tags out St. Louis Cardinals first baseman Paul Goldschmidt at home plate Tuesday during the first inning of the Cardinals’ 13-3 victory over the Cubs in the second game of a doubleheader at Wrigley Field in Chicago. Teams will play 13 games against each division rival next season and will host all of the 29 other clubs at least once every two seasons as Major League Baseball switches to its first balanced schedule since 2000. (AP/Paul Beaty)

NEW YORK -- Every major league team will play each other in the same season for the first time next year as the sport switches to its first balanced schedule since 2000.

As a result of the format switch agreed to in the March lockout settlement, high-profile games between division rivals such as Yankees-Red Sox, Dodgers-Giants and Cubs-Cardinals will be reduced from 19. Intradivision games will drop from 47% to 32%.

A team will host all of the other 29 clubs at least once every two seasons.

"I think it's great for the fans," Mets Manager Buck Showalter said. "I'm so tired of playing the same people."

Major League Baseball said Wednesday it will open the 2023 season on March 30 and again will try to have every team start on the same day, which last occurred in 1968.

"This new format creates more common opponents, both in the division and among your league opponents, so that typically when you're competing for the wild card, there's a much higher percentage of common opponents across divisions," said Chris Marinak, MLB's chief operations and strategy officer. "And we think that equity is good for the competition on the field.

"On the marketing side, we think that the new schedule gives our fans more opponents at home, so they get to see a broader array of clubs in their ballpark," Marinak said. "And probably more importantly, it gives us a chance for our star players to get exposure more nationally and be seen in more places throughout the season."

The American League used a balanced schedule from 1977-2000 and the National League from 1993-2000, with interleague play starting in 1997 and limited to 15-18 games per season for each team. Then-Commissioner Bud Selig had pushed for a return to an unbalanced schedule.

AL openers have Baltimore at Boston, the Chicago White Sox at Houston, Minnesota at Kansas City, the Los Angeles Angels at Oakland, Cleveland at Seattle and Detroit at Tampa Bay.

NL openers are Milwaukee at the Chicago Cubs, Pittsburgh at Cincinnati, Arizona at the Los Angeles Dodgers, the New York Mets at Miami, Colorado at San Diego and Atlanta at Washington.

Interleague openers have San Francisco at the New York Yankees, Toronto at St. Louis and Philadelphia at Texas.

Other home openers are the Giants at the White Sox and the Mets at Milwaukee on April 3; San Diego at Atlanta, the Dodgers at Arizona, the Yankees at Baltimore, Boston at Detroit, Houston at Minnesota, Miami at the Mets and Cincinnati at Philadelphia on April 6, and Seattle at Cleveland, Washington at Colorado, Toronto at the Angels, the White Sox at Pittsburgh and Kansas City at San Francisco on April 7.

Toronto opens with 10 road games before hosting Detroit on April 11, a request made by the Blue Jays because of construction at Rogers Centre.

The schedule usually is updated with game times during the winter.

Next year's start is the earliest since 2019. The season will revert to 186 days from the 182 it was shortened to this year due to the lockout.

Travel is roughly the same as the prior format, which had teams play 76 games against division foes, 66 against other clubs in the league (seven vs. six teams and six against four teams) and 20 interleague.

Other than within its own division, a team can host or visit a maximum of three teams from another division.

A screen at Dodger Stadium shows late broadcaster Vin Scully during a tribute to him before a baseball game between the Los Angeles Dodgers and the San Diego Padres on Friday, Aug. 5, 2022, in Los Angeles. (AP Photo/Jae C. Hong)